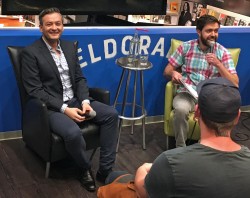 Within the confines of the typically left-leaning liberal European governments lies a country in a bitter battle with the ultra-conservative right. Robert Biedron, a former parliament member and current mayor of Slupsk, entered the Polish political arena in 2011 as the first openly gay elected official in all of Eastern Europe. He’s been chipping away at the controversial face of domestic democracy ever since.

Poland is a country that’s testing the limits of modern democracy and putting citizens on the shaky ground of individual liberties versus religious and political tradition. In 2015, the country saw a complete political sweep of the Law and Justice party in Parliament. The party’s aim is to undo the policies that were passed by what they view as liberal, un-Christian and unpatriotic former politicians.

Biedron has stepped up as a symbol of hope, change and progress for many Polish citizens. In the face of the uphill battle in front of him, Biedron doesn’t let it get him down. “I’m an optimist,” Biedron said, “I wouldn’t be here if I wasn’t.” Biedron’s transition from gay activist to politician wasn’t necessarily a predictable one.

“If you had met me 20 years ago it would have been unimaginable for me to call myself a Polish politician because of the situation I was in,” Biedron said, “I am gay. I’m an atheist. In very conservative Poland, it usually means you have no chance to be in public life.”

Biedron was invited to open Oslo Pride 2016 with a panel discussion on political activism with other gay rights leaders. The next day, a discussion was hosted by Jeff Lugowe at Pride House, where Biedron was able to discuss his individual story and take questions from the audience. There was no shortage of an eager audience, with attendance skyrocketing for such an event on a Saturday afternoon. It was further proof that Biedron’s impact has gone far beyond the borders of Poland. He has become a political leader for gay rights and progress across Europe.

It’s a position that Biedron doesn’t take lightly. After he established Poland’s Campaign Against Homophobia in 2001, the first LGBTI organization dealing with social injustices in Poland, his life as an activist began. For the next decade, Biedron would spend his time promoting acceptance. Soon, however, his path would take a turn. “I found out that being a gay activist was not enough,” Biedron said, “I needed to do more.”

Biedron’s political campaign did not focus on his sexuality, but instead on him being a visible and accessible human being. His approach was simple, “People see me. People can touch me. People can spit on me. People can hate me. People can do something with me as a person because before they didn’t have any occasion to meet a gay person,” Biedron stated, “I think this was the recipe for winning the elections. I spent a lot of hours on the streets talking to people. I knew this was the only chance I had to persuade people.”

Biedron’s struggles didn’t end with his historic election to Parliament. “When I entered Parliament the reaction was terrible. I remember my first speech in front of the whole Parliament and government. I was defending my colleague by saying, ‘Your arguments are below the belt.’ And they started to laugh and I didn’t understand why. So I repeated it and they laughed again. Then the media asked them why they laughed. Many of the members of the parliament said, ‘We’re laughing because he’s gay and gay people can speak only about sex.’”

These stereotypes weren’t easy to overcome. “Being a member of parliament in Poland, the first two years it was a disaster. I was beaten up several times,” Biedron said, “In the modern history of Poland there’s not even one incident of beating up a member of parliament, except me. People were calling me names, but I knew if I wanted to change something I needed to survive that.”

Biedron saw his same battles reflected in his female associates in the misogynist society. “Many of my female colleagues were struggling with the same story,” Biedron said, “They were focusing on how they look and how they dress but not what they were talking about.”

Biedron then made an unusual decision. Before completing his first term in parliament, he made a run for the position of mayor in the modest town of Slupsk, the 40th largest city in Poland.

Biedron explained the transition easily. “Being a mayor is practical,” he said, “Being a member of the parliament is more ideological.” Biedron feels like being a mayor gives him more of an ability to influence policy. “You have direct influence on issues,” Biedron said, “You can shape the city; you can talk to people directly.”

By Sabrina Hornungsabrina@hpr1.comFargo artist signs Nashville recording contractTo say the 2020s got off to a rough start might be the understatement of the century, but Fargo musician Gina Powers managed to find her own…