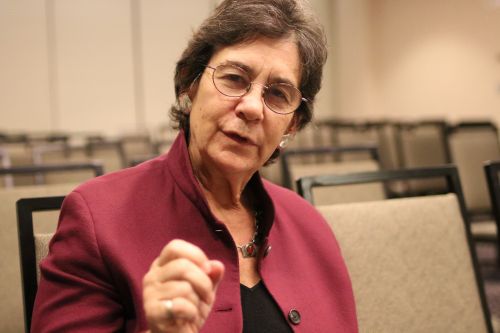 FARGO — In some places across the state the words Planned Parenthood are spoken as curse words, but the facts say differently: abortions are down, young women are finding information and assistance, and the poor can afford to plan their families.

“It’s always like a curse word until they need the help,” Kathryn “Kitty” Kolbert said before speaking at the 15th annual Progress on the Prairie Planned Parenthood event Tuesday night. “And that’s been my experience over the years - picketing every day and then when their daughters need abortions bring them into the clinic, but they want to come to the back door because they’re embarrassed about it. To me the public policy debates always revolve around exceptions to the rules.”

Kolbert, is a public-interest attorney credited with saving Roe v. Wade in 1992 when she argued Planned Parenthood v. Casey before the U.S. Supreme Court. She flew into Fargo to speak at the Progress on the Prairie event. Kolbert is also the former president and CEO of People For the American Way and a cofounder of the Center for Reproductive Rights. Today, she’s the producing director of the Athena Film Festival, which focuses on stories from “fierce and fearless women.”

Under President Donald Trump’s Administration, Planned Parenthood has come under attack and funding has been cut, Kolbert said, which is not the best method for reducing abortions.

“The real way to fix it [abortion] is to reduce the numbers of unintended pregnancies,” Kolbert said. “To make it so we see fewer women facing pregnancy when they don’t want to be pregnant. Actually we’re making great progress toward that.

“This year, for the first time in five years, we’ve had the lowest amount of abortions in the country. Now, some will think that’s because of the increased restrictions, but I don’t actually think that’s true because there doesn’t seem to be a difference between the more punitive states and the less punitive states. The difference is: increased access to contraception, Obamacare, which gives particularly poor women access to health care, reduced costs of contraception.

“If I’m right, I think what we’ll see in the next five years is an inching up of that number, because the Trump Administration has restricted Title X family planning funding. States are moving to reduce monies to Planned Parenthood. We will see a vast increase in teen pregnancy and unintended pregnancy and for every dollar you cut back you are likely to see many more dollars spent on abortion and unwanted birth. But that’s the compromise.

“The problem with that is that the people who oppose abortion also oppose some forms of birth control.”

Despite the decline in abortions nationwide, Kolbert believes Roe v. Wade will soon be overturned.

“I think it will be [overturned],” Kolbert said. “I’m not taking bets on when. I think they’re more likely to wait until after the 2020 election to allow states to ban abortions. Clearly there are five votes on the Supreme Court to do that. People say it will never happen, but it happened in my case, something most Americans are nor aware of. When they first decided Casey they voted five to four to overturn and allow states to ban abortion again, and then Justice [Anthony] Kennedy switched his vote. It’s very likely that the issue will be returned to the states, which will only increase the craziness and the hyperbole that is going on now.”

If political parties were to disappear tomorrow, the U.S. Supreme Court justices will still remain, she said.

“Mitch McConnell’s legacy is control of the Supreme Court, and that was a gift to the evangelical, critical part of the Republican Party,” Kolbert said. “That’s what he came into office to do, and that’s what he’s done.”

Back when Kolbert began her career, independent credit for women did not exist; their husbands had to sign for a car loan, and there was no such thing as protection from abuse, Kolbert said.

“There wasn’t even a word for domestic abuse at that time,” Kolbert said. “It was a very interesting time, and the changes that have happened in my lifetime have just been extraordinary.”

Going back further into history, the changes have been even greater, Kolbert said.

“In my lifetime the changes in the law, the increasing recognition that women ought to be equal in society has been monumental. The roles of men and women in society, these predestined or preordained views of society where men are in control and women are not, it’s generational, if you talk to younger people, even younger evangelicals, the idea that men are the controlling influence in all families — it’s just not as strong. It’s really weakened significantly, and the anti abortion sentiment weakens the younger you get, so I think over time we will see some change here, and demographically the country is changing as well.”

Today, the nation is polarized with the abortion issue front and center.

“Obviously the nation is deeply divided, but the difference is in recent years, that division now is along party lines as opposed to in my day there were pro choice Republicans and anti abortion Democrats. We had a middle. Today, we have no middle, and I think that is a big disservice to our political discourse.

“It started with the rise of the Moral Majority and the alignment of the fundamentalist religions, and the Mormon and the Catholic churches with the Republican Party, but I don’t attribute it only to that, I also attribute it to populism and there are a lot of complex political reasons for that.

“There are 23 states in the nation that has trifecta control, and there’s about 18 states in which Democrats control, and those are primarily pro choice. It is party leadership that controls the issue. That’s a pretty serious divide, but until we start seeing some shifts in that, this will be an issue that will keep with us.”

Social media and cable news has also exacerbated the split in America.

“I think social media makes it worse because it highlights only your own point of view, what you see is your own viewpoint,” Kolbert said. “I think the rise of Fox News does exactly the same thing, so it’s not just social media, it’s cable news and multiple outlets. And frankly, I’m not a conspiracy theorist, but I think there are orchestrated efforts to try to intentionally spread false narratives.

“When I say it that the change started with the rise of the Moral Majority is because at that point they realized the abortion issue was the single issue that aligned many of their key coalition partners, and today that’s still true.”

One message Kolbert wants North Dakotans to hear is that Planned Parenthood is helping bring down abortion cases.

“The thing about North Dakota is that there has always been a deep concern for the health of its citizens,” Kolbert said. “It does lots of things very well. This is a good place you want to raise your family, but to me what is important though, is to make sure that everyone has access to both information, sex education, and birth control and contraception so you are able to plan your families according to your own needs. It doesn’t need to be up to chance. Basic health care, particularly reproductive health care for young women and poor women is critical to the well being of the people in North Dakota, and Planned Parenthood does that very well.”