There’s something to be said about a good bar. The really good ones serve as a sort of community living room, bringing folks from all walks of life under one roof. If you’re really lucky, these sacred spaces can even serve as a cultural hub.

Ralph’s Corner Bar in Moorhead just so happened to be one of those spaces before it was demolished in 2005. Not only was it the oldest bar in the area: it became a rock n’roll destination, a creative hub and overall home for the countercultural weirdos and misfits of F-M, and we mean that as a positive.

This month, the much-awaited Ralph's Corner Bar exhibition opens at the Historical and Cultural Society of Clay County (HCSCC.) The folks at HCSCC have spent hours collecting histories and artifacts to recreate the iconic barroom. HCSCC will be partnering with Jade Presents for a variety of music events to celebrate the exhibition.

What made Ralph’s so special, and what inspired the curators to recreate this iconic music destination?

We had the opportunity to chat with Markus Krueger, HCSCC Programming Director, about the upcoming exhibit. And interestingly enough, it started out with mention of a Ralph’s urinal that wound up in a Jamestown ball diamond of all places…

Markus Krueger: So it's weird. With this exhibit, we were trying to find all these things, and just talking to people and finding out where they are. You know, we all have our holy grail items that we wanted to find. And then we'd find it and then we'd look for another holy grail item and we find that and so that's one of the cool things about this exhibit – it's not just an ordinary bar.” There have been a lot of bars over time that have closed in Moorhead over the past 150 years that we've been a town. I think for the Pink Pussycat we got like a swizzle stick. But for Ralph’s, with a lot of help we have most of the furniture accounted for.

High Plains Reader: That is so wild! Why do you think that was?

MK: It was the center of a community of people and so many different kinds of people. We've done over 40 recorded interviews with people and that doesn't even count like a million or at least 100 informal interviews, and just me engaging with the Ralph’s Facebook group.

What everybody always says is that Ralph’s had such a variety of different people. It was a place for misfits, it was a working class bar, it was a classic Minnesota neighborhood dive bar, and it was probably the most important independent music venue between Missoula and Minneapolis. It's cheers and CBGBs at the same time. 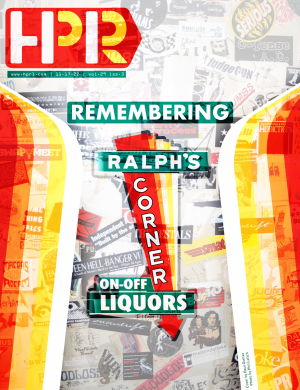