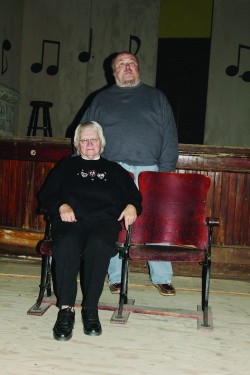 A rural community’s effort to save a cultural treasure

The Ellendale Opera House is a rare gem hidden two hours southwest of Fargo on the south-central North Dakota prairie. Built in 1909, it was the largest venue between Minneapolis and Seattle in its day, and it is one of the few of its kind still standing. The initial purpose of the Ellendale Opera House was to serve as a cultural and social hub for the area, though it has encountered a few hiccups along the way.

A few individuals in this rural community aim to see this three-story brick gem restored it to its former glory.

In 1907 a fire devastated downtown Ellendale. With the future of their community in mind, a group of businessmen took to the streets to solicit funds from the community to build a beautiful three-story brick opera house, which was also the first building to have electricity in Ellendale. People came from miles around to attend the events housed here. During its grand opening in 1909, guests were entertained by the Chase-Lister Theater Company, a traveling theater company based in New York City.

The first story serves as the gallery or lobby. The second floor houses the auditorium, which is truly breathtaking. It provides a stage area, ground-floor seating that could be cleared to serve as a dance floor, which was also known to serve as a roller rink. The third floor provided balcony seating. There were also a few offices in the building -- one doled out ration cards during World War II.

There were travelling acts such as The Flippers and The Red Dogs. Even Bobby Vee played there with his band before he struck it big. Lawrence Welk was reputed to have played there before he had his big break. “Rumor has it -- but I can’t substantiate the story -- that Lawrence Welk played up here,” said Jeanette Robb-Ruenz, former President of the O.P.E.R.A board. “I couldn’t find any documentation, but there was a woman in town (who’s long gone now) who says she saw him play and even danced with him here. She said ‘He might be a fine musician, but he was a terrible dancer -- he stepped all over my feet!’”

The Ellendale Opera House served as a social hub for many years but sadly fell into disrepair in the 1980s, and the remaining businesses soon vacated. Robb-Ruenz was an instrumental figure in seeing the opera house saved. Non-profit organization O.P.E.R.A., Inc. started renovations once the building was obtained from the city. Since 2002 the roof has been replaced, the back wall restored, the auditorium subfloor was repaired and the list goes on.

One of the most noticeable features other than the grand scale of the opera house, are the murals that cover the boards on the upper levels of the facility. They were painted by an Ellendale artist who found himself in a bit of trouble and sought a more creative venue in which he could complete his community service.

When the opera house was abandoned in the 1980s the city boarded up the windows. The artist in question proposed that he paint a series of scenes of events that occurred at the opera house to honor its history. The following summer the same artist proposed that they remove the top panels to be painted.

Fortunately, a construction company was working close by and helped remove the panels with the aid of a scissor lift. They even returned once the project was finished and helped to put the panels back in place. The artist immortalized the construction crew on one of the panels.

Nearly $275,000 of the needed $2.5 million dollars has been raised through private donations, grants and fundraisers. In 2007 Ellendale celebrated its 125th anniversary and invited past, present and future Ellendale-ites through the doors of the facility. “It looked like a dilapidated building falling down to most people driving by,” said Ken Schmierer, O.P.E.R.A and Ellendale Arts Council board member, “but we had to let them see that we were doing something.”

The folks at O.P.E.R.A have seen both victories and frustrations over the years. Schmierer explains that in a city of 1,500 people it is difficult to rally support for such an endeavor. “We need new blood on the board. One board member, John Wheelihan, is 98 years old. We need people with energy and new ideas.”

The first art show it housed was a collection of work from local artists living and deceased. Hundreds of people came through the doors -- including Gov. Hoeven.

Since then, the Ellendale Opera House has housed numerous plays, concerts, social events and exhibitions of artwork from regional and nationally recognized artists. Six exhibitions were brought in by the North Dakota Museum of Art, as well as two Smithsonian exhibits courtesy of The Ellendale Historical Society and the North Dakota Humanities Council.

During the month of December a collection of work will be for sale, with all of the proceeds to benefit the Ellendale Arts Council. The event started out as a wreath auction but eventually became a holiday art show. The exhibition has work from Shane Balkowitsch, Shelly Bundy and the Prairie Paul’s studio, to name a few.