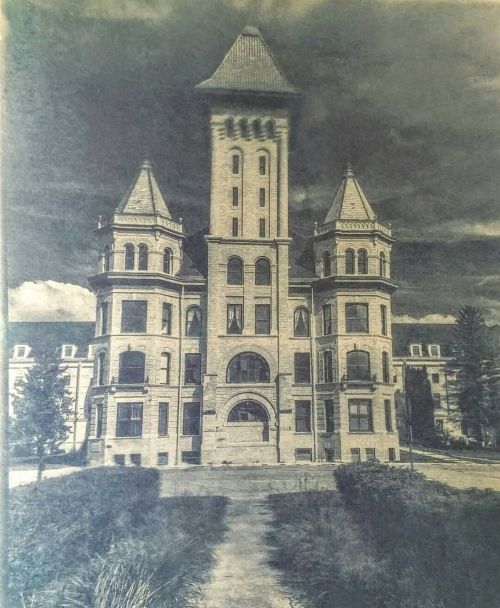 In early October 2018, I had the opportunity to participate in a two week Hinge Arts Residency in Fergus Falls Minnesota. The application wasn’t as hard as I thought it would be but I still sweated my way through it. Naturally I was pleased as punch when I found out my proposal was accepted. As part of the residency I stayed in a beautifully renovated apartment just off the grounds of the former Fergus Falls Regional Treatment Center also known as the Kirkbride. Resident artists accommodations are in what used to be the former male nurse's dormitory. I really like to describe the time that I spent there as a much needed "two week work-cation."

The program offers three different residency tracks. Career Development helps the artist focus on their own projects. Such as learning a new medium, starting a new body of work or even working on recording a new album. Keep in mind, these residencies aren’t just limited to the visual arts. Performances artists, filmmakers, writers and musicians have all been “Hinge Artists.”

The second track is the Homecoming residency which welcomes Fergus Falls expats with open arms, reinviting them to collaborate and engage within their old stomping grounds. The third track is for Alumni. The Alumni residency invites those who had previously had a residency but want to elaborate on an idea or connection from their last time working within the Hinge Arts program.The Hinge Arts residency is made possible thanks to Springboard for the arts which is a community minded program fueled by artists for artists. 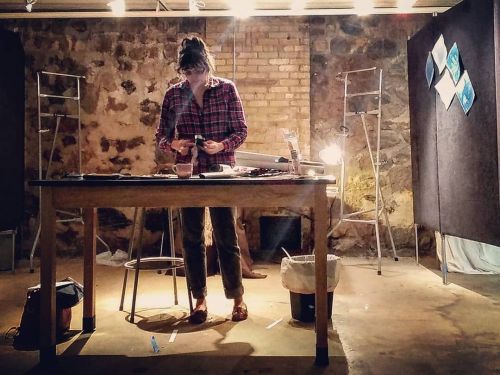 There was a light thunderstorm during my first night there. I was curled up in my daybed in the efficiency apartment provided, trying to fall asleep, listening to the falling rain. Between lightning flashes I could see the towers of the Kirkbride in the distance and I thought to myself, this is exactly where I should be right now.

As part of my proposal I planned on creating a series of cyanotypes from photos that I took while on the last tour of the Kirkbride a few years before. Prior to my proposal it had probably been a good three years since I had made a cyanotype--cyanotypes are an antiquated photo process that are essentially what blueprints are made of. I didn't really have the time or space to fully set up but this opportunity provided me with both time and space to create.

I had a head and hard drive full of images that needed to be transformed. Plus I just so happened to have a few photos from the last tour that was offered in the Kirkbride and this seemed like the perfect series to get back in my cyanotype groove. Unfortunately the Kirkbride is no longer open to the public and parts of the grounds are currently going through periodic demolition, but you are able to explore the grounds within the proper boundaries, keep in mind that the building is under heavy surveillance--but you can still get some killer photos regardless.

The Hinge Arts residency program was launched in Spring 2015, with the intent to create opportunities for artists and to encourage those artists and community members to connect and navigate themes of transition, and innovation inspired by the community’s 124 years of hosting a state mental institution. According to springboardforthearts.org, "The name 'Hinge' is inspired by a belief that artists play a key role in connecting our past with our future. The name is a deliberate response to the word 'unhinged' as it relates to mental illness." 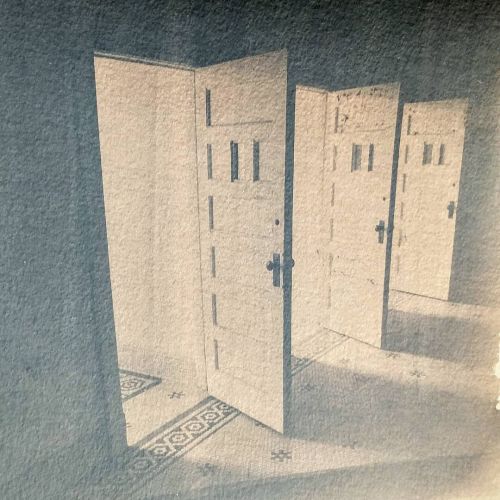 The Kirkbride has often been referred to as “the castle on the hill” and it has inspired, shocked, awed, and provided economic stability to the community of Fergus Falls, Minnesota until the state closed its doors in 2005. It's hard to find anyone in Fergus who doesn't have some kind of a tie to the facility.

The Hinge Arts Residency program at the Kirkbride is a community development and artist residency program in Fergus Falls which encourages cultural programming at or related to the historic Fergus Falls State Hospital, or the “Kirkbride Building.” The program is open to artists all over the United States and it provides 2-6 week artist residencies which include housing, career counseling, 24 hour access to an amazing studio space below the Kaddatz Gallery, and a community full of folks who are more than willing to answer any questions you may have, whether you're asking for directions, collaborations or help with your creative process.

Plus the folks at Springboard will clue you in on all the hotspots and goings ons of Fergus. A few of my favorite spots were The Spot, The Viking Cafe and Union Pizza. 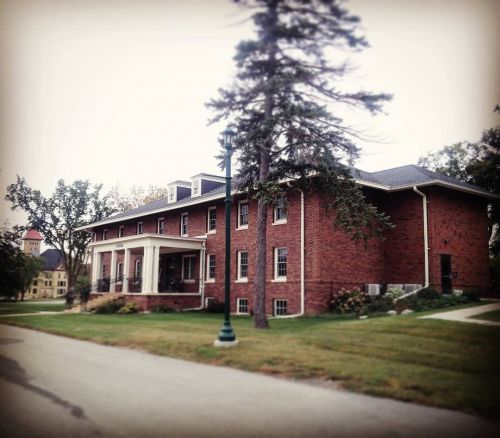 The studio space provided through the residency is made possible through a collaboration between Springboard for the Arts--the organization behind Hinge Arts and the Kaddatz Gallery--which are both located in downtown Fergus Falls. The Kaddatz gallery provides exhibition space as well as a classroom space plus the gallery also hosts weekly figure drawing session on Fridays. Hinge artists also have access to the archives at the Ottertail County Historical Society and the local library.

The next deadline for a Hinge Arts residency will be March 1st, 2020 for residencies taking place between July and December 2020.