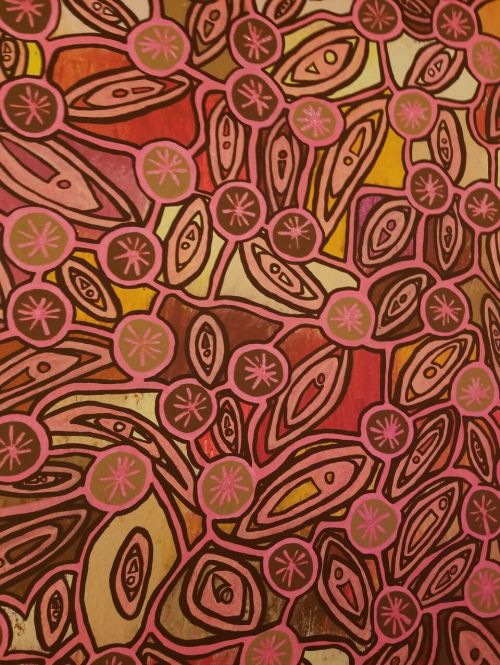 The red candles at each table gave the place some romantic ambiance, while cardboard hearts, bubble wands, and gag glasses made for some lighthearted photo ops.

The party began with a live performance by the local musical duo, So Sad. Later in the night there was a raffle for shirts, CDs, coupons, and other prizes donated by local businesses. The proceeds from this raffle were donated to Fargo’s local Planned Parenthood branch.

The artwork itself ranged from paintings, sketches, prints, sculptures, doilies, and needlework.

One of the drinks, Satan’s Mistress, was available for that night only.

Vaginal imagery is a common theme among these pieces. “Hole Lotta Love,” an acrylic painting by Stephanie Sorenson, contains a cluster of shapes in various shades of pink, while “Pierced,” a series of crocheted doilies, had images of female genitalia printed on them. Laura Forgie’s three-piece set, “National Pornographic,” combines fabric printing with needlework to create images of women pleasuring themselves.

Among the prints were Adam Bursack’s “Emily,” David Cortez’s “The Woman and the Rhinoceros,” and Nemo Siquerios’s “Shiro Desnuda.” The first two portray female models, while the third, a digital print, portrays a nude male figure reclining on a bed.

Another mixed-media sculpture, Christina Johnson’s “Stardust,” doubles as a clock, with sequins in place of numbers and a hand topped with a crescent moon. The clock’s face is a woman floating in space among stars and other celestial bodies.

The exhibit will be on display for the whole month of February.