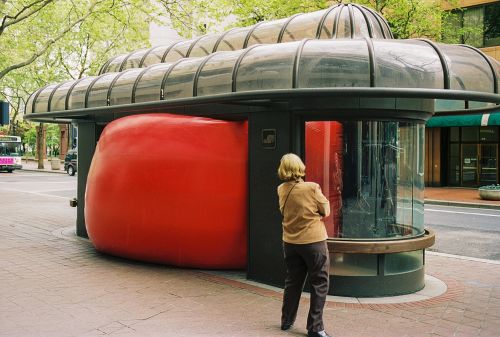 On Oct. 4 “The Redball Project” will bounce its way to Fargo-Moorhead from Chapel Hill, North Carolina.

For seven days, between 11 a.m. and 6 p.m., the 15 foot ball will travel through the community with a new location each day. The ball will be squeezed in between buildings, placed on bridges and alleys around town.

“I’m really excited about the piece in general, to see how the community will respond,” said Andrew Maus, the director and CEO of the Plains Art Museum in Fargo.

Maus explained the idea of Fargo becoming a part of a global narrative, as Fargo will be the 33rd city, as well as one of the only smaller cities in the world, to host the project.

“It’s important for Fargo because we’re at the cusp of really embracing public art as a community,” he said.

It started with a conversation between Brad Bachmeier, professor of art education at Minnesota State University, and Kurt Perschke, the artist behind the project. Bachmeier pitched the idea to the Plains Art Museum and, after a site visit in June, Perschke imagined what “The Redball Project” could achieve in Fargo-Moorhead.

Perschke, currently living in New York City, works in sculpture, video, collage and public space. According to his artist statement on redballproject.com, he uses his work to help facilitate new and creative encounters within everyday life.

“Projects [like this] don’t just happen,” Maus said. “MSUM and the Plains engaged the community.” Indeed, the installation coming to Fargo became a community project, as support comes from the Fargo Arts and Culture Commission, Fargo Parks District, Incite to Action Consulting, the Fargo Moorhead Convention and Visitors Bureau and other donors and sponsors.

One of the goals, according to Maus, was to get the Fargo-Moorhead community to work collaboratively. The two cities worked together to give community members a chance to engage their imaginations.

The Redball Project is described as provocative and makes people ask questions, one of them being “is this art?”

“Through the magnetic, playful and charismatic nature of the RedBall, the work is able to access the imagination embedded in all of us,” Perschke said, as written on his artist statement. This installation will allow community members to challenge and re-imagine their own spaces and see a break in their daily routines.

The first location for the Project will be at the Plains Art Museum’s 7th street entrance. A panel discussion featuring Perschke will be held for a conversation about public art. The panel will be on Thursday, Oct. 4 from 6 p.m. to 8 p.m.

For more information about the piece visit www.redballproject.com.

The complete schedule for “The Redball Project” locations are: