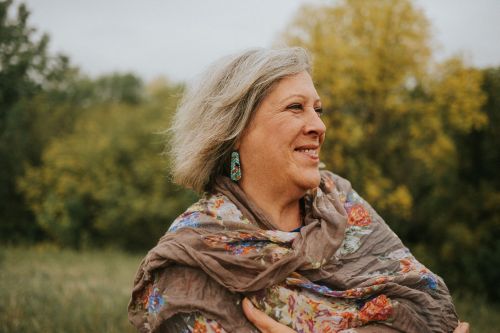 “I started to look around at state arts council positions because I felt that even though I had never done that, I felt like it would be a really good blend of skills, so I started to look around in 2016. A few jobs came up but I knew I didn’t want to work for a large state agency,” Kim Konikow, executive director of the North Dakota Council on the Arts (NDCA), said.

She went on to say, “I can’t say I ever thought about North Dakota. It was not on the top of my list but it was a very interesting position and when I came for my interview in December of 2017, I learned a lot -- and I had done a lot of homework. I really felt like this was a state where there could be some transformation.”

“I’d been in southern Utah for 18 years and I knew it was time to leave.”

By the end of her interview in 2017, she knew she had the job. Five weeks later she was on the highway heading for the prairie, with a good friend sitting co-pilot and her 72-pound poodle Maisy in the backseat.

Originally from Detroit, she’d developed an interest in the arts at a young age. Her father was a children’s dentist by day and President of the Detroit Chamber Music Society by night. Her mother was a docent at the Detroit Institute of the Arts. She remembers her mother studying for museum tours by practicing in front of her two daughters. When she gave those tours the two girls had full run of the museum.

As a young adult, Konikow went on to pursue her undergrad in art history and theater. She then went on to earn a masters in theater direction and arts administration. “I don’t dance, I’m a terrible musician, I like to sing, but not well. I love to take photos but I’ve never really been an artist, a maker. I feel like it is an art, though, to be a good administrator.” she said.

From there she worked as a consultant. She did a lot of work with strategic planning and worked closely with boards of directors. She also worked with a number of small to midsize arts organizations in Utah. “I did a lot of work with independent artists where I was particularly interested in how do you get from one level to the next level? What steps do you have to take? What do you have to do to have a career in the arts?” In that time she did some teaching and a lot of organizing.

The High Plains Reader ventured to the NDCA office in Bismarck and had a chance to connect with Konikow and chat about the state of the arts in North Dakota.

High Plains Reader: You mentioned you found North Dakota appealing because you believed there was room for transformation…

Kim Konikow: When I first got here, Ashley (Thornberg) from Prairie Public did an interview and one of the first things she asked me was, what do you think of North Dakota artists? Without hesitation I said, do good work and put your head down. She paused for a minute and said, Well, that’s North Dakota!

My feeling is, that doesn’t work well for art. I feel like that puts us in a position to prove our value--and we shouldn’t have to. We’re a part of culture, we’re a part of society, it is the demonstration of who we are and what we do as a culture.

I feel that we here have an opportunity to learn how to put our heads up and to speak about the work that we’re doing and why we’re the person to be doing it and who we are doing it for. I’m not suggesting that we brag but I am suggesting that we have pride, there’s a big difference between those two words and I think that’s what’s really important about where this transformation could occur.

There seems to be...not a fear but it’s just a North Dakota thing. I think it makes sense. You do good work and it pays off. You don’t get recognition for that first of all. We have to accept the recognition before we can expect other people to even comment on it.

HPR: What kind of upcoming opportunities should people be aware of through the NDCA?

KK: I think the most important thing to be known is that we’re going through a strategic planning process right now, so normally that’s been a three-year plan. This one will be a five-year plan, which I think will make us think a little bit more broadly. We’re looking at the grants programs to see how we can maybe -- without scaring anybody -- decrease them...but then have greater impact and then utilize the funds for more community-based projects. I have something in mind that’s potentially statewide-big, to look at our eight regions and to potentially do a public art project in each of those regions.

What can we do that’s big enough for a region and involves more people, to include artists, arts organizations and community centers to bring people together? But that’s probably a little way down the road. In the meantime, we have our individual literature and music fellowships coming up, then there’s artist in residence... institutional supports are being reviewed because we’re on a legislative funding cycle. There’s not a lot of change that can happen quickly but my idea is to think more long term. How we can really spread the value of the arts and show a greater impact by doing more community-based rural projects that bring people together in a bigger way.

HPR: I keep reading about potential cuts to the National Endowment for the Arts (NEA). How is that affecting the NDCA?

KK: Knock on wood, surprisingly it’s not. In fact, I just said this to the Senate House Appropriations Committee, but every single year there are efforts to disband the NEA as well as the National Endowment for the Humanities and Public Broadcasting. Every year there’s an outcry to ban them and cut that funding. Knock on wood, they never go all the way. There are such strong advocates around the country, particularly in Washington DC. The two big ones are Americans for the Arts and the National Assembly of States Arts Agencies.

The funding through the NEA has gone up, it has not gone down. Over the last eight years, we’ve received enough of an increase that at this point our bigger problem is in the state legislature because they have to match it. If they don’t match it we don’t get the federal money. So, we have not lost any NEA money. It’s a battle every year but they seem to win.

If the NEA went away, it would be up to the state legislators only, to fund their state’s arts programs and who knows, you look at here…and... we wouldn’t fare very well. They know they have to match that federal money, it doesn’t mean they would do it on their own.

KK: There’s some great stuff happening in North Dakota. I love that people are thinking about rural communities and I think that if we can just transform from watching our feet to looking up at the sky and opening our mouths -- and really sharing our stories, I think that we’ll really be in much better shape than we currently are. I think there’s more that we can do when we’re ready to do it. I think the agency is kind of poised for helping this transformation take place and really helping artists recognize that they’re artists and being the best they can be with their professional development.

I love what I do.