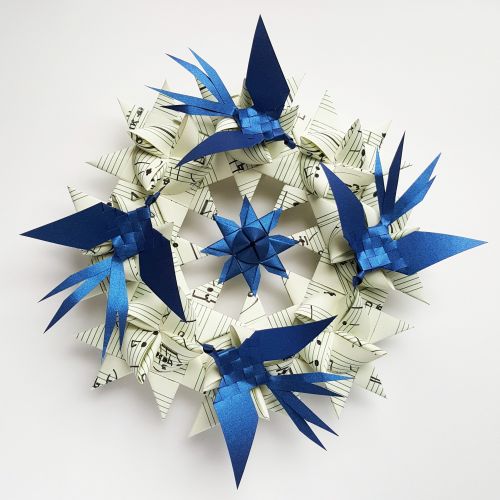 You may have seen Nicki Marie slingin’ her elaborately folded paper star creations at various craft and cultural festivals around the region. She was also a recipient of a folk art and traditional apprenticeship grant made possible for the North Dakota Council on the Arts and learned scherenschnitte and wycinanki through Tower City based folk artist Meridee Erickson Stowman in 2016. This Thursday, Nicki Marie’s first gallery exhibition titled, “Northern Stardust” will be opening at the Spirit Room in downtown Fargo. A total of 36 of her intricately woven pieces will be on view through August 17.

High Plains Reader: What initially attracted you to the paper arts?

Nicki Marie: You know, I think it started in school as a child--remember paper cooties or fortune tellers? I used to fold pieces of paper in half repeatedly until there was a grid of creases and then fold those creases in different directions to create imaginary rooms/dioramas. I would do this over and over again 'til the paper fell apart. I must have enjoyed the precision of it and creating something three dimensional out of a simple piece of paper.

HPR: Your birds and stars are beautifully folded and woven--which is no easy task. Can you tell us a bit about this process?

Nicki Marie: Lots and lots of paper strips! Each star has four strips of paper, folded in half... working with eight ends and each step repeated eight times - folding and weaving ends back in on themselves. Both stars and birds start with a simple basket weave (over-under-over-under). Traditionally, they were done with strips of birch bark or preserving paper stars by dipping them in wax and sprinkling glitter on while wax is still warm.

HPR: Were these stars and birds rooted in family tradition?

Nicki Marie: No, not mine, but I do remember making paper chains with my mother during the holidays and I must cling to that feeling of creating something festive to decorate and brighten a space.

HPR: You’ve been a part of German Kulturfest and various other cultural festivals in the area. How long have you been participating in these festivals and what drew you to them?

Nicki Marie: I’ve been doing them since 2015, wanting to learn more about my own heritage, searching for a sense of belonging and wanting to connect with others in the community.

HPR: How long did it take for you to prepare for your “Northern Stardust” exhibition?

Nicki Marie: I started in May. Since it's my very first gallery exhibit, I wanted to recreate a few favourites from the past years along with creating new pieces specifically for this show that reflected more of where we are seasonally and where I am as an artist. It's a small sampling of paper star variations that hopefully honours and helps keep this traditional art form alive.

HPR: What draws you to the bird and star imagery?

Nicki Marie: They are both very good reasons to keep looking up!

HPR: Tell us a bit about your apprenticeship with Meridee Erickson Stowman, how did you hear about the traditional art and folk art apprenticeship program?

Nicki Marie: I was selling star decorations at the German Folk Festival over at Rheault Farm in Fargo in 2015 when Troyd Geist (ND Folklorist) saw my booth and approached me about my experience with paper cutting and recommended I apply for an Apprenticeship.

HPR: Prior to your apprenticeship did you do too much with 2D paper work or were you primarily working on three dimensional work?

Nicki Marie: I used to do a lot of collage back in high school and mail art in my swapping days previous to my star slingin'.

HPR: What's the most difficult part of your process?

Nicki Marie: I suppose finding unique paper that is weavable--strong enough to handle pulling, but won't crack or break when folded. Hunting for paper is also one of the fun parts.