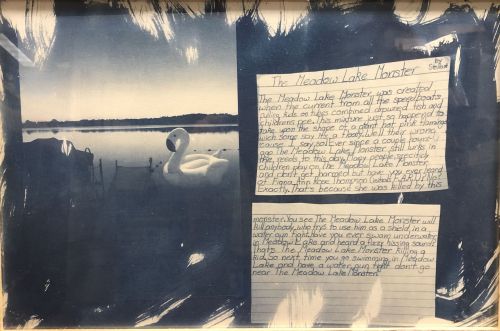 Earlier this autumn, the Hjemkomst Center began an exhibition which is currently on display called “SuperMonsterCity! - A Celebration of Monsters, Superheroes, and Villains."  It contains a selection of almost 200,000 films, toys, posters, and games that were collected by co-founder David Barnhill and curated by co-founder Stephen Yogi Rueff of SuperMonsterCity. The exhibition pays homage to the long and rich history of American pop culture, with a special focus on the monsters, superheroes, and villains that continue to be one of the public’s fixations.

The exhibition proved to be very popular and gained a lot of positive publicity so it only made sense that when the Constraint Show was deciding on a theme for this year that it would follow in its footsteps. Beginning in 2010, the Constraint Show is an annual exhibition series put on by Fargo-Moorhead Visual Artists (FMVA). “FMVA is an art advocacy non-profit whose goal is to provide exhibition opportunities for regional artists, be a community leader and educator in the arts, and promote a culture of fun and social engagement,” said Jesse Suppa, a Fargo-based sculptor who works primarily in wood and is also the head preparator at the Plains Art Museum and has been on FMVA’s board for almost a year.

Every year, the Constraint show decides and gives the FMVA a chance to challenge themselves by creating work within a certain theme, or “constraint”. This year, of course, they are drawing inspiration from the popular SuperMonsterCity exhibition with the theme “Marvels, Monsters, and Memorabilia”. Regional artists will submit work based on their own interpretations of the marvels, monsters, and memorabilia found in the aforementioned exhibition. “One can expect to see abstractions and likenesses of historic heroes and contemporary creeps,” said Suppa.

Patrons of all ages are welcome at the reception for “Marvels”, with light refreshments being offered. Those who are of age can also partake in wine as well as beer that will be contributed by Drekker Brewing Company.

Aspiring local artists may be interested in submitting their own works. Unfortunately, it is too late to take part in this year’s exhibit, but there are always future opportunities. “If a reader would like to be a part of future FMVA exhibitions, we offer annual membership, including a discounted student rate to anyone who would like to gain access to our community of artists,” Suppa said. “FMVA hosts four annual art shows that members can submit work to, free public art critiques, free artist talks, and a free annual studio crawl.”

In the meantime, however, both aspiring artists and art appreciators are bound to enjoy themselves at this year’s Constraint Show. Considering the prevalence of super-powered individuals and creepy-crawlies in television, film, and more, it doesn’t seem like the public’s interest in these pop culture mainstays is bound to abate any time soon.