Though Harvey North Dakota based photographer Lew Ableidinger has switched from film photography to digital photography and back he couldn’t avoid the analog.

“I returned to film because I wanted to start shooting large format, which corrects perspective and produces a negative with so much more detail and information than can be produced with all but the highest end digital equipment,” Ableidinger said.

“There's also something nice about having a physical object as opposed to just data on a hard drive. It also makes you slow down the process quite a bit, not just due to the inherent slowness of large format, but also because you can't fire off dozens of images within a few seconds. You have to take your time to get everything just right, and when it's done I may have just one or two images of a scene.”

When he’s on the field shooting he primarily uses a wooden 4x5 field camera with a tripod and a few lenses.

“I also carry around a Pentax 67 medium format camera in case I do need to do something handheld or a bit faster than the 4x5 allows,” Albeidinger said.

This setup, though cumbersome, proves to be his best icebreaker. He says the wooden camera and tripod are often mistaken for an antique, and a “serious” camera proves to be an excellent conversation piece. Ableidinger is a bit of a renaissance man, with a background in graphic communications, jazz performance, and now a locomotive engineer. As a photographer, the prairie has his heart. His work, “Driving Through Flyover Country” is currently on view at the Kaddatz Gallery in Fergus Falls. His work has been published both nationally and internationally and has been part of numerous group exhibitions throughout the country. 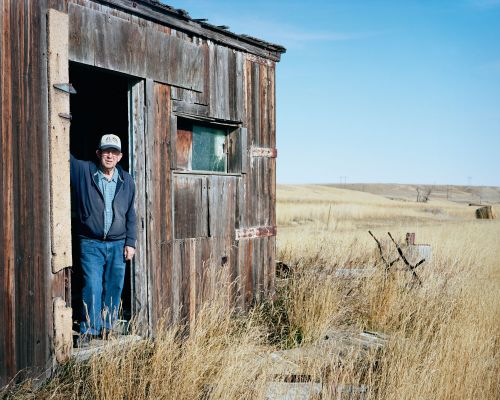 High Plains Reader: What initially drew you to the subtleties of the prairie?

Lew Ableidinger: It would probably be the fact that I grew up in the midst of the prairies. I grew up on a farm near Kensal, ND, and spent many hours staring at the landscape from a tractor window. That's a little different than watching the landscape go by a car window at 70 MPH, the slow speed of it gives you time to really study the subtleties of the landscape around you and the way the light changes as the day progresses and the weather changes. I suspect most farmers are actually keen observers of the landscape in a certain way as most could point out the exact location of a rock in the middle of a field with no discerning landmarks nearby it, they just know the land so well that they can pick out the location based on knowing the subtleties of the land. There's also something that's just imprinted in me to love the prairies and plains that maybe can't be described. For a time I lived in southern Wisconsin but I found I didn't do much photographing there, there was something claustrophobic about all the trees. If I wanted to photograph I usually went to northern Illinois, where the landscape is open and it is much more like home.

HPR: How do you feel about the phrase "flyover country?"

LA: It's both unsettling and yet very descriptive. People don't like to feel like they're not important and maybe even forgotten about and that's what this term implies. But it can also be used as a sort of updated version of "will it play in Peoria?" Politicians and businesses tend to see the entire "flyover country" region as a group of people that all think and act alike, which is entirely not true, and sculpt their message or product to appeal to the folks in flyover country, then quickly forget about them once they've gotten what they wanted. As I said it's also descriptive. There's no common ground to understanding that people out here may drive an hour just to get groceries. I would prefer the Midwest not be labeled with a simple, cute phrase but I chose to use this for the series as a way to draw attention to the region, almost everyone knows where flyover country is even if they don't know anything about it. 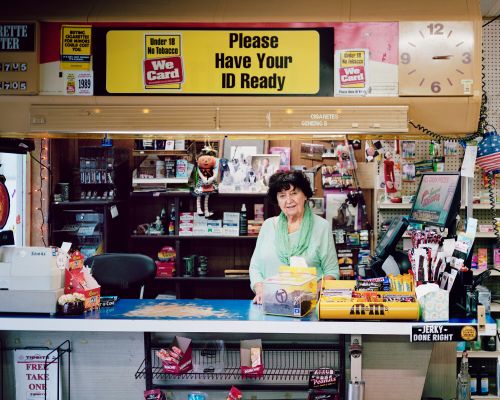 HPR: When shooting portraits, how do your subjects usually respond when they pose for you? Did you start out with candids and evolve into asking for a portrait?

LA: Most people respond they don’t really want to have their picture taken but those that do require patience. The nature of large format work mostly rules out candid photos so all require posing and a lot of patience while I make all the adjustments to the camera and focus under a dark cloth, so by the time I’m done with all of that they’ve usually settled into a more natural pose than the stiff pose they began with.

HPR: How fast do you see both our physical and social landscape changing?

LA: The physical landscape is always changing, though usually quite subtly. Buildings come down, new ones go up. Most of the changes seem to be the loss of historic buildings, but truthfully it would be hard to save them all. The social landscape is certainly changing as well with smartphones and the internet bringing the world to our living room, even in the most remote parts of the Great Plains. Dr. Tom Isern terms the current social condition of the Midwest as “post-rural,” that is to say not quite urban but no longer really rural either, and I would say that’s a good description. We aren’t tied to the small town we live in or near anymore, easy transportation allows us to shop and work elsewhere or even have UPS deliver things directly to our door. It’s a far cry from my grandparents days when 15 miles was a big trip and you could only get whatever was offered in town. The upside is more freedom and choices in where one lives, works, and shops. The downside is a loss in small businesses, less community, and a more homogenized culture.