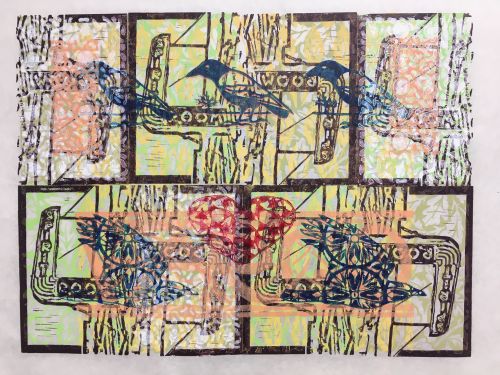 We are now in the deep, dark quiet of winter. The wind rages and the snow muffles even the busiest of city streets. People slow down, life seems muted as we try to pass by the cold nights inside with a book and a blanket.The mammals hibernate and the leaves fall and the birds fly south to warmer climes. Except for the crow. The raucous bird caws and screams its way through winter with us and we wouldn’t have it any other way. They may be common- you can’t go far without finding them flying around- but the small, clever birds have captured the imaginations of many. From ancient folklore to comic books, the little birds have made big and small appearances- as messengers and guides and both good and ill omens.

Crows and ravens pop up in mythologies around the world. They have been messengers, spies, gods and tricksters. In old Norse myths, the god Odin had two ravens, Huginn and Muninn, who brought him the news from Midgard (Earth). Depictions show him flanked by the two birds. In Greek mythology, they are the messengers of Apollo, the god of prophecy. They were said to be bad luck. They are the first bird to be mentioned in the Hebrew bible. In the Islamic story, a crow taught Cain how to bury his murdered brother. Since crows eat carrion, they were known to follow battlegrounds and have been associated with death and war. In Irish myths, the goddess Morrigan appears as a crow. She alights on Cúchulainn’s shoulder upon his death. In Hinduism, crows are ancestors and the practice of leaving food or pinda lives on today. Indigenous myths of the Pacific Northwest hold the crow as both the Creator of the World and a trickster god. The legend says the crow stole the sun and brought it to the sky, bringing life and light to the Earth. I read a news story about a couple who had been feeding the crows behind their house. One morning, they woke up to tiny pines threaded through a pop top. We can’t fathom the ways of birds- the intelligent crow continues to mystify and fascinate.

Dawn Morgan is very fond of crows. Thus, when she was coming up with ideas for a midwinter show for local artists, she decided to put out a call for crows. This was 2004. Every other year since, the crows come to roost at the Spirit Room. There have been painted crows, metal crows, stationary and mobile crows. There has been both poetry and pastry. I visited Dawn in her home base- the Spirit Room. When asked if she has a favorite piece from years past, she says she has many. She keeps precious pieces in her home. She shows me some of the future pieces but also those that are on display from before. From the start, the reception to the show has been fantastic. They were hardly expecting the response but the first year there were 40-50 pieces submitted. Every year, new artists submit and returning artists come back. Dawn says she always thinks maybe it’s the last year but as the time rolls around, the calls come in. When is the Crow Show this year? Fortunately, the crows keep coming in.

In the Spirit of Crow, a collaboration to publish some of the pieces, is a love letter to crows. The poems and paintings are preceded by Dawn’s introduction and select tales of crows. It’s a beautiful book that tells the story of the show.

The show starts this weekend at the Spirit Room so make sure to stop in. And keep an eye out for the chatty birds sharing our winter.