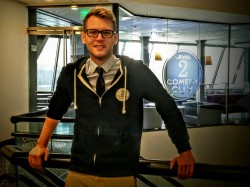 It’s kind of funny how things can come full circle, especially when it involves a comedy club. Around this same time last year I covered Adam Quesnell’s going-away show at the grand opening of the Level 2 Comedy Club at the Radisson. Now I found myself interviewing Zachary Tooker, the manager of the club, about the very first North Dakota Comedy Contest to be held there.

“I’m honestly not sure North Dakota has another comedy contest,” said Tooker, so it may be a first for the state as well as the club. That’s not to say that North Dakota doesn’t have a burgeoning comedy scene, but that until this point no one has put together a contest to bring together the state’s best talent.

“North Dakota is already a funny place,” said Tooker. It only makes sense to have a contest that raises awareness, not just for the club he manages but for the area comedy scene as a whole, especially as the club kicks off its busiest season.

He pointed out that there are twenty to thirty open-mic comedians that frequent open-mic events each week around the F-M area. Their efforts have paved the way for new people, who may have never considered trying stand-up, to venture into a new field. “You see lots of new faces who have never done comedy before, theatre students and such. It’s a grab-bag.”

Tooker also insisted that the F-M comedy community is different than in other cities. “It reflects on the community. It’s a strong community in general, really salt-of-the-earth.”

However, he pointed out, while many of the people who show up to comedy events in the area are “blue collar” types, the comedians are usually the exact opposite, despite having grown up in the same area, oftentimes very politically and socially liberal. This contrast creates an interesting tension between the comedians and the audience that rarely, however, results in bad blood. “The comedians know not to be divisive.”

If anything, this friendly butting of heads on certain issues leads to a fascinating dynamic where the comedians and audience can learn a thing or two from each other.

One thing that comedy excels at is pointing out the absurdities in our daily lives, which can create room for growth. “You get people to laugh at themselves but also to think. Because you can laugh it’s a rewarding education, an entertaining lecture,” said Tooker.

The contest itself, which is sponsored by the High Plains Reader, the Radisson, and Level 2, will take place on two Fridays, the 16th and the 23rd. On the first night of the competition, dozens of comedians will be narrowed down to five finalists. The next Friday will see the remaining five battling for comedic supremacy and a $500 grand prize.

There will also be a nationally recognized professional headliner, A. J. Finney, who has appeared on “Last Comic Standing” as well as regularly performing comedy on Sirius XM satellite radio.

After the contest, Level 2’s comedy season kicks off good and proper, with open mics every Friday and Saturday at 7 PM and 9:30 PM. Hopefully this contest is only the first of many, so that not only will this area of the country be known for North Dakota nice, but also for Fargo funny.