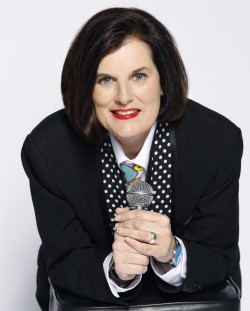 “I don’t have a tour, like, on the back of a sweatshirt,” comedian Paula Poundstone says. “I go out every weekend. This weekend I went out Friday, Saturday and Monday. Mostly it’s Friday/Saturday or Thursday through Friday and Saturday and it goes for a lifetime. It’s not just for a month. It’s an ongoing tour.”

The routine may be tedious for some but for Poundstone it’s well worth the hustle and bustle. “It’s healing, both for me and for the audience. I think you know nature gave us this really cool thing of laughter. I don’t know if any other species has it--I think maybe raccoons do, but I am not certain.”

She’s been on the scene since 1979, cutting her comic teeth on the open mic stage in Boston at the age of 19. She accredits her success to being at the right place at the right time and considers the open mic experience as “college for comics.”

“I happened to be living in Boston busing tables for a living--it’s not like I turned my back on a law degree,” she went on to say. “It was really serendipitous in terms of time and place. I’ve certainly had a lifelong drive to do so--I just had no idea where to begin if it hadn’t been for the resurgence of standup.”

As a seasoned pro she might prepare for a show by practicing a little tap dance or by quickly reviewing her notes so she won’t skip a beat in front of an audience eagerly awaiting her appearance. She’ll even apply a little bit of lipstick.

“Oh I always wear bright red--I don’t really see any other lipsticks having a point--like a lighter shade.” She went on to say, “For a while there--there was a trend of an oddly brick shade that did nothing for me. I like BRIGHT red lips. No one can see anything else even in the back of the theatre, they see bright red lips.”

High Plains Reader: When you were in school were you the class clown and what made you want to make people laugh?

Paula Poundstone: I think right out of the gate I enjoyed the sound of laughter--it’s contagious in a good way. I loved being the person to make somebody laugh. The first sentence of the last paragraph of the summary letter written by my kindergarten teacher in May of 1965--which they did in lieu of a report card. It said, “I’ve enjoyed many of Paula’s humorous comments about our activities.” I think I really valued having an adult appreciate something I did.

HPR: What do you think the key to success is as a stand up comedian?

PP: I think you kind of just have to follow your own heart. What I try to do night after night, year after year is be the most myself that I can possibly be onstage. It’s not that I’m not influenced by other people--because I am. Even who I am as a human being let alone who I am on stage. The goal is to get down to the most me I can be. There’s no topic on which I can’t do jokes because it’s all coming from this somewhat unique character that is me.

HPR: So you have a book coming out on May 9. Can you tell us a bit about that?

PP: It took seven years to write. The eighth year was for editing and the cover and all that kind of crap. Part of the reason it took so long was my book is called, “The totally unscientific study and the search for human happiness.” Each chapter is written as an experiment and each experiment was in doing something I, or other people, thought would make me happy. Some of the experiments only took a day or so, but many of them took months. In addition to that fact, I am also not a writer for a living. I don’t have designated writing time in my day--so every week I was straining to get everything done that I needed to get done in my home and for my work with my kids so I could square away a bit of time to write.

HPR: What was the most important thing that you learned while writing your book?

PP: I think that happiness in general requires some effort. Some of it is a straight biochemical thing. You feel better when you exercise and eat right and drink a lot of water. I know these things to be true, but for some odd reason it’s very hard to do these things. I don’t know why…

I think also feeling a connection to people. That connection does not come from electronics. It does not come from social networking--social networking is an advertising platform. It’s really made us more isolated and one thing I’ve become quite conscious of doing is--I talk to strangers. In a way, I talk to strangers for a living, but I talk to individuals if I’m walking down the street, sitting at the airport, at a restaurant--everywhere.

The reason I do it very purposefully is I feel as a society we are slipping into an abyss with all of our silly stupid electronics. I think people feel very lonely and disconnected. It’s a great way to push back against that and I like to spread the word about doing it because I’m telling you it makes a difference in how you feel and how other people feel.