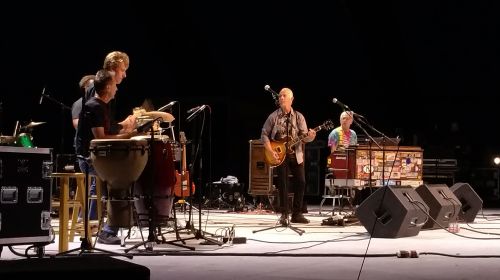 Woodstock 50 died a slow death in the months leading up to August 2019. Maybe it was doomed from the start? Maybe it was just bad luck, but what worked in 1969 doesn’t work today. I was always set on attending the Bluestem 50th Anniversary tribute show in Moorhead when I first heard about it. I first went to Bluestem back in 2011, and have been to a dozen or so great performances there since. This was written in the aftermath of the past weekend. During the full two days I was there, with the exception of a few wheaty beverages, your author was sober thank you very much! No brown acid here.

I read the lineup of acts and the sets they were covering, of course it included the music of Joan Baez, Crosby, Stills & Nash, The Grateful Dead, Jefferson Airplane, Richie Havens, Jimi Hendrix, Janis Joplin, Santana, and The Who. I was very glad they included Alvin Lee, Arlo Guthrie, Blood, Sweat & Tears, Creedence Clearwater Revival, The Paul Butterfield Blues Band, Tim Hardin, and despite her not playing the original Woodstock, they also threw in Joni Mitchell.

The first night I drove straight from my job to the show, to not to miss anything. I walked into the venue while Richie Haven’s Freedom started. Besides the bands themselves, they had various food, drink, and vendor booths that many had enjoyed over the two days. As well as several Volkswagen owners that were kind enough to drive their vintage Beetles and vans out for the display. A vintage Volkswagen fanatic myself, on the second day I spoke in-depth to the owners of my favorite car. (a 1966 two-tone Microbus) The lineup mentioned a Vietnam veteran tribute, which was a shout-out during the Crosby, Stills & Nash set while a handful of veterans stood up to applause from the audience for their service. Worth mentioning, and worth an applause.

The weather the first night was spectacular, the second day we got a little rain towards the end of the day, but it wouldn’t be a proper Woodstock tribute without some right? I had no problem being a little damp while waiting for one of the final acts to set up their gear.

It’s not a question of the performers being good, I know they all can play, and play well. It’s also not if they can pull off the sets/songs, its up to the listener, and I can only speak for myself and my tastes. As far as a concert, it went, for the most part, without a hitch. The second night they swapped some of the final acts for timeliness. Nothing was behind schedule, I can confirm that as a fact.

The friends I saw at the shows, the ones who played their sets and stuck around to watch the rest of the acts really showed that everyone was on board to see everyone perform.

(Not everyone stuck around, especially after the rain on Saturday) A music festival should be about good music, and good people. No one climbed the towers, no one got electrocuted, no one died, there was no mud, (that I could see) and the crowd of mostly baby boomers, and a handful of the younger generations were all there for the same reasons. The promoters, staff, security, sound people, and stagehands made everything happen. Security even told me over the two days they didn’t have to kick anyone out or break up any fights. The atmosphere, the overall experience, and the crowd response was worth it for me.

Highlights for me personally:

Being the lunatic in the breton striped shirt leaping in the air on the security fence to the end of the Santana set on the first night. (I love the first Santana album, and that set was incredible)

Compliments from concert-goers on my Fillmore East t-shirt I wore the second day (my little tribute to the late/great Bill Graham) who attended the original 1969 festival.

The fashion. Tie-dye as far as the eye could see. I’ve got striped pants, paisley shirts, headbands, and a fringe jacket in my closet, but I left them all at home. They weren’t needed! Besides, Levi’s, sneakers, and boots never go out of style.