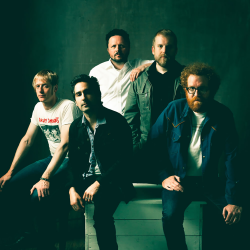 Rock and Roll was made for you. Band in Fargo on Saturday

There’s nothing more rock and roll than singing about rock and roll. For as long as the genre has existed, its torch-bearers have spouted its mystical, transformative virtues. A seeming act of piety, it’s been ambiguously twisted into averb in thrashing sermons by the likes of Led Zeppelin, AC/DC, Bob Seger and the Velvet Underground. While those bands’ definitions fall far from total encapsulation, country-rockers Blitzen Trapper dare to offer up a sort of rock and roll primer with their eighth LP, “All Across This Land.” They play Fargo this Saturdya at the Aquarium a day after their new album comes out.

A return to form after the unexpected hip-hop dabbling of their previous “VII” album, Blitzen Trapper’s latest is the archetypal rock album in every way, and in indie music’s current riff recession, it’s a needed kick in the ass. With the same power chord pounce of the group’s previous records “American Goldwing” and “Furr,” “All Across This Land” burns hot like a finely tuned tube amp.

Here, the band’s sacrificial offering at the altar of Rock, “Rock and Roll (Was Made for You),” is surely due, considering their obvious debt to their forebears. These ten songs, all hovering close to that three-minute-thirty-three-second sweet spot, encompass large swaths of classic rock radio, invoking the canyon breeze of the Eagles and Jackson Browne, the blue-collar heroics of Springsteen and Mellencamp, and the dark Americana of Neil Young, whose 1972 album “Harvest” they incidentally covered live in its entirety for their contribution to this year’s Record Store Day.

Frontman and primary songwriter Eric Earley said he wrote the songs quickly, opting to follow his instinctual songwriting instead of ruminating on and tweaking them as he had on previous albums. His avoidance of creative hand-wringing has surely paid off; each song hits its mark, with every chorus demanding a sing-along and every bridge tugging tension for the next one. If it sounds like the band is settling in, it’s only because they’ve got a formula worth settling into.

Though Blitzen Trapper’s music has always been marked by punchy riff-rocking and unabashed guitar wailing, it’s Earley’s lyrics, delivered in his calling-card twang, that have endeared so many listeners to the quartet’s AM radio-reminiscent songs. While the immediate darkness of fan favorites like “Black Water Killer” is absent here, within “All Across This Land” resides an entire town of burnt-out, forlorn could’ve-beens and never-weres.

Earley’s character sketches, vaguely rendered with swirls of high school booster club spirit and summer nights spent in the backseats of muscle cars, ache with a deep current of rural desperation. Delivered over nothing but a ghostly steel guitar moan, lines like those in “Cadillac Road” (“Got a teenage boy, he doesn’t know my name / Sometimes I go and watch him at his football games / But one of these days I’m gonna tell him the truth / Who his old man is and who I was in my youth”) dim those Friday night lights.

As surely as small towns are glued together by earnest, knowing smiles and those charming, two-fingered steering-wheel waves one truck cab to another, “All Across This Land” is united by its unflagging, rocking spirit, no matter how dark its undercurrents may be. With a simultaneous rural grit and spit-shined polish, this rock and roll catechism may very well be the band’s finest effort yet. It’s just a shame that the world’s dusty Camaros will never know the album on the eight-track format it deserves.