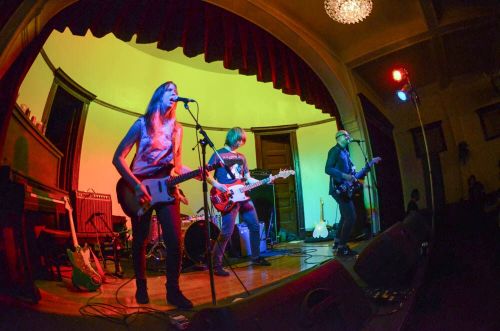 When asked to describe the sound of Green Blue, Minneapolis based musician Annie Sparrows formerly of the Soviettes and Awesome Snakes laughed and said, “Our friend came up to me after a show and he said ‘Do you like Belle and Sebastian?’ and I was like--I don’t really listen to them but I know who they are so ...maybe? Then he goes, ‘I love Belle and Sebastian and you guys are the Belle and Sebastian of psych rock.’”

The Belle and Sebastian reference was in describing the vocal harmonies shared between Jim Blaha formerly of the Blind Shake and herself. On a more serious note, she described Green Blue as post punk or melodic college rock. Though they just played their first gig in April at the Moon Palace in Minneapolis each member a veteran of the Minneapolis music scene.

In fact, Green Blue can and has been described as a Minneapolis “supergroup” made up of Jim Blaha of Blind Shake, Hideo Takahashi of the Birthday Suits, and Daniel J Henry also of the Soviettes and Awesome Snakes.

“Danny and I have played for about 20 years, even before the Soviettes I played with him in a garage band. But we’ve played shows alongside Hideo and Jim for years so it’s really fun to be on stage together and it’s working really well.” Sparrows said.

When asked how the collaboration between the musicians started, Sparrows said: "Jim had started writing all these songs that were not really Blind Shake-y. I wanted to buy a piece of art from him so he swung by my house to drop it off and he told me that he’d been writing all these songs…” and from there it grew. She and Blaha first met when their bands played a gig in Park Rapids in 2002.

Though Sparrows has spent the last 17 years in Minneapolis, she’s originally from Fargo and grew up playing in bands. When asked if she grew up in a musical household she mentioned that her father plays in a Fargo band called The Deadbeats. When asked if they ever jammed she laughed and said, “No, we break out into song and we definitely share equipment, I bring a lot of guitars and amps back and forth. My husband Jesse is in a band called The Slow Death. He and my dad also talk a lot about gear. We’re all musical together I guess.”

Blue Green does has their first single available on their bandcamp page but Sparrows assures us, “We’re almost ready to crack our first record.” Green Blue will be playing Saturday night as part of Harold’s Fest.

Harold’s Fest: Velkommen to the Jungle