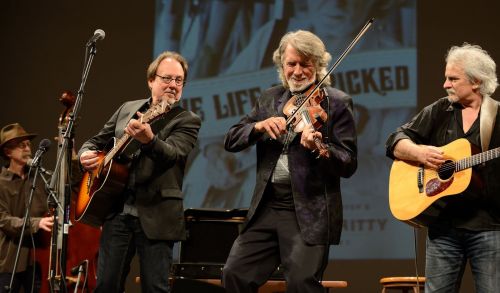 John McEuen & The String Wizards will perform at the Historic Holmes Theatre in Detroit Lakes this Saturday in what will be a multimedia showcase of McEuen’s legendary career in the music industry.

The show will be a performance of “Will the Circle be Unbroken” as well as original songs by McEuen. “Will the Circle be Unbroken” was originally released in 1972 by The Nitty Gritty Dirt Band. The album was a collaboration between The Nitty Gritty Dirt Band and major artists in the country and bluegrass industry including Roy Acuff, Maybelle Cartestory comes to lifer, Doc Watson, and Earl Scruggs and Randy Scruggs to name a few.

Fans will be taken back in time and watch video and see pictures taken during the time of the original run of “Will the Circle be Unbroken,” including footage of the leg of the tour in Russia where The Nitty Gritty Dirt Band played to 28 sold-out audiences. While the footage and pictures are behind the band, they will be playing the music that corresponds.

McEuen’s career has spanned over 50 years and includes both solo and collaborative efforts in country and bluegrass. He has performed with Johnny Cash, Willie Nelson, Dizzie Gillespie, The Doors, John Denver, and even Steve Martin. He is a founding member of the Nitty Gritty Dirt Band and last performed with the band in Fargo two years ago.

McEuen first picked up a banjo at the age of 17 and has been giving his all to audiences all around the world ever since, including a benefit concert for the Bemidji Fire Department in Bemidji on September 11, 2002 – a day McEuen said no one else was performing. He has been involved in recording over 50 albums with various artists.

As a part of collaborations and solo, McEuen has won many awards and accolades, including Grammy Awards and an induction into the Grammy Hall of Fame for “Mr. Bojangles” with The Nitty Gritty Dirt Band. In 2010, he was presented with the Folk Alliance’s Best of the West Performer Award. He is also a member of the American Banjo Museum Hall of Fame.

McEuen hosts a program on Sirius XM and has recently released a book called “The Life I’ve Picked.”

Recently, McEuen has taken part in a PBS documentary series called Ken Burns: Country Music. “Will the Circle be Unbroken" was featured in episode six. Since then, the album has seen a resurgence and went to number 1 on Amazon Music.

John McEuen & The String Wizards’ performance promises to be a unique experience that will appeal to fans of McEuen and The Nitty Gritty Dirt Band, but also to the music historian. The footage that will be shown will take those in attendance back in time 50 years and capture the mood and experience felt by McEuen, the band, and others involved in the creation of those albums and concerts.