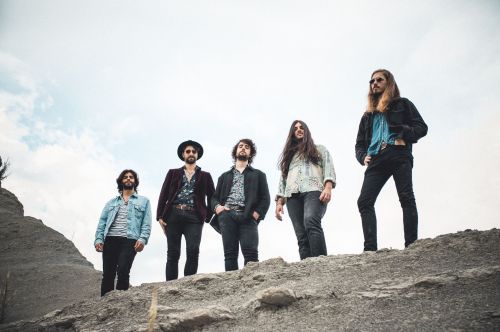 Dropping tomorrow via Listenable Records, On The Rise, is a bluesy rock collection by the Spanish quintet Imperial Rise. With praises across Europe, we would like to add in a bit of positivity from America as well.

The album has a fun 70’s throwback vibe mixed with influences of the band’s Spanish roots, that makes you want to move! This band’s sound has always been “classic” inspired, but they changed it up with On The Rise by adding in more blues and melodic tones, vice the louder, in your face rock and roll of their past work. There is an authentic element to their music, simply through the way it is recorded. Though heavily guided by the guitar and vocals, there is a depth to each song. There is a perfect fade in and out of the instruments and backing vocals that create an organic sort atmosphere, as if you are right there in the room moving about with the band all around you.

The opening track “You Ain’t Seen Nothing Yet” is high energy and soul packed, followed by “Dance” which will incite you to do just that. Songs like “The Call”, “Glory Train” and “Heat Wave” all continued that upbeat, feel good tempo that is the driving force of On The Rise. The real standout track for me personally is “Lullaby in Blue”. When you think of old school psychedelic rock you think of the build up. The slow ‘lullaby’ guitar riff to start it off and the loud power packed middle, guided by harmonies and instrumentals that “take you there”. This song replicated those feelings excellently and showcased the band’s ability to capture the essence of the era.

With a second album this good, I think Imperial Jade might just be “on the rise." I would suggest checkin out the effort and for those who grab a copy, there are two bonus tracks for even more melodic pleasure.

We had the chance to chat with guitarist, Hugo Nubiola.

High Plains Reader: For our readers who are new to Imperial Jade, tell us a little bit about the band’s background

Hugo Nubiola: Imperial Jade is a band of friends who love rock and roll. The band was originally founded in 2012 under the name of Blackway by Alex (guitar), Fran (drums) and Arnau (vocals) who later found Ricard for the bass. Two years later in 2014 they asked me (Hugo) to join them as a second guitarist and I couldn't be happier as we were already good friends and I was a fan. We recorded an EP that year and by the time we ere going to record our first full length album we weren't very happy with our name so we decided to change it to Imperial Jade, as we thought it sounded good and it was a good time to do so. So we released our first record in 2015 and that led us to play all around the country playing in some festivals and even being the support act for some of the greatest bands such as Rival Sons and Europe. The project kept growing and we recorded our second album in 2018, which we are re-releasing now under the newly signed record label Listenable Records.

HPR: Your music has a classic rock vibe, what inspired you to take this route? Who are some of your biggest influences?

HN: I guess just listening to the music from the 60’s and 70’s since we were very young is what inspired us to take this path in our music career. I think any artist from that era that has gotten into our ears has had some kind of influence on us, but to name a few I’d say the big ones like the Beatles, Zeppelin, Floyd or Purple. Also older artists of other genres such as blues, jazz, soul have had a great influence on us, and in the last few years we’ve been listening to a bunch of great contemporary musicians which I’d like to think are leaving a footprint on us as well.

HPR: "On The Rise” is your sophomore album, how do you feel like you have progressed between your first and second release?

HN: Well if we compare our first album "Please Welcome Imperial Jade" with "On The Rise" I think it is plain to see that a few things have changed in what comes to our way of composing, and more importantly, producing our songs. The sound of the first album is maybe more homogenic, with the same instruments playing in every song, which is great, but for this record we felt like experimenting a little bit more with different sounds, guitar pedals, instruments, we also have been working the harmonies of the backing vocals and stuff. Overall I think it is a more complete record, being both great albums with good songs anyways.

It is indeed something that came naturally during the time we spent between one album and the other. We are constantly discovering new music that inspires us to make things a bit differently when we start thinking how we are going to produce one of our songs.

HPR: Your work usually has more of an 80’s rock sound, but this collection is definitely 70’s bluesy-rock. What exactly made you want to incorporate more soul into your music?

HN: I think the blues and soul have always been there for us, it is just maybe that we still hadn’t found the right way to connect it to our own music. I believe we’ve got many different facets that will eventually come to the surface as we naturally evolve as musicians. We are willing to experiment with different genres, sounds, instruments and so on.

HPR: What was Your favorite song to record and why?

HN: One of our favorites, and I think we can all agree with that, was “Lullaby in Blue.” I personally just recorded a couple of guitars in the heavier parts, as the keyboards to that tune where played by a friend of Alex. But I remember being already very satisfied with the songwriting process of the song before we got to the studio, and the process of recording was even better as we could see that a great song was being made. We were all very excited the day our friend Xiluva Tomas recorded those backing vocals. It might sound stupid but it was like we couldn’t believe our own song was turning out so good.

HPR: Is this more of the direction you hope to go with future albums, or do you see yourselves continuing to experiment?

HN: I personally don’t see myself playing the same thing over the years. It’s not like I know where I’d like to go from here (musically) but I am indeed willing to experiment, as I said before, with different things as long as it feels good. I don’t know, I just would not close ourselves to some strict kind of music because that can sometimes keep you from releasing, or even composing, a good song just because it’s not “hard rock”.

HPR: Are there any upcoming plans to tour?

HN:We are working on it! It is still too soon to say a thing but our plan is to start playing abroad as soon as possible.

HPR: Do you think we will be seeing any Imperial Jade shows in America any time in the near future?

HN: I really hope so, it would be so awesome for us, and we are more than ready to take anything as it comes.