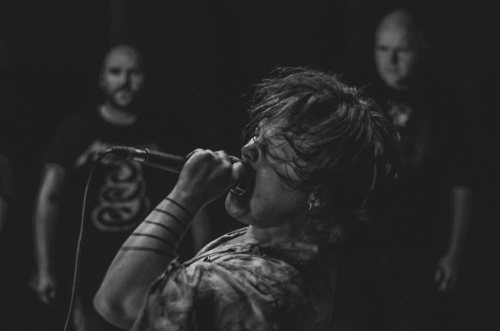 August 24th at the Aquarium, Radio Free Fargo will be throwing the first of two four year-anniversary parties.

This event will feature five of Fargo's premier metal bands and two great Midwestern acts with Sunless and Tongue Party. Sunless is a monstrous technical death metal beast from Minneapolis making their second appearance in the FM area. Their most recent album Urraca is out on Willowtip Records, and is a must listen if you're into bands like Gorguts, Ulcerate or Gorgatron. They've been destroying stages across the Midwest with bands like Cognizant, Baring Teeth, and Inter Arma.

Tongue Party play, an infectious mix of noiserock, thrash and grimey hardcore, also hailing from the Twin Cities, playing for the first time in Fargo, are coming off the road heading home from a tour with the mighty Multicult. Filled with youthful energy and songwriting chops to rival the greats in the noise rock genre. These dudes are not to be missed- - opening up are locals Sangha and Maul, as well as Phobophilic (Putrid Death Metal), Alien Conspiracy (alien themed death metal legends) and Thrallfrost (black Metal from the Frozen Tundras) come out and support local music and Radio. All proceeds go to keeping our great station on the air. Below is an interview with Members of Sangha and Maul.

HPR: Sangha sounds very different than most any other bands in town – describe that sound and what you’re about

Gabe: Our sound is experimental metal. I guess that is the blanket term for what we are.

Gabe: It’s like if Prog metal was a thing back in the 70s and we all did way too many drugs. *All laugh* Lyrically it’s about facing and accepting change. Knowing that it is inevitable and that it’ll happen whether you like it or not, and also knowing that there are some things that will not change. Things that are rooted in your nature as a person –these songs are about growing and moving forward.

HPR: The Sangha live experience is intense and seems like it’s a release for you – describe that process

Gabe: Yeah we just get up there and f*cking do it – we get into the headspace of like, we are here, we are all doing this.

Mitch: It’s Meditative, we are all kinda in there doing it together.

Zack: We were all experiencing a lot of emotions when we wrote these songs so when we play live we just try to get people to feel that same thing

Gabe: Yeah, the big thing we say is that we hope we can get you to feel something. It’s the first thing I say before we go on stage

HPR: A lot of people know Sangha due to the Sangha house shows which are now no more – give us some good memories of Sangha house

Mitch: A lot of parties – a lot of shows.

Gabe: It was cool seeing so many different people come thru and create a community of friends, a place where they knew they could come and blow off some steam and get some egress and some catharsis.

HPR: My favorite memory was the green altar show. There was just like way too many people down there and just way too many amps *everyone laughing* it was madness and on top of that there was a madman drenched in green light waving around a staff and screaming in my face!

Gabe: That show was crazy but I’d have to say my favorite memory, I will say was the final show when we wrapped up and went upstairs and put my hands on the wall to brace myself and it was just wet – the walls were covered in sweat, not an inch of the house that wasn’t wet...

HPR: Two years ago you played your first show in the Red Raven with Sunless and now here we are full circle and you’re playing with them again Saturday Aug 24th – How have the first two years been?

Garrett: Man we didn’t know what we were doing at the beginning of Maul. I just knew I had an urge to play heavy music again so I got together with Lamb and ultimately met up with Robby here.

Robby: (Laughs) I didn’t even know how to play drums when we started – I had a kit I borrowed and practiced on in the basement – but when we all jammed together the chemistry was there and it’s all just felt pretty natural since that.

Garrett: We try to stay well oiled – no one hates each other.

Robby: Really for me the biggest difference since we started is just my comfort in my ability to play and my comfort with writing itself - its not about whether people are going to think it sounds good or whatever - it’s just being sure of ourselves as a group.

HPR: Fargo metal scene has really blown up in the last two years since you’ve started and I feel like your band has had a hand in that – tell us about what it’s like being part of this scene.

Garrett: It’s been so badass! I didn’t know if it was just popping because I wasn’t around as much before but there are metal shows weekly that are showcasing all kinds of quality heavy stuff of all different kinds – Fargo is really thriving right now, especially the metal!

Robby: It’s really just like you come to the show and bring all your friends and we all hang out and have fun. People can talk to people they don’t know and it all feels easy.

HPR: You guys have been touring around the Midwest a little bit so tell us a cool road story -

Garrett: Well, we were going on a run in March through Ohio and played this show in a DIY spot in Toledo – Holland Haus– we played with Wits End, Hanging Fortress, Self Loathing and Mutilatred – it was in this garage and it was just packed and was a downpour outside. People were just drunk and it was crazy – laughs – It was just Insane.

Robby: That house itself had been doing DIY shows since like the 80s – the previous owner actually sold it to another owner that would make sure that they kept doing shows in the house

HPR: I also saw you guys somehow got on travel channel eating burgers – how’d that happen?

Garrett: We were doing a couple shows in Iowa and decided to go to Zombie burger – we had heard a lot about it so when we showed up there was a TV crew making people sign waivers in case they were in the background.

HPR: Well how was the food? It all looked so extravagant and decadent in the video?

[Editor’s note: Martin Beckmann is the man, myth and legend behind Locals on the 8 on KRFF 95.9]

Sunless And Tongue Party at The Aquarium