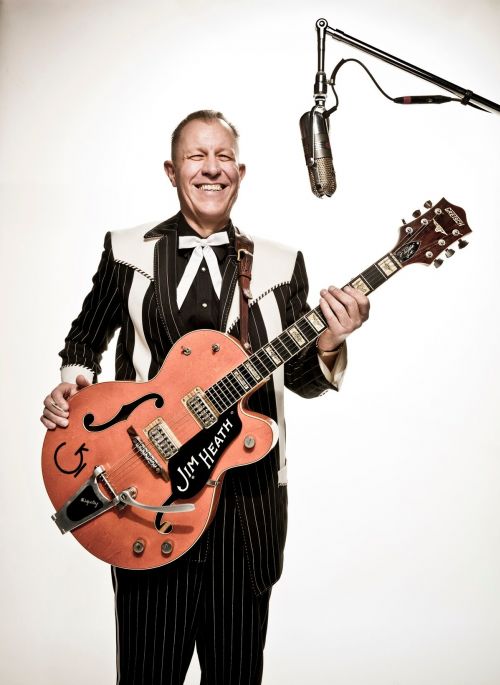 When I had the chance to catch up with the Reverend Horton Heat aka Jim Heath, I was greeted with a friendly smooth slow Texas drawl. He’s like an encyclopedia of early rock n’roll knowledge, theories and killer stories. His band has opened for everyone from shock rocker Marilyn Manson to the ORIGINAL shock rocker Jerry Lee Lewis. In fact the pianist currently on tour with Heath even plays Jerry Lee Lewis as a tribute act. After nearly 30 years in the game, Heath is also one of the pioneers of the psychobilly genre. We started our conversation talking about the original rock n’ rollers and the preservation of that culture, the difference between rockabilly and psychobilly genres, and the Rev’s latest album.

Reverend Horton Heat: Well, yeah, my art is rock n’ roll. I think rock n’ roll never really had its day in the sun. Everybody talks about how rock n’ roll changed the world and rock n’ roll will never die… well, you know it really died kind of quick… It started about 1953 and by about 1965, when The Beatles started going psychedelic it was pretty much over. I think it’s going to come back someday period. I think it’s going to storm back and be so big some day it’s going to be shocking, because it’s high energy music. Young people --the main people who want to go out and see new music. A lot of that new music isn’t nearly as high energy as rock n’ roll. All this rap stuff is really slow beats. Rock n’ roll is fast, it’s crazy zany high energy and frantic, there’s not a lot of that element in pop music anymore like there was in the 50s, I’m all about trying to bring rock n’ roll back. That’s my calling in life and I’m trying to do it.

HPR: You’re also considered a pioneer in the Psychobilly movement. Could you tell our readers the difference between psychobilly and rockabilly?

RHH: Well, I consider myself to be a rockabilly but I wrote a song called “Psychobilly Freakout” that kind of helped bring the name “psychobilly” into the consciousness of the alternative movement--we do play a lot of those festivals with psychobilly bands and stuff but psychobilly--a lot of those bands are like punk rock bands with a slap bass and Gretsch guitars, where rockabilly is gonna be a little bit cleaner of a guitar sound, it will be more of an old 50s sounding rock n roll as opposed to psychobilly. That kind of explains it a little bit, but every band is different with their ways of doing things. All of the great psychobilly bands have something about them that’s identifiable and cool, same thing about all the great rockabilly bands.

HPR: You’ve shared the bill with quite the variety of bands, what do you think makes “The Rev” so versatile?

RHH: A couple of reasons, one is that our music is so high energy--we’re a high energy band and we’re able to entertain a crowd. The other reason is that we have songs that are kinda country, some are straight rockabilly some are a little more psychedelic and some are a little blues sounding. So even from the very beginning of this band I would adjust and change our setlist we could play a blues club one night, we could play a punk rock show the next night and go open up for someone at a country show the third night and so on and so forth. We’re playing our own music but adjusting our setlist.

HPR: I love that--that definitely shows the skill and versatility of you and your bands’ musicianship.

RHH: It took a lot of work to get to that point but frankly we were motivated by fear, you try to do the best that you can. It’s a lot of pressure trying to get a gig in a club and you don’t know if the people in the club will like you or not… so we were trying our best to forge away with our own music, so (laughs) we had to be versatile otherwise we wouldn’t have got here!

HPR: Do you think that there’s a Texas sound?

RHH: I think there’s a lot of that in Austin, the blues has been a big thing in Texas for gosh… almost a hundred years now I guess… A lot of the great country artists were from Texas, Texas was the great breeding ground for Western Swing which was basically jazz with a western feel. We’ve got our own sounds going on here. In Texas when I was growing up that music was still around and still going strong. You know, Chuck Berry’s big song “Maybelline” is a take off a Western Swing song called Ida Red.

RHH: Uh-huh, you know, Rock n’ roll is a real melding of black and white cultures. You have Chuck Berry doing Western Swing songs and then you have Elvis Presley doing rhythm and blues songs. It’s a real important connection that was made between the races and various people from all regions and economic backgrounds. It’s a real important thing.

HPR: Your latest album is noted for being your most positive. Where did that positivity come from?

RHH: I don’t know, it might be because I am a happy person after all these years thinking I was a terrible pessimist? (laughs) I try to look on the bright side of things and I wasn’t always that way. Reverend Horton Heat was so dark for a while and I think I’ve finally gotten over that. This last album is the most positive that I’ve ever done I think if I started out with this album with that intent--it wouldn’t have been positive at all, you know... these songs on these albums just seem to fall out of space and hit me on the head (laughs).