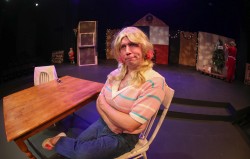 Theater is far from wrapping up for the year in Fargo-Moorhead, as the folks of Bare Stage Theatre present their Christmas sequel to “Greater Tuna” the next two weekends.

“A Tuna Christmas” picks up with the two-man cast of David Lassig and Mark Seeba, who juggle 22 characters. It’s a mix of women, men, kids and even a cat, cooking up an outing of theatrical tomfoolery for area audiences. David even portrays three siblings in the same scene, changing costumes and moving quickly as “A Tuna Christmas” moves along.

“The props are all basically mimicked. The costumes are pretty heavy-duty, but it’s very quick pieces, so it’s a lot of layering,” director Shanara Lassig said.

The show’s set is minimal as well, with a backdrop for costume changes, rotating, turn-table Christmas trees for scene changes and then just a table and chairs for set pieces.

“They mimic everything,” Shanara said of the two-man cast. “They’re acting everything out, so there’s not a lot of props or set there that they’re using to help the audience see. They have to use their imagination, for sure.” 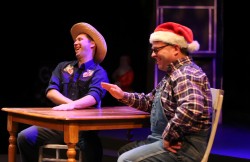 For anyone who saw Bare Stage’s “Greater Tuna” two years ago, “A Tuna Christmas” is right in the same vein of entertainment. Those familiar with the Lassigs’ and Seeba’s onstage shenanigans should not be disappointed with most anything from the folks behind farces like “Fowl Play” and last year’s “Hound of the Baskervilles.”

“A Tuna Christmas” is ripe for the time of year, following its characters’ families as they try to find the phantom pranking their town. As a Christmastime comedy, Bare Stage Theatre’s latest offering is a real gift for audiences, Shanara believes, and it is another great production under the Bare Stage’s belt.

“It’s a little bit of everything -- mostly it’s a comedy, of course -- but I think people will just be impressed like they were with ‘Greater Tuna,’ with the costume changes and the abilities of Mark and David to portray the different characters,” she said. “It’s wonderful to be able to work with them and show people how wonderful they are.”