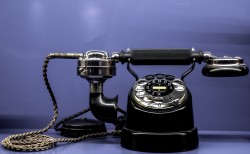 The F-M Community Theatre summarized the story: “Tony Wendice has married his wife, Margot, for her money and now plans to murder her for the same reason. He arranges the perfect murder. He blackmails a scoundrel he used to know to strangle her for a fee of one hundred thousand pounds, and arranges a brilliant alibi for himself.“

Unfortunately, the murderer gets murdered and the victim survives. This plot-twisting play was written by Frederick Knott and was premiered on stage in London’s West End in 1952. Knott is known as the writer who would also write the screenplay for Alfred Hitchcock’s famous 1954 film adaption of the work, starring Grace Kelly.

“The show is built as a stage thriller, so everything that the director, designers, and cast have crafted is mindful of setting the proper tone and building suspense as the plot unfolds. It takes a certain kind of director to properly layer in these elements and get everyone on the same page in executing moments big and small with precision.

“James DeBrito has done a wonderful job assembling and guiding a top-notch cast to bring individual character motivations to the front of their performances. Every mystery has a motive and methodology as an undercurrent running constantly beneath it, and that pulse of electricity driving the action is true of this production,” commented Adam Pankow, The Artistic Director of Dial “M” for Murder.

“Audiences may be familiar with the Alfred Hitchcock movie from 1954, but the experience will be quite different seeing this classic show play out on our stage. We hope that audiences will appreciate the thoughtfulness that went into all the elements necessary for a truly masterful murder mystery.”

“I tend to believe thrillers are the theatergoer’s guilty pleasure. It promises to get your adrenaline flowing as the action inexorably leads to the unraveling of the perfect crime. Though it’s indeed a guilty pleasure, Dial ‘M’ for Murder is not just empty calories. That’s because the playwright, Frederick Knott, combined a facility for crafting suspense (the placement of a key, the timing of a phone call, the loss of a silk stocking) with profound character study.

“When you think of an Agatha Christie mystery, you probably think of the details of the murder or how the murderer gets caught (“I’ve gathered you all here because… one of you is the murderer!”) But when you think of Dial ‘M’, you think of the characters: Tony, Max, Lesgate, Inspector Hubbard, and of course, the radiant Margot. That’s why Alfred Hitchcock, the undisputed master of the psychological thriller, largely left the script intact when he chose to adapt Knott’s play for the silver screen.

“The play, written in 1948 but not produced until 1952, is probably best known in its 1954 screen incarnation, the first film to be shot in color by director Alfred Hitchcock, the master of suspense himself. The play is not a whodunit in the Agatha Christie mold, although there are similarly spiraling twists of logic and deduction. This is more along the lines of Columbo in that we know who did it (or wants to) and why; the question is whether he’s going to get away with it. During rehearsal, we had several invigorating discussions revolving around the themes of infidelity, deceit, and privacy boundaries.

“I am grateful to have had this opportunity to work with this imaginative, passionate, and professional cast. I would like to also express my thanks to the FMCT administration and creative team. I am dedicating my directorial effort to my 91-year-old Italian father Frankie DeBrito.”

FMCT presents the thriller play, ‘Dial M for Murder,’ on October 6 – 7, 13 – 14 at 7:30 pm, and October 8, 15 at 2:00 pm at the Stage at Island Park, 333 4th St S, Fargo. FMCT is a nonprofit organization that has been producing live theatre for 70 years. FMCT has been a huge inspiration of discussion and participation from community members, by producing and performing quality pieces of theatre.