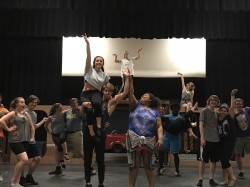 Under the summer sun, something’s begun, taking over those summer nights. The 1978 movie and musical hit Grease is taking stage as part of the Summer Arts Intensive in West Fargo.

“Although on stage together, toe to toe together, our college students, who have been going through their training programs, get to be the one to mentor and set the standard for the high schoolers,” Pankow said. “It’s a wonderful, reciprocal relationship. Everyone’s learning something from everybody, everybody has something to experience from everyone else.”

In total, 35 students are performing in Grease. All, Pankow stated, are from different backgrounds, schools and training programs. Rehearsals started July 5, starting what Pankow calls the “intensive” part of the program. Rehearsals are four days a week, for seven hours.

“At this part of the process, it’s like ‘Oh, wow, we’ve only rehearsed this thing for five days but the amount of work we’ve done is awe-inspiring,’” he said. “It’s the moment to go, okay, this is work. We have cast and crew that’s working hard and that’s believing in what we do.”

Pankow said Grease was chosen for its ability to support a small cast, that allows for individual learning.

“With a smaller performance, there’s an emphasis on the ensemble,” Pankow explained. “Grease is such a great show for that. We can showcase a ton of people.” Grease isn’t unfamiliar to the stage, having its stage adaptation interpreted by multiple theater companies. But Pankow assures that this performance will hold its own unique spin.

“I haven’t seen the same show twice. Every company, every group of individuals puts their own twist into it. They characterize it in a different way,” Pankow explained. “Grease is a pleaser. It’s a cultural phenomenon. Everyone loves the songs, the dances. Sometimes, theatre for the sake of entertainment is a good reason for theatre to exist.”