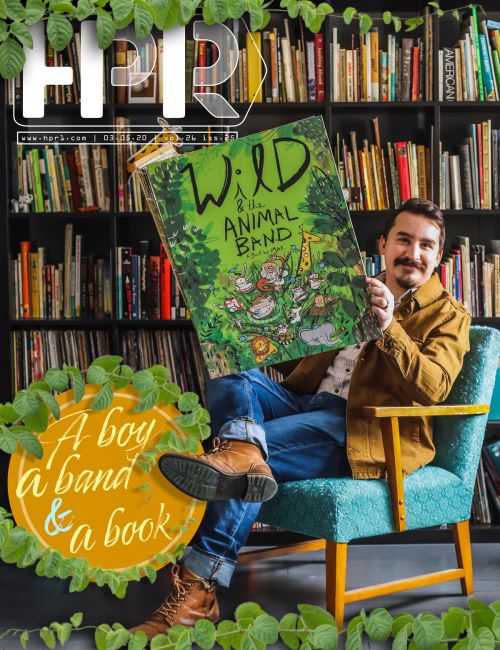 Max Patzner, guitarist, artist and lead vocalist of the Minot-based indie folk band Wild Hands is at it again but this time he has a few new tricks up his sleeve. He’s the brains and talent behind The Little Why Not? Publishing house. Along with art and music he’s created a homegrown publishing house with the intent to not only produce children’s books but to inspire, educate and light the creative fire within both the young and young at heart.

HPR had the opportunity to chat with Max about The Little Why Not? Publishing house, its first release, “Wild & The Animal Band” and its accompanying five song CD with music by Wild Hands.

High Plains Reader: Can you tell us a little bit about Little Why Not? Is it a publishing house that hosts events?
Max Patzner: The Little Why Not? Publishing House has a ton of moving parts, but essentially it’s a community educational / inspirational outreach program to get kids excited about reading, the arts, music and everything creative in North Dakota.

Through workshop events and live reading and musical performances we hope to show kids… and really everyone, that North Dakota has a crazy amount of talented artists and dreamers and that it is possible to venture down the creative path in North Dakota.

I’ve been playing music and making art for over 10 years now. Over that time a lot of my fans and supporters started having kids and bringing the fam to our shows. I think what really sparked it was when their kids started jumping around and loving the music too and you could see them getting inspired. They would come up to me after the show and say “I WANT TO BE A MUSICIAN TOO!” or they would see my artwork on the albums and say “I WANT TO BE AN ARTIST!!” or “I WANT TO DRAW CUTE CREATURES AS A JOB!!!”

It’s a little corny, but it really showed me the impact art and music can have on people. That was my personal experience too getting into art and music. I went to a show when I was 15 and saw a musician doing their thing and it stuck with me. It was something I didn’t even know was possible for a North Dakota kid.

HPR: Can you tell us a bit about the workshops Little Why Not hosts?
MP: We are kicking things off with a build your own picture book workshop. We teach how to write a story. students draw the pictures and then we take the stories and publish them into professionally printed, hardcover books - hopefully to live on the family bookshelf forever.

I’ve also been taking a giant three foot copy of the WILD book and playing tunes for students in classrooms. They go crazy for it and teachers have been saying it’s been a huge success with inspiring kids. We performed a few of these thanks to a Bush grant. Next goal is to do some fundraising and take this to rural schools that don’t really have access to programs like this.

HPR: I love the concept of the coloring wall that you set up at Host fest-can you elaborate more on your coloring activities?
MP: That was a super fun project and a great example of dreaming and scheming. Little Why Not? Acts as a creative studio too and we are going out of our way to create projects for events and businesses that also promote the arts and that idea of - “no matter how crazy it might sound… you gotta do it. Why Not?” So far we’ve only done one coloring wall and it was for the Host Fest. It was a big hit. Not only was our final product really cool, but the actual process of making it with 3,000 fellow festival goers was a pretty amazing experience. Giant crayons were involved too… way too much fun. I hope this will catch on around to other festivals events.

HPR: Is Little Why Not a collaborative effort between Minot artists or is it primarily your own work?
MP: Right now it’s mostly the MAX show making art and music. I have a huge support system though. Couldn’t do any of this stuff without my family and the creative community backing me up.

Over the years I’ve met a ton of people who have had ideas for kids books and other projects, but they just didn’t have the resources to get them going. Making a book is an uphill battle and it’s easy to just give up. So the dream is to start collaborating on projects with people.

Our first collaborative project is actually in the works right now… coming out next year on Earth Day. Someone approached me with just a great title and a little premise and after some collaboration and a few drinks and meetings we had a really awesome book project going. It’s called “Fart Fart Go Kart” - it’s about the environment, renewable energy AND the idea that sometimes an idea can be crazy - so crazy it might just work.

HPR: Do you plan on publishing more books from regional artists or is it primarily the work of Maz Patzner?
MP: I’m just getting started and working on developing a brand. For the first year it will be mostly MAX art. Definitely want to do more collaborative projects though. I’m definitely looking for more seed projects over already developed projects right now.

The dream for the future is to create a well of artists and writers and start collaborating together on book projects and community projects all over the state. I’m meeting people and getting the ball rolling as we speak!

HPR: What was the most difficult part of writing a children's book?
MP: This book is fun. I wanted to write a fun book. The world can be a crazy place sometimes and I believe we need to escape it however we can… go wild and make a bunch of noise. I think the hardest part is writing a story that is a great escape, but also meaningful. A book that takes little readers on this adventure while simultaneously teaching some life lessons along the way.

HPR: What came first, the book or the album?MP: I knew I wanted to combine all the things I love into one project. Art, Music… cute animals - everything in one vehicle. Ultimately, I wrote the book with the idea that it would have a soundtrack.

The process was very cool and unlike anything I’ve done before. I wrote the story and then wrote songs off of the themes and certain lines from the book. There’s a lot of howling at the moon in the book… so of course you have to write a song about howling at the moon. I tried to make the songs for everyone of all ages though. You might not know it was a kids song if you just heard it playing on the radio. The songs are fun and have little gems of wisdom I would have loved to tell myself when I was growing up.

To preorder “Wild & The Animal Band” and to keep up to date on The Little Why Not? Publishing house visit https://www.littlewhynot.org/ or check out @little_why_not_house on instagram