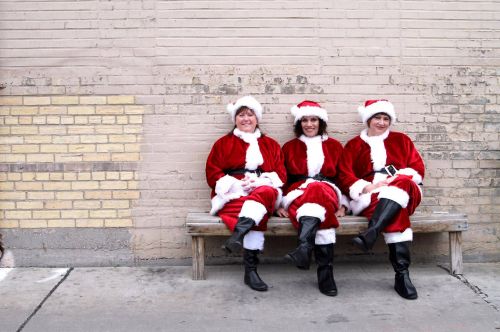 Fargo SantaCon for Charity is a holiday-themed pub crawl that raises money and collects needed items for the Gladys Ray Shelter and Veterans Drop-In Center.

For the eighth year, a small group of friends organize this event, in the spirit of fun and giving. Pub crawls may be plentiful in Fargo, but SantaCon’s purpose and charitable focus make it stand out.

There is no admission fee; you are not being charged for some mug or trinket; you are just asked to bring something to donate to the shelter. It is organized locally and is not for profit.

On Saturday, December 9, the event kicks off at 1 p.m. at the downtown Fargo VFW. At 2pm there is a group photo at the U.S. Bank Plaza. Then, each hour another downtown establishment is visited, culminating at the Pickled Parrot for a prize giveaway at 7:30 pm.

Many of the bars have specials during the event. Free will donations will be taken at each stop by volunteers for Gladys Ray and tickets are given for those donations that give eligibility for prize giveaways. Prizes will include a large, flat screen television and various certificates for local businesses.

Fargo SantaCon for Charity encourages costumes. Santas are the most popular, but anything goes. There have been snowmen, elves, candy canes, gingerbread men, reindeer and much more. Some unique costumes have included Cindy Lou Who from “How the Grinch Stole Christmas,” Ralphie in the pink bunny suit from “A Christmas Story,” and the folklore figure Krampus, who punishes children who have misbehaved. You can go all out or keep it simple with a holiday sweater and a Santa hat.

Fargo SantaCon for Charity is one of over 115 SantaCons being held throughout the world. In addition to many U.S. events, Tokyo, Singapore, London, Beijing, Prague and Puerto Vallarta and other global locations celebrate.

Don’t have anything to wear? Try some local stores for some unique handmade items. Your large retail stores usually have hats and holiday bling. And online stores often have complete costumes or accessories. Gompf Displays in Fargo and Applause in Moorhead may have items for rental or purchase. Pinterest has a plethora of do-it-yourself ideas.

Local artist and hair stylist Kim Jore has been one of the organizers of the Fargo SantaCon from the beginning. She says her favorite part of the event is “the gathering of friends to support a great cause,” and also she loves seeing “all the Santa characters walk the streets of Downtown Fargo. It is such a happy event!”

As an artist, Jore particularly enjoys “getting ready before the event. I like to create a new look every year. In the past years I have created costumes to be Mrs. Santa, Cindy Lou Who from the Grinch, and the Misfit Bird that can't fly from Rudolph.”

Jore also describes the Gladys Ray Shelter as “special to my heart because it is a wet shelter and also supports veterans, which is the only one in North Dakota, and it is run by one of my dearest friends, Jan Eliassen, who has a passion to help these people and this community.”

According to Leah Siewert-Oberg, Program Coordinator at the Gladys Ray Shelter and Veterans Drop-In Center, who will be coordinating the collection of donations, the shelter is always in need of ground coffee (both regular and decaffeinated), razors, deodorant, good gloves, mittens, hats, coats, and hand/feet warmers. Volunteers will be available to collect these donations and bring them to the shelter.

Siewert-Oberg says that the Gladys Ray Shelter and Veterans Drop-In Center is “honored to have been the charity for SantaCon for the last few years.” The monetary donations received via SantaCon allow them to “assist guests of the shelter in obtaining their birth certificates and IDs which are needed for employment and housing. We are also able to buy bus tickets to help with transportation when a guest secures a job. We have also used the funds for YMCA memberships to help with both physical and mental health. Every dollar goes to improving the lives of those we serve and helping them on their journey to housing.”

Siewert-Oberg’s favorite part of Fargo SantaCon for Charity is “seeing the community come together to support the Gladys Ray Shelter and Veterans Drop-In Center. We would not be able to do what we do every day without the support we receive in the F-M area. SantaCon is such a great opportunity to get the word out on what we do and who we serve. We love to share stories about our amazing guests – they are the reason we return to work every day. It is all about the guests – we learn from them every day. The only way to end homelessness is housing and they deserve to have a home of their own.”

Dean Johnson was the person responsible for bringing SantaCon to Fargo: “I had seen it being celebrated all around the globe for years and thought why can’t we do this in Fargo? Being a photographer, I thought it would be an awesome photo op for me or anyone else. The idea of seeing 100 Santas running around Downtown was too good to pass up.”

So Johnson approached a group of friends who are well connected in the community and “it really came together quickly.”

Johnson continues: “I didn’t know what to expect the first year regarding taking photos.” Now he says he “really enjoys” getting people together and taking group photos: “I get a chance to see almost everyone that attends and I like to capture friends just having a good time and dressing up in some awesome costumes.” Regarding costumes, Johnson says: “Every year I’m surprised at what people come up with.”

Johnson emphasizes the event’s charity focus: “I’m very proud of our little group of friends who came together and created this event in Fargo. We could very easily have just made it a bar crawl, but the charity aspect really gives it a purpose and that was important to all of us on the committee from day one: it sets us apart from other ‘bar crawls’ in town. I think most people who have attended SantaCon over the years are very aware of the charity aspect and their generosity has been greatly appreciated. It’s the season for giving and we know our efforts are making a difference for those in our community in need of a little help.”

Kick off at the VFW at 1 pm Various bars in Downtown Fargo, free-will donation www.facebook.com/fargosantacon