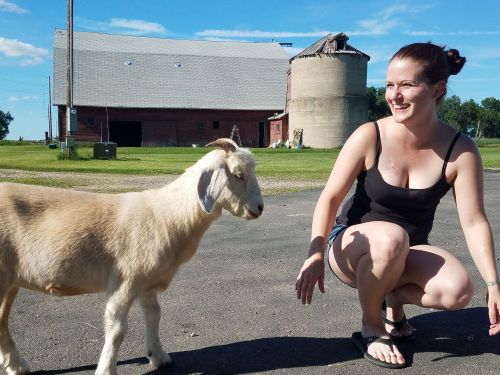 North Dakota is often known for its multigenerational family farms; not so much for its animal rescues and sanctuaries. But Jessica Hawkes, a New Rockford local, is currently working to convert a 600-acre, fifth-generation homestead into the Hawkes Homestead Animal Sanctuary.

“We currently house approximately 125 animals,” Hawkes says. “I say approximately because they are always coming and going—last week we adopted out five cats and four chicks, and this morning three more ducklings hatched.”

So far, Hawkes’s GoFundMe page has raised over $3,000 towards the goal of improving and expanding facilities on the farm. Current items on the agenda include applying for nonprofit status, upgrading the barn’s electrical system, fixing the fences, and upgrading the winter quarters.

Ideally, the sanctuary will eventually be open to the general public. Steady volunteers—which include a veterinarian, an attorney, a horse trainer, and a media guru—have been accommodating visits when possible, and tours are available by appointment and availability.

“Not a week goes by that we don’t have families coming through to meet the animals, and kids always have great questions that we try to answer,” Hawkes says. “We also bring some of our animals to the school, to the local center for adults with developmental disabilities, and to the elder care facility.”

Hawkes has raised and taken in animals since childhood, and has been outspoken in her support of animal rights. But it wasn’t until the Souris River flood in 2011, which led to the evacuation of about 11,000 Minot residents, that her passion was put to a more far-reaching, practical use.

“There were college students who had been displaced who couldn’t keep their pets,” she explains, “so we ended up taking in a bunch of chinchillas. They required special care, which we knew how to provide, so at one point we had nine of them in the house. Most were adopted out in time to new homes, so that was kind of the first experience I had with being on the rescue side. The idea to make it more formal was something friends had been joking about for years, and we realized it really was what we were already doing—taking in spare roosters, geese, cats—so this was just the decision to formalize it and take it bigger.”

She adds, “People ask how I possibly have time for all of them, but working with animals isn’t work. It’s what I live for.”

For more information, check out the ongoing fundraiser at gofundme.com/f/hawkes-homestead-animal-rescue-startup-fund.