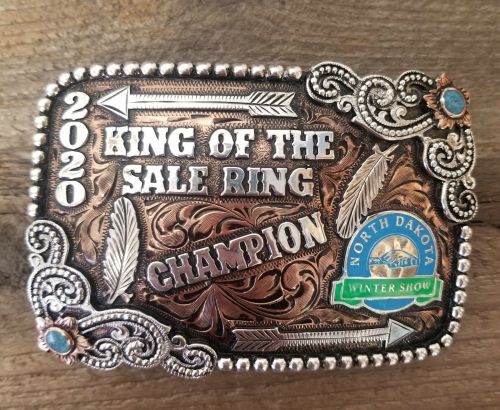 The North Dakota Winter Show in Valley City will celebrate its 83rd year in 2020. Attendees can anticipate a variety of agricultural and heritage programming from rodeos to dances to keynote speakers and vendors but this year organizers of the event have a couple of new tricks up their sleeves. One in particular is the first annual “King of the Sale Ring” auctioneer contest to be held on Sunday, March 1.

There are two rounds to the contest. The first round of participants auction off three items that they will be donating. During the second round they will be auctioning off five items provided by the Winter Show. Participants in the contest are judged in three categories: presentation, their voice and effective auctioneering which is essentially their sales skills.

“It’s a way of life for me. It’s in my blood. I enjoy every aspect of it. Typically everyone comes to an auction to find a deal and it’s the auctioneer’s job to make sure what he’s selling he gets the most money for the consignor or owner. So there’s a lot more pressure on the auctioneer than people think.” said Kelly Klein, second generation auctioneer and King of the Sales Ring facilitator. He went on to say, “Especially on the livestock end of it , when a rancher brings his calf crop into the sales barn that’s his once a week paycheck and it’s a little more added pressure on the auctioneer to get that guy the most money for his product.”

So what makes a good auctioneer? An auctioneer is a salesman and any good salesman knows their product whether they’re selling off livestock, machinery or maybe just a little bit of everything. The second big seller to the art of auctioneering is rhythm--but where does the rhythm come from?

Klein said, “It’s something that you have to practice and work with when you go to auctioneer school, there’s schools that you have to go to to become a licensed auctioneer. They kind of get you going doing tongue twisters and doing a bunch of counting drills so just basically you get out of it what you put into it, you have to practice--there’s no two auctioneers that sound the same. Everyone’s got their own style and their own chant. Everyone’s a little unique in their own way. It’s kind of fun to have them all come together and have a contest.”

Auctioneer school can last from a week to thirty days depending upon which school they go to. The two nearest schools are in Billings Montana and Mankato Minnesota.

There will be two categories of auctioneers in the contest. One consisting of the “pros” and the second being the “old pros,” in which the contestants are 65 and over. Klein added,“By rights those older auctioneers have gone through and competed in all the contests and they're getting ready to retire so to speak and it’s just kind of fun to showcase some of the auctioneers who have been doing it for 40-50 years.”

We couldn’t help but ask, what initially drew Klein to the auctioneer profession. “I was born and raised in sales barns and around auctions that was my dad’s way of making a living for many many years. It seems like in those older days, in the 70s and 80s there were a lot more auction sales than there are now, so you could just about go to an auction sale every day and that’s basically all my dad did--he drug me along when I was a little guy. I sort of grew up at ‘em and I just kind of felt a love with the auction way of life. I was infatuated with auctioneers and I knew that I wanted to be one once I got a little bit older.”

He went on to say, “Once I went to auctioneer school, I kind of had an advantage once I got there, being a second generation auctioneer. My dad had kind of taught me along the way and I was already doing some auctioning before I went to school, so school seemed to be pretty easy for me.”

With that being said we couldn’t help but ask what Klein thought the future held for the auctioneering profession.

He said, “It seems like there are a lot of auctioneers who are starting to get older, there’s not a lot of youth coming up in it and that’s another reason that I feel that it’s important to put on these contests and to showcase auctioneers. Maybe it could spark up some interest in the youth to go to school and maybe pick up the trade.”

The North Dakota Winter Show will be going on from February 29-March 7, the full schedule of events can be found at https://northdakotawintershow.com/