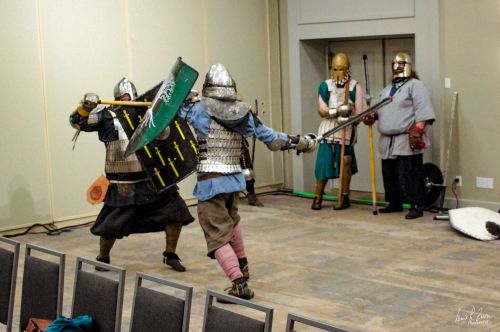 It has never been a better time to be a nerd. One look at the top-grossing movies at the box office is enough to show that geek is chic. Once solely the butt of jokes and the target of school bullies, the nerds and geeks among us find ourselves in a time when it’s socially acceptable to enjoy everything from superheroes to “Star Wars.” One thing has always remained a linchpin of fandoms over time: the convention. For the uninitiated, however, it can be daunting to get involved in more than a superficial manner. That is why events like Fargo CoreCon try their hardest to cater to both.

Recently, I had the opportunity to speak with Michelle Pearson, local comedic talent and one of the three heads of Fargo CoreCon. There are three heads of the convention: the Mind Consul, the Body Consul, and the Soul Consul. Pearson is the Soul Consul, and as such heavily involved in arranging CoreCon. “I like to be extremely busy to the point of insanity, so when I had the opportunity to work all year as a volunteer to make CoreCon awesome, I was like, “Free time? Why would I want that? Let’s do it!”

Pearson has been a member of the Inner Core (the volunteers who work on CoreCon year round) for four years. “I started as the Program Director and handled the Opening and Closing Ceremonies. The next year, I joined several other departments (social media, blogs, etc.) and have been overly committed since then.” She added, “I’m in charge of making things go smoothly; with a convention of 1,300 people, that gets to be a little difficult. Luckily, Kim and Tyler, the other heads, will be doing the same thing, and we make an awesome team. We have the final say on things as they come up.

So what exactly is Fargo CoreCon? “CoreCon is an annual Fargo convention that focuses on all things nerdy,” said Pearson. “Sci-fi, fantasy, horror, anime… we love it all! CoreCon is all about giving people an opportunity to express themselves and bond with other like-minded people. As long as you have a passion for something, really anything, you’ll find something to like. We put a huge focus on accessibility; we want others to love CoreCon as much as we do, so we try really hard to make sure everyone feels comfortable and welcome.”

One of the ways that CoreCon tries to reach out to entry-level nerds is the Super Friendly Friend Making Friends of All Sorts panel, which it has on Thursday at 9:30 PM, the first night of CoreCon. It gives attendees, even those who don’t know anyone else attending the convention, an opportunity to make friends. Pearson added, “A lot of people have met their spouses as CoreCon. Two people even got married AT CoreCon a couple of years ago!”

Of course, there are plenty of other activities, both for new and old attendees. “Panels are a big deal,” said Pearson. “Presenters are given an hour to speak on a subject, perform, lead a discussion or whatever else they think others might be interested in. Returning for its second year is the Spark Station. “This is our craft room, and there will be activities of all kinds: cross-stitching, painting, sculpting, and even a couple of naughty events…” In the Market, one can find a number of vendors and artists of all sorts. Entrance to the Market is free on Thursday and Sunday, and it is also home to CoreCon’s art show, silent auction, and merchandise. Many people also attend CoreCon for the fansuites. “These are rooms run by fans who love their particular fandom so much, they decided to have a room at CoreCon devoted to that theme.”

There are events at CoreCon for attendees of all ages. “We’ve made a huge effort to make sure that children and teens can enjoy the convention and added both a Kids CONnection and Teen Terrors room,” said Pearson. “The Anime Center shows anime all weekend, and Con Flix has movies. There are also sing-a-longs and karaoke in the Bardic Lounge. Some things are for an older crowd, but we make sure those are properly labeled as 18+.”

Lastly, Pearson had some tips to offer first timers. “Read your program guide, pocket guide, and the scheduling app. Be willing to try new things and meet new people. Ask for help as needed. Our volunteers are there to make sure you enjoy yourself. No one wants to see you having a bad time, so if we can help, tell us how! And as clichéd as it is: HAVE FUN!”