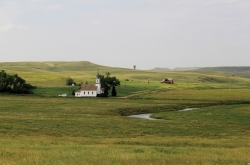 The Sims Scandinavian Lutheran Church and The Lady in Gray

Let’s be honest, everyone loves a good ghost story, or at least the vast majority of us do. But fear not, dear readers, the ghost at hand is a benevolent one. I first heard of The Lady in Gray while looking over a copy of “Spooky Creepy North Dakota” by Lori L. Orser. The book explores ghost stories, hauntings and rural legends all within our great state. The Lady in Gray just so happens to hail from Sims, N.D.

Sims is a ghost town located in a lush valley in Morton County west of New Salem. Sims started out as a Northern Pacific Railroad loop in 1880 and was known as Bly’s Mine. According to the Sims-Almont website, “The town was surveyed in 1883 by the NPRR and renamed Sims.” The only buildings that have withstood the test of time are the Scandinavian Lutheran Church (complete with both “his” and “hers” outbuildings), parsonage, and one lone abandoned house at the edge of “town.”

The church’s congregation has been active since its inception in the early 1880s. These days the church holds service every other Sunday.

The parsonage served as a church until the current Sims Scandinavian Lutheran Church was built in 1896. Interestingly enough, the congregation members would carry livestock troughs into the parsonage and turn them around to serve as makeshift pews prior to the building of the current church. The Sims Church is also believed to be the oldest Lutheran congregation west of the Missouri River.

The Lady in Gray is believed to have been the young wife of the church’s reverend who died sometime between 1916 and 1918. According to “Spooky Creepy North Dakota,” a couple from the neighboring town of Almont translated the church’s records from Norwegian to English and found that members of the congregation had sent letters to their bishop complaining of paranormal activity thus resulting in the inability to keep a pastor in the parsonage.

This summer my sweetheart and I had the privilege of seeing Sims for ourselves. We also had the pleasure of having a beverage at Muddy Creek Saloon in Almont, best known for their Testicle Festival (Rocky Mountain Oysters anyone?). Here we had a chance to visit with a few of the locals and hear their take on The Lady in Gray. Once we mentioned her, a hush came over the conversation.

“She’s there all right,” said an unnamed Almont resident, who elaborated that people have seen a figure walking around the grounds at dusk. After a bit of prying, our new friend admitted that, while on an early morning mail route, she saw The Lady in Gray draw back the curtain of the upstairs window.

The parsonage in Sims stood vacant for nearly 25 years, but received a bit of a facelift in 2006 courtesy of a grant made possible by Preservation North Dakota and with matching funds from the Sims Church. The restoration was completed in 2007 thanks to thousands of volunteer hours. In 2008 the parsonage was visited by honorary chairperson of the Save America’s Treasures Program, First Lady Laura Bush. According to The Old Red Trail website, North Dakota was the last state she visited. The former First Lady personally selected the Sims Parsonage and remarked: “I have saved the best for last.”

It is unknown whether or not The Lady in Gray was present during the visit, but odds are she would be pleased.