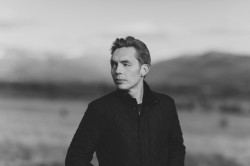 “As a minimalist, everything I own serves a purpose or brings me joy. Everything else is out of the way,” Joshua Fields Millburn said to HPR in an interview at Twenty Below Coffee.

Millburn and Ryan Nicodemus, The Minimalists, were in Fargo for the Misfit Con this past May. During the conference, The Minimalists showed a private test screening of their first film, “Minimalism: A Documentary About The Important Things.” It’s set to release publicly in 2016.

The two are renowned writers and public speakers who have an audience of about 4 million readers. It’s their less-is-more messagethat has resonated worldwide – and it’s all happened within the past five years.

What’s minimalism? Is it just about getting rid of stuff?

“Well, that’s the first step. But I think anyone can go home right now and rent a dumpster and throw all their shit in it and be totally miserable,” he said.

“Consumption isn’t the problem. We all need some stuff,” Millburn said. “Compulsory consumption is the problem – thinking that we have to buy something because we think it’s going to make us happy or cool or fit in or satiated, even.”

Minimalism is about living life more deliberately, he said. It’s not necessarily about focusing on less. It’s about making room for more, whether that might be time, growth, contribution, experience or conversation.

Certainly a t-shirt, television or pair of shoes can add value to a person’s life or serve a purpose. But what about that 45th t-shirt, that eight pair of sneakers or that third television? Is it possible that when we have so many possessions it waters down our ability to appreciate or take care of the more important possessions we have? Is it possible that if we spend so much time taking care of our possessions we take away from opportunities for personal growth and relationship building? The Minimalists say yes, definitely.

Millburn suggests people start by asking themselves: “Does this thing add value to my life?” or “How might my life be better if I owned less stuff?”

Ironically, before becoming a full-time minimalist writer and public speaker, Millburn managed 150 retail stores. He said he had a big house, luxury cars and all the material possessions every “successful” person his age “should” own. Yet he was very unhappy. He was working 70 to 80 hours a week just to keep up with the lifestyle.

“It was very selfish because it was about me and what can I amass as opposed to what can I contribute,” Millburn said.

After his marriage ended and his mother died, all within the same month, Millburn said he rethought everything. It took having to deal with his mom’s three-bedroom-apartment-load of stuff that helped him realize he didn’t need to hold on to these things to honor the memory of her.

Of course, every person values different things and every person has a different story. Millburn said his minimalist lifestyle may be a bit extreme for some people. According to The Minimalists’ website, he owns less than 300 items. That includes everything from his dining room table to his toothbrush.

“We are not prescriptive,” Millburn said. “We don’t say, ‘Here’s the way you should live your life … Here’s the 100 things you should own to be happy.’”

One of the greater purposes of the documentary will be to give people an even broader perspective of minimalism. The film contains interviews with different types of minimalists, including an architect, news anchor, traveler, entrepreneur, fashion designer and neuroscientist.

“We want to get all these different flavors of minimalism … because up until now it’s sort of like, ‘Well, hi. This is Ryan, I’m Josh. This is the Josh and Ryan show.’”

Yet, The Minimalists do what they do knowing full well that any human being could benefit from learning and applying some of the principles of minimalism. Like this one: “Love people, use things. Because the opposite never works.”

Learn more about The Minimalists: theminimalists.com

Learn more about the documentary: http://minimalismfilm.com/