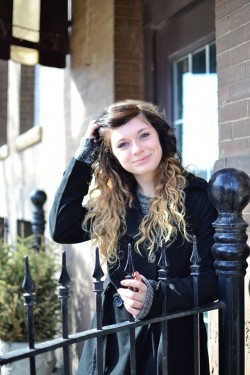 She says she doesn’t like when people tell her who she should interview. She knows who she wants to interview: random people who she finds spur of the moment. The interviews aren’t supposed to be predetermined.

Kaytlin Dargen is the primary photographer for Humans of Fargo, a community project inspired by its widely famous predecessor, Humans of New York. Humans of Fargo isn’t the first project to spring up as a mirror of the booming New York photo blog, and it likely won’t be the last. Still, it has a unique aspect: the age of its founders.

Creators Kaytlin Dargen and Nicole Mendoza are 16 and 17-year-old girls. The teens have grown up in Fargo and currently attend Fargo North High School as juniors. They’re young, but their ambition has propelled them to take action rather than merely dream.

The goal of their project is to showcase the diversity of Fargo, particularly the variety of knowledge and wisdom the girls believe the community has to offer. They are providing the community with an outlet that connects its people.

The girls approach those who they think have something to say. Some people have chosen not to engage, Kaytlin says, but generally people have been very receptive. The teenagers are still exploring how best to approach strangers, Kaytlin adds, but they have gotten better at getting out of their shells.

The project, which launched at the end of March, took off and gained a following faster than the girls expected. Now, random people recognize them, and they have received resumes and portfolios from individuals interested in joining their team. The girls are flattered, but Kaytlin says the plan is to keep it between them for now. They’re having a lot of fun and expect to have more time to dedicate to the project during the summer. 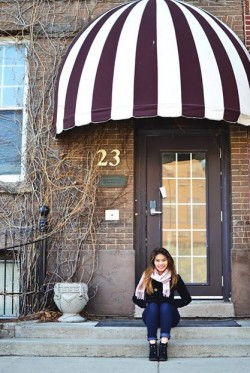 One of the most rewarding aspects of the project is knowing their posts can spark inspiration, Kaytlin says. The girls choose to highlight parts of people’s responses that are universal, and ones which others can learn from or relate.

Kaytlin acknowledges that Fargo is a small, close-knit community, which is very different from New York. Followers are more likely to recognize the individuals featured, and this can prevent some people from willing to disclose too-personal of information.

She says the girls have to remind themselves of the impact these posts can have on people. When they interview people, the girls let their subjects know they have a large following. But they still have to remain aware of the words they choose to highlight from an individual, and sometimes that can be difficult.

Despite this challenge, Kaytlin says they are hoping the project will continue to grow. She says it has plateaued right now, which has been a breath of fresh air, but they look forward to more opportunities for further growth. In a dream world, Humans of Fargo would have an exhibit at the Plains Art Museum, she says. And maybe even a book, like Humans of New York. They expect it would be a hard copy of content similar to what they feature online.

For now, the teens plan to continue posting once every day, and will aim to post two or three times a day during the summer. They don’t plan on slowing down. They want Fargo to get to know their neighbors.