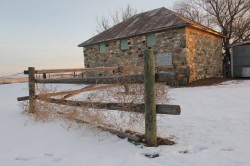 Surrounded by a tumbleweed-ridden wood fence, the Schafer jail is a small structure in rural McKenzie County built of native fieldstone and concrete. It was built in 1910 and is one of very few structures that remain in the former county seat. Outside of the building is a weathered metal sign that notes that it served McKenzie county for 31 years and “it was from this jail that Charles Bannon, the confessed murderer of the six members of the Albert E. Haven family, was taken by an angry mob and lynched off a bridge, half a mile east of the jail.”

The interior of the jail structure is sparse--more than likely a shell of what it once was, with it’s cold clammy concrete interior and small barred windows. Though the cells are no longer intact, one of the walls still boasts writing from a former inmate dated 1923. Now serene on the January day I visited, the Schafer jail is the site of North Dakota’s last lynching on that cold fateful night in January of 1931.

No names of the 70-plus men, who took the law into their own hands in an act of frontier justice, have ever publicly surfaced, nor has anyone ever confessed while the lynching was under investigation.

Charles Bannon worked as a hired hand for the nearby Haven family. The Havens were considered to be fairly well off, with a fair amount of livestock and machinery.

One day the neighbors started to question the family’s whereabouts. Albert, 50, Lulia, 39, Daniel, 18, Leland, 14, Charles, 2, and Mary, 2 months, had not been seen since early February in 1930. Neighbors further questioned Bannon’s intentions when he claimed that the Havens left the area and in their absence he was renting out their farm. His father James helped him care for the land and livestock.

The last straw for the Havens’ neighbors was when Charles started to sell off the Havens’ livestock, crops, and machinery that fall. He claimed the family left for Oregon. James left the farm to head west, to supposedly seek out the missing family.

Bannon soon caved and confessed that it all started with the accidental shooting of the eldest son--he then admitted to killing the remainder of the family out of fear.

According to N.D. Courts, he was originally held at the larger and more secure jail in Williston in Ward county, but was then moved to Schafer so he could be tried in McKenzie county. His father James Bannon was named an accomplice, and was extradited from Oregon back to North Dakota and was also held at the Schafer jail.

To a large number of locals, justice couldn’t come swiftly enough for young Bannon. More than 75 men in up to 15 cars pulled up to the jail in the wee hours of January 29.

The mob made their way into the jail, knocking the door down. Sheriff and Deputy tried to intervene but were gingerly escorted away from the premises once they refused to hand over the keys to Bannon’s cell. The mob proceeded to attempt to break into the steel doors, but were met with such difficulty that they almost abandoned their efforts until the lock was successfully broken.

According to Fred Maike, who was being held on theft charges, the mob was surprisingly focused and well orchestrated. The mob then placed the sheriff and deputy in the broken cell along with James Bannon and Maike, blocking the door with a broken timber.

The mob then led young Bannon out of the jail with a hemp noose. They planned to take Bannon out to the site of the Haven farm to hang him where the grisly crimes were committed. The caretaker wanted none of it and threatened to open fire if the mob did not disperse.

The mob relocated a half mile east, to the newly constructed bridge over Cherry Creek. The rope was still tied around Bannon’s neck. Someone tied the other end to the rail of the bridge. According to the January 31, 1931 edition of The Bismarck Tribune, The hangman’s knot was tied by someone with "expert knowledge."

Charles Bannon became the last man to die by lynching, once he was pushed off the bridge.