As I walked inside from Broadway that dreary, overcast early evening, I was unaware I was about to see some amazing sights without ever having to leave my seat. I was entering “Be More Colorful,” a Fargo virtual reality firm that had just turned one year old on August 1st.

Since then, the brainchild of husband and CEO Matt Chaussee and wife and president Katie Chaussee has seen an incredible amount of business, and not always from the type of clients I would have expected.

Admittedly, my own experience and knowledge regarding virtual reality (or VR) was quite limited before the interview. I would receive quite the education on the subject that night as Matt and Katie, who are also the only two full-time employees at Be More Colorful, explained applications of the technology to me I wouldn’t have even thought of, and described the renaissance that the technology has been going through in recent years.

“Be More Colorful” had its genesis during a crowdfunding campaign on Kickstarter last summer. Matt said, “We weren’t just looking for funding, but also knowledge from the people of North Dakota about what spaces should be captured with 360 degree photography.”

The Kickstarter ultimately did not reach its funding goal, but it succeeded wildly in another way. “We got a lot of visibility,” Matt said. So far, Be More Colorful has received four TV and four radio spots, as well as two articles in local publications, and the technological wonder couple has been swamped with clients ever since.

“It was amazing to see so much support,” said Matt. “We got people thinking outside the box and doing things differently.” He sees technology as “something that engages,” and rather than being solely applicable to, say, video games or flight simulations, he sees the largest area for expansion in the world of virtual reality being destination marketing and tourism.

Admittedly, I hadn’t thought about the VR phenomenon from that angle before, but as he explained it to me I realized there was a whole world of opportunity in that direction. The tourism departments of the states of Minnesota and Wisconsin are showing great interest in its applicability to destination marketing.

“We’re creating imagery that makes you want to go out and see it for yourself,” he said. As if responding to the rebuttals of skeptics, he told me that they are not trying to “replace” the experience, but to think of it this way: instead of a few static images in a brochure, what if a potential tourist could actually “take a trip” right there in the office, which would sell them on the idea of actually going?

He pulled up a recent project of theirs on a smartphone, a 360 degree exhibit of the ship at the Hjemkomst Center in Moorhead. 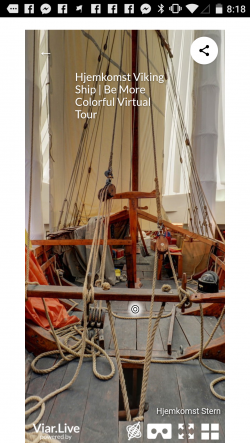 Normally visitors couldn’t step into the ship, but Matt and Katie got special permission to go inside and take several photographs of the interior of the ship.

All of their projects and exhibits are browser-based, no app-downloading required. He slipped the phone into a cardboard headset and as soon as I put it on I was inside the ship. I could look down at the grain of the boards comprising the deck below, and up to the ceiling above.

By focusing on certain “gaze points” by centering them in my field of motion as I looked around the ship, I could ‘travel’ around its interior and take closer looks at its different sections.

He pointed out how technology like this could also be revolutionary in the field of accessibility issues for those with disabilities, pointing out that a wheelchair-bound child on a recent tour at the Hjemkomst Center, got to take a tour the same way I just had, and that the rest of his class was jealous of his opportunity.

Matt’s told me about how Katie recently went “over the edge.” “Oh yes,” she said, and told me about the recent opportunity due to a fundraiser with Charism where she got to rappel down the side of the Black Building downtown with Hawkeye the Red Hawks mascot. Of course, they couldn’t resist the opportunity to put a camera on her helmet and create a virtual reality experience of it.

I slipped on the headset again and was able to look across the rooftops of downtown Fargo, up the rope to the sky above, and down to the street, as well as see Hawkeye rappelling beside me. I admittedly got a little dizzy from the realism of the simulated heights.

Matt told me how many of their projects, such as Hjemkomst, did not necessarily need to be viewed through a cardboard headset, but could also be viewed as 360 degree photographs through the browser. He wants to be proactive regarding the people who react negatively to full VR immersion.

Be More Colorful is also working and collaborating with teams as close as Canada and as far as the United Kingdom, Slovenia, and Moldova.

They have had clients as diverse as Woodrow Apartments (3D apartment tours, anyone?), Bonanzaville, and NDSU. They created a virtual tour so someone can “visit” Buffalo River Pumpkin Patch any time of year, even when the ground is frozen and the patch closed.

Their current projects are one at the International Peace Garden which they are doing pro bono as a “thank you for the visibility,” and a tour of the Red Willow Revival Camp, a Bible camp that is also trying to market itself as a general retreat center.

New applications of VR they have on the docket for the future: collaborations they hope to do with Google Street View, business training, the mind-boggling 360 degree wall printings they are selling.

“Every job is individualized for each customer,” said Katie. “We’re just scratching the surface,” said Matt.