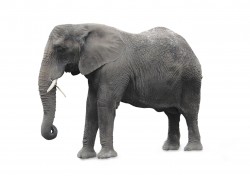 An elephant is buried under Horace Mann Elementary school. At least, local legend tells us this.

It’s a story almost as old as Fargo itself: an elephant with a traveling circus died during a tour stop in town and was buried on the land where Horace Mann now stands.

The legend has persisted through the ages, through Horace Mann alumni, employees and neighborhood residents. Today, however, the story that has lost a lot of steam, reduced to a hokey little Fargo myth that many people toss aside.

But there are those who believe there’s something to this story, or at least a basis for it all. It’s why I teamed up with some of the savvy experts on the elephant legend earlier this year for one last big effort to research this story to a conclusion. And we’ve come a long way in nine months.

It was during last February, up to my elbows in dishwater at my old hotel job, that I decided to take a crack at the legend. It was winter. I was bored. I knew the story from my years in Fargo Public Schools, and it’s one that’s fairly well-known in Fargo.

I had to take a shot at researching; after all, I’ve been climbing my family tree since I was 11, and it was a nice change from trying to find dead ancestors to trying to prove a dead elephant.

Lo and behold, my primary research presented me with Dan Mahli of Fargo’s city planning department, and Steve Tollefson, former head of maintenance at Horace Mann.

Mahli’s own effort (the Pachyderm Recovery Project) in 2001 with anthropologist buddy James Wendt made a cover of the High Plains Reader that year, and Tollefson proved invaluable as the “curator” of the story during and after his years at Horace Mann. I had the perfect people to help out with the legend, which still went inconclusive even after their respectable research couldn’t confirm it.

Slowly but surely, we’ve chipped away at the elephant. Every circus to visit Fargo prior to Horace Mann’s construction in 1915 has been catalogued through old Fargo Forums, and it’s just a process of elimination of the ones that set up on Hector’s Addition, the land where the school sits.

Eighty circuses stopped in Fargo between 1878 and 1915, at least 10 of which camped on Hector’s Addition. We’ve even been able to put a date range on the elephant’s rumored death – between 1892, when Martin Hector purchased the land, and 1905, when sewerage construction on 11th Avenue forced circus setups to Ninth Street South.

It took a lot of mileage on the microfilm to construct that date range, but it’s been getting narrower with every visit to the Fargo Public Library’s microfilm collection. And of all the circuses to visit Hector’s Addition (and Fargo for that matter), nearly all had elephants, save for some dog and pony shows and one wildcat exhibit.

And while no dead elephants have turned up yet in the Fargo Forums of yesteryear, a camel is confirmed as being buried near Fargo North High, dying from disease during Barnum and Bailey’s visit in summer 1907.

In fact, there have been a few incidents with circuses in Fargo, from lions being born off of Main Avenue in 1904 to a trapeze girl dying from typhoid in 1905.

But no dead elephant or smoking gun yet. With about 30 circuses left to sift through in the old Forums, it’s a slow-going process, but one that has coughed up a few findings pertinent to the Fargo folklore.

Until every circus has been followed up on through the many miles of microfilm, there’s no conclusion yet to Horace Mann’s elephant legend.

But with the facts of history putting circuses with elephants on the schoolyard before Horace Mann was built, there very well could be an elephant in the ground, or at least something to the story.

If you have any tips or knowledge on the legend of the Horace Mann circus elephant, email Jack Dura at jack@hpr1.com or call Steve Tollefson at 701-235-3880.