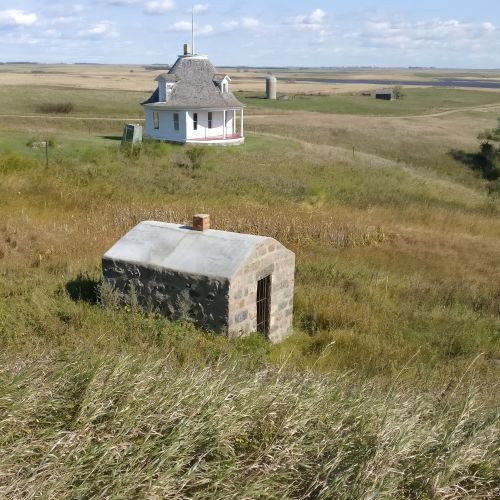 The Hurd Roundhouse is a unique site situated in the rolling hills of Wells county, the structure, as well as the nearby town of Hurdsfield, bears the name of Warren Hurd who worked as a land agent for the Northern Pacific Railroad. The Hurd house’s initial purpose was to serve as a land office and space to entertain potential land buyers. The house is two stories high, has a wrap-around porch and a round roof that also supported an observation deck. To this day visitors still experience a sense of awe at the wide expanse of open prairie and native prairie grasses. The Hurd house even had the rare luxury of running water at that time courtesy of the nearby artesian well. The well-house is onsite and is constructed of native fieldstone and that too has experienced its own restoration just a few years ago.

Lloyd Weckerly grew up a matter of miles from the Hurd Roundhouse. In fact, this lifelong cattleman’s family was an integral part of the preservation of the site which was then placed on the National Historic Register in 1977.

“My grandfather built the farm to the south of the Hurd house by three miles. We used to climb up on the thing and play on it when we were 10-12 years old. Then about in the 50s my father he kinda got organized and decided it should be restored for the historical society and Wells County. So he and some other senior citizens got ahold of it and they wound up and got busy and did a lot of work on it... painted it, fixed it up quite a bit and got some land acquisitions taken care of so it was an entity by itself.” Weckerly said.

“The Northern Pacific Railroad got every other section along the 50 miles along the mainline on the railroad. Well, when you went to Steele that was where the mainline was. So there was all this land there to sell and the Hurd family came out there and kind of got the drift that they were selling the land and speculating the land and they were selling it to homesteaders. The railroad came to Bowdon, and there were a couple of families in Bowdon who had livery stables and they used to haul pioneer people out there and house them in that roundhouse kind of as a showplace and they’d make sales to these people for land.” Weckerly said.

“The land that I have down there or my grandfather had, that originally was Northern Pacific, anyway that was the beginning of that. Now it’s up to some of us younger people--and I’m not young anymore I’m getting quite a way down the rope. There aren’t too many younger people who are really too concerned about our roots, understand the struggle that our elders put in to even make it work in that country, digging wells and fires and all of that other stuff that went on in that era.”

Prior to the restoration, Weckerly remembers the previous owners of the structure shoveling feed into it and using it as a granary. It wasn’t uncommon to see livestock in and around the windowless structure.

When his father, who was also a local history enthusiast, was involved in the restoration, Weckerly now in his late-80s remembers saddling up his horse and riding to the site from their ranch and having cookouts, his brother still helps out at the site. “I’m the third generation and my son is fourth-generation, we intend to keep the historical value of that area going,” he said.