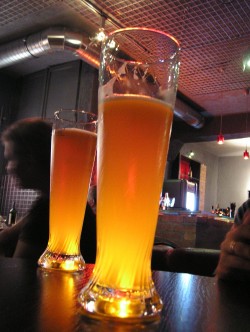 Katy Perry’s “Last Friday Night”, the song in the top position for Hot 100 Billboard chart, recounts the costs incurred when people over-indulge in their drinking and spending habits while having a good time. Aimed at young people, including teens, the song’s lyrics hit close to home in North Dakota, where the cost of underage drinking is quite high. According to the Underage Drinking Enforcement Training Center (www.udetc.org), in 2007 underage drinking cost North Dakota $141 million, or $2,000 per youth. These costs included medical expenses and lost wages.

Meg Luther Lindholm, producer for High Risk High, a project supported by Prairie Public Radio, recognizes that money and/or tragedy is the way to get people’s attention. “Unless there’s a tragedy, like somebody freezing or someone found floating in the Red River . . . Everyone’s attention would turn to the question of, you know, ‘How did this happen? Why did this happen?’ and the issue would die back down, as it always has, with little or no discussion of the issue of drinking, drinking among the young,” she said.

Lindholm’s attention was caught by a single statistic. “You know, it really wasn’t until I was in my car driving one day and a short story came across on the Prairie Public newscast saying that North Dakota ranked first in the nation for underage binge drinking, and that first in the nation really caught my attention.”

A media professional, Lindholm had produced a public affairs talk show in New York City for four and a half years. She moved to the Fargo-Moorhead area to join the man to whom she is now married. Wanting to go below the surface and find out what’s going on, Lindholm went to Bill Thomas, director of Radio at Prairie Public, with whom she had worked on other projects. “A one hour documentary was the original idea.” Thomas said. Their goal was to advance discussion on the problem, not come up with solutions, or preach, or counsel, and Lindholm was confident she could get people to talk. “With every project I’ve ever done, what I always find is that people want to open up and share their experiences, all it takes is for someone to open up the subject and ask,” she said.

They spent a year trying to get funding for the project. Sponsors were difficult to come by at first, but when funding did come, the project steadily grew in the last two years. Currently sponsored by the Otto Bremer Foundation, the North Dakota Department of Human Services, and the Fargo-Moorhead Area Foundation, as well as Prairie Public’s members and funders, High Risk High’s project stories, detailing personal experiences based on underage drinking in North Dakota, have aired on Prairie Public Radio, and are featured on the project’s website, www.highriskhigh.org. Combining the website with public radio broadcasts broadens the discussion throughout the state. Thomas notes that this discussion includes teachers, civic leaders, legislators, and parents. Lindholm, Thomas, and others with the project also lead discussions in communities and presentations in classrooms – free of charge.

“One of the things I’m hoping to do this fall is have some public forums where we talk about how parents can communicate effectively with their kids about alcohol,” Lindholm said. “I think that there’s a middle ground.”

Lindholm finds room for everyone in that middle ground discussion, interviewing a bartender in Grand Forks who describes a changing culture, where bar owners compete for business. She notes that there are alcohol-free options for students in Grand Forks, citing Night Life @ UND, a program that provides free events on weekends throughout the academic year.

Carrie Sandstrom is one of those producers. A high school senior in Bismarck, she became involved last January, starting the High School Group. “We were discussing different ways to engage teenagers, and Facebook is something that practically everybody uses and we have access to a lot of people through it,” she said. Sandstrom has been involved with SADD since 7th grade, and was recently chosen as SADD student of the year. She describes the High Risk High –High School Facebook group as being a safe place for high school students to openly discuss issues where only members of the group can participate, noting that courage in the thread posts is rewarded with respect. “What I’ve experienced from a lot of my peers is respect, because when you stand up for what you believe in, people respect you regardless of whether they agree with you – or not,” she said. Sandstrom takes her role very seriously and tries to post at least once a week to keep the group active with discussions, stressing that the High Risk High – High School Facebook group is without judgment. “It’s just a place for everyone to voice any comments and concerns, but those comments and concerns don’t leave the group and they’re there for people to talk about – the hard things,” she said.

The project’s mission is to encourage discussion, without judgment, or answers. As the project’s Executive Producer, Thomas states that the personal stories offer people “a better understanding of binge drinking among youth – that’s a little different than having a solution. We’re giving you a lot of information.”

Personal stories and discussions about underage binge drinking in North Dakota may redefine what we consider to be tragedies in North Dakota. “We still define tragedy as someone dying,” Lindholm said, “rather than a kid dropping out of school, or getting kicked off a sports team, or having to cook a meal for sibblings because mom is too inebriated to be able to do that, or being the victim of date rape.“

On the other hand, on July 28, 2011, Jonathan Shorman reported in USA TODAY ((http://tiny.cc/NDbinge) that the Substance Abuse and Mental Health Services Administration named North Dakota as the state with the highest percentage of binge drinking for ages 12 and older, which includes residents of age.

New information and insights create additional perspectives on alcohol use and abuse, affecting all ages. Via the High Risk High website, live presentations and discussions, Facebook groups, and radio broadcast stories, Lindholm extends an invitation: ““Be a part of the conversation . . . about drinking.”