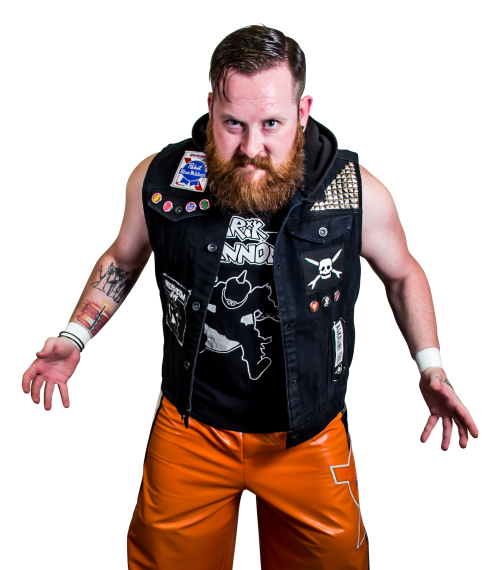 F1rst Wrestling is based out of Minneapolis and is run by Arik Cannon who also wrestles for the promotion. Cannon began his wrestling career in 2001. Since that time, he has spent time as a wrestler, a promoter, and also a teacher at Ken Anderson’s The Academy: School of Professional Wrestling. In 2007, Cannon decided to start his own promotion.

“F1rst Wrestling is something I started in 2007 just as a means to try to change our landscape as it pertains to professional wrestling here in Minnesota,” Cannon said. “There was just a lot of things going on back then that I wanted to try to change. I wanted to try to speed things up – put a little more edge on local wrestling. Things were, in my opinion, getting very stale. So, I wanted to do what I could – or at least what I thought I could do – to make it a little more fun, a little more exciting, a little more appealing to a wider audience and slowly but surely, that’s what we’re doing. It’s been a long time. It’s been a bit of a struggle, a bit of an uphill battle, but we’re doing some really cool stuff with F1rst Wrestling and I’m excited about it.”

The lion’s share of F1rst Wrestling’s shows take place in Minnesota, but they have held events in Wisconsin and Iowa as well. Cannon has visited the Fargo-Moorhead area several times working with different promotions, but he said one of the cool and exciting things for him as a promoter is venturing into new areas, like Fargo.

“It’s a new market for us,” Cannon said. “It’s a new group of fans for us. Some of them have seen some of us before at other shows, or on TV, but they’ve never seen anything like what F1rst Wrestling is going to bring to the Sanctuary.”

Cannon said he would love to bring shows back to Fargo, Wisconsin, and Iowa, and add a show to the Chicago area in 2020. If ticket sales are any indicator, Fargo should be a lock for next year. At last check, there are only around 100 tickets still available for F1rst Wrestling: Live! and those are general admission, standing room only.

“We’re almost at capacity, which is a great sign as it pertains to F1rst Wrestling coming back to Fargo which is something we are already planning on,” Cannon said. “To come into Fargo for our very first show, if we’re able to sell out the Sanctuary, which is a beautiful venue, would be amazing. That would be a great way to kick this off and start to build a foundation relationship with the wrestling fans in Fargo.”

Wrestling fans in Fargo go through the ebbs and flows of wrestling fans everywhere, which Cannon said is in constant flux. Right now, with rivalries taking shape between bigger promotions like World Wrestling Entertainment and All-Elite Wrestling, the pendulum of wrestling’s popularity seems to be swinging to the positive side.

“There is definitely a never-ending, cyclical type of thing with professional wrestling where it gets really hot, it gets really cool, it gets trendy, and then those fans – those kids – that grow up with it being cool start to get a little older,” Cannon said. “They find other things in life, and then wrestling starts slowing down a little bit, but, fortunately, we are in the middle of a very cool, very exciting, huge uptick with wrestling. We are teetering on wrestling being very cool and very trendy all over again. It’s exciting to be involved on this side of the guardrail, but also just as a fan. It’s cool to see all the things that are doing so well, and all these guys and girls that I’ve wrestled with for years finding success with bigger promotions and national TV exposure and all the stuff. It’s very fun. It’s very exciting.”

Cannon, said fans coming to the show will have a lot of fun with the variety it will bring. The event will feature a wide range of talent, including nationally recognized names.

“WWE/ECW legend, Tommy Dreamer will be there,” Cannon said. “Orange Cassidy, who’s very popular with wrestling fans today and is a part of the AEW promotion, which is on TNT every Wednesday (will be there). We’ve also got Joey Ryan coming in. He’s a very polarizing figure. A lot of people love him, and a lot of people don’t understand what it is that he does in the ring, but I think the crowd that we’re going to draw and the clientele that we normally have will love it.”

Along with Dreamer and Cassidy, Cannon has recruited several names familiar to the local community.

“Darin Corbin [and] Ryan Cruz, from the Detroit Lakes area, will be there. We’ve got a couple people coming back to Fargo – Scott Story (and) Kara Noia, who grew up in Fargo. Sylvester J. Fox will be there. He’s another local character. That’ll be fun for those people as well. So, we’ve got a bunch of homegrown kids that have gone on to do some crazy, fun things with their lives coming back to Fargo to wrestle in front of some friends and family. It’s going to be a good time.”

For wrestling fans who are not familiar with F1rst Wrestling, there is a wealth of media available to get up to speed before Friday’s show. They have a large social media presence and can be found on YouTube, Facebook, Instagram, and Twitter by searching for ‘F1rst Wrestling’ using a ‘1’ in place of the ‘i'.

“All of our shows end up on DVD and Blu Ray, and you can download them through our distributor, but we also have a YouTube channel where we’re going to start putting up a lot more content,” Cannon said. “There’s free, full matches on the YouTube channel.”

For those fans who have never attended an independent wrestling show, it is an experience unlike other events. The wrestlers tend to really work the crowd – either to make them love them or hate them, which can lead to a lot of fun. There is also a chance to interact with the talent as they sell merchandise and take photos with fans. Cannon said along with several of the wrestlers selling their own merchandise, fans will also have the opportunity to purchase F1rst Wrestling merchandise as well.

F1rst Wrestling: Live! is nearly sold out, and Cannon wants to warn those who may be holding off on buying their ticket to reconsider if they want a chance to get into the show.

“Generally speaking, independent wrestling fans don’t do the whole presale ticket,” Cannon said. “It’s normally an, ‘oh, we’ll get them when we get there. We’ll just buy them at the door.’ There’s a chance that there aren’t going to be many left at the door on show day, which is amazing. We’re on the verge of a sellout in our first show in a new town and I’m really anxious and excited to see how it pans out.”

It’s been over a year since indy wrestling has been in Fargo, and Cannon wants to make sure fans know F1rst Wrestling will be in town and ready to deliver a show they won’t forget.

“We’re going to try to bring something a little new, a little different, and a lot more fun to the area than they’ve been accustomed to,” Cannon said.

Above all, Cannon wants to make sure fans know wrestling is back in town and is excited to put on a show that fans will leave craving more of.