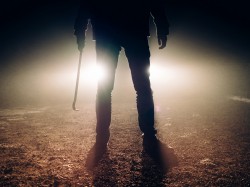 During the dark hours of a very early morning in late August of 1975, Sandra Larson found herself completely bewildered in the back seat of her own vehicle after an encounter she and her daughter, as well as her boyfriend at the time, had experienced. To this day, there still isn’t a real explanation of the events the three experienced almost forty-two years ago.

They had been traveling very early one morning, around 4am, down the stretch of road along I-94 toward Bismarck when, at about forty-five miles out of Fargo, the group saw between eight to ten bright glowing orbs descending from the sky up ahead and start to approach them. They heard a loud sound resembling the rumbling of thunder in the distance, only growing louder as the lights grew brighter while drawing closer.

It was then that a feeling of complete disorientation overcame the travelers as the mysterious bright lights came closer to the vehicle. Later, Sandra and her daughter would describe the experience as feeling “stuck” where they sat in the vehicle, unable to move or react.

When finally able to move from the feeling of being mentally and physically frozen in her seat, Sandra realized she was no longer seated in the front of the vehicle, next to her boyfriend, but instead in the backseat, while her daughter Jackie had replaced her in the driver’s seat.

The three continued down the I-94 until they reached the nearest gas station. Assessing the situation and trying to make sense of it, they checked the time. An hour had gone by since the bright lights, that they couldn’t account for.

Sandra Larson’s story was revealed to the public when psychologist R. Leo Sprinkle, a professor and therapist from the University of Wyoming, came to investigate the case. Under hypnosis, Sprinkle uncovered a series of events that Sandra couldn’t completely recall while conscious.

From their sessions, what was gathered of Sandra’s missing time was that she had been abducted from the vehicle that her boyfriend and daughter were riding along in and brought aboard a craft unlike any that she could remember. Though hazy and disoriented at the time, Sandra attempted to describe what took place to the best of her ability, involving experiments on her body, and the beings that were present aboard the craft she was taken to.

Larson described receiving a bizarre medical examination that involved being probed and having a mysterious clear liquid rubbed onto her body along with other strange procedures, one of which included the use of a metal tool to gather a sample from her by scraping the inside of her nostril.

Sandra described the beings performing the procedures to her as appearing “like mummies,” claiming that the dim figures of her memory were covered in strange wrappings, while their bulging eyes peered out at her. Their arms were like “segmented metal rods found in a Meccano set”.

Larson’s description of her experiences has since been a topic of scrutiny. People claimed her experience was a hoax or the result of a hallucination or mental instability.

In the years since the encounter, forty-five miles west of Fargo, in the early hours before dawn, the credibility of Sandra’s story has diminished, becoming one of the best known but least believable UFO encounters in North Dakota.

The Sandra Larson incident, however, changed the way the scientific community examines such phenomena, taking into account psychological effects such as trauma and perception.

[Editor’s note: Seng is the host of the ‘Whispers in the Night’ podcast, which explores topics of the paranormal and unexplained in the Midwest]