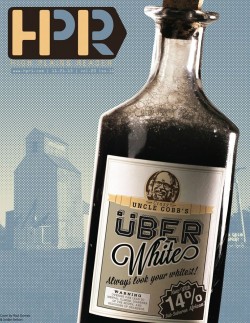 The presence of racism and hate has perhaps never felt more real in 21st-century North Dakota than now — especially for the tiny town of Leith, where a Nazi-flag-waving white separatist, Craig Cobb, is scheming to take over.

While Cobb has put the town on red alert for his bold and forthright racist actions, one group in particular, UnityND, is taking him head on.

The local nonprofit organization formed just this September to essentially help Leith get rid of Cobb, or at least thwart his plans to turn the town of about 20 people into a whites-only, neo-Nazi-controlled town.

“We don’t assist Leith in any way besides being there, standing shoulder to shoulder with them, letting them know that we support them and that we will be there throughout all of this,” said Scott Garman of UnityND.

One of the biggest stands UnityND has taken to help Leith was organizing an anti-hate rally in September. About 400 people showed up in front of Cobb’s house, chanting and holding protest signs to show their opposition.

“This is not a single-day event; we will be back again and again until you’re gone,” Garman said into a megaphone at the rally.

Garman said UnityND is planning to host a summer festival with live music and a powwow next year at Leith’s city park.

Currently, Cobb and fellow neo-Nazi Kynan Dutton are being held in jail without bail on charges of terrorizing Leith residents by walking the town’s streets while carrying guns. Of the seven charges the two now face, some require a minimum two-year jail sentence if found guilty.

In the meantime, the city of Leith is raising money for a legal defense fund that’s absolutely needed to pass legislation that would undermine Cobb’s plot to take over.

Anyone can donate by visiting leithnd.com or attending UnityND’s fundraiser on Dec. 7 in Bismarck. Seventy-five percent of the funds raised will go to Leith and the rest will help the nonprofit continue its mission “to actively work to find solutions to the problems of racism, classism, sexism, and hate,” according to its website.

UnityND member Kade Ferris said that even with the arrest of Cobb, there is still much to do.

“I was up along the Missouri river just this summer and I noticed flags flying at some ranch,” Ferris said. “They had a flag of Germany, they had an American flag and a confederate flag flying — there are some white supremacist groups in North Dakota. ... They are active and they are out there and that could be a potential problem because there is so much diversity in the oil patch.”

Garman said Jamie Kelso, a white supremacist living in Grand Forks, is perhaps the biggest threat to North Dakota, even more so than Cobb.

Kelso has his own radio show and a large following on a popular white supremacist website. Southern Poverty Law Center even placed Kelso in its “Intelligence Files,” calling him an “extremely hyper organizer and serial joiner of religious sects.”

“He has been trying to work himself into the Republican Party,” said Garman. “And so he started hosting Ron Paul presidential parties where he would then slowly slip in the fact about how other races were controlling the economy and bringing us all down. It was a brilliant tactic.”

Garman said one of the ways UnityND is attempting to take away white supremacists’ power in North Dakota is by monitoring their websites.

“We have a whole group of people, monitors all across the United States who are on these white power websites — not just monitoring them but sometimes creating chaos and havoc by throwing out ideas that get them talking about something else and throwing them completely off topic,” Garman said.

This seems to be working against Cobb. Garman said Cobb’s readership on his website has been dwindling since UnityND revealed some ugly truths about Cobb on his own page.

Cobb also recently lost support from a former grand wizard of the Ku Klux Klan, Tom Metzger, who was initially planning to join Cobb in Leith but has now changed his mind.

“(Cobb’s) view was to come into town like a brass band. I disagreed with that,” Metzger said to the Fargo Forum.

“We are still going to stand shoulder to shoulder with the people of Leith, who are of immensely strong character and just wonderful people. ... We are just expanding our reach in North Dakota and the things we want to do — and what we want to do is just include people all over the state of North Dakota.”

For Ferris, North Dakota is his home. Fighting these hate groups means fighting for what is dear to him.

“I went through my whole 44 years of life looking at North Dakota as this wonderful place to raise a family. I grew up here. I went to college at NDSU and UND. It’s been no place else I want to be and all of the sudden there is a hate group trying to take over the town.”

Knowing others take pride in North Dakota, Ferris and Garman said they believe it’s worth the fight. UnityND has certainly gained much support on Facebook, with more than 2,000 ‘likes’ in just two months.

To gain even more support, UnityND members plan to travel to all towns in North Dakota to inform residents of ways to protect themselves from white supremacists.

“Unity is always, always constantly looking for ways to include others and help people become a part of this,” Garman said.

“Our goal is to begin the process of recruiting monitors and representatives in every single North Dakota town ... go to their own town hall meetings, be proactive and do a presentation on some of what’s happening in Leith cause we can learn from that. And then also give a general presentation of how people can help.”