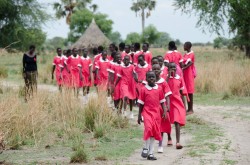 Changing the world is easier than we think. It’s especially manageable in Fargo-Moorhead. While our community has a number of fantastic, generous nonprofits, one in particular stands out as worldly meaningful and significant.

African Soul, American Heart is a boarding school for orphaned girls in South Sudan. Started by board president and Fargo-native Deb Dawson, its mission is to protect the most vulnerable young girls from forced marriage, inescapable poverty, illiteracy and other deterrents that prevent girls from living a fulfilling, healthy life. Not only that, but ASAH also helps educate and empower these girls to be leaders and give back to their communities.

The program has been building since 2008, and the school successfully opened in 2012 in Duk Payuel, South Sudan. Then, this past February, Sudanese rebels invaded the county, and the ASAH School was looted and destroyed.

“Most of the buildings are still standing; they just wrecked everything and stole anything that was of value to them,” Dawson said.

The good news is, nearly all the ASAH girls have been located and are now in the process of moving to Uganda for safety and shelter. While ASAH is now forced to rebuild, there is plenty of hope – and we can help.

Dawson’s philanthropic work in Africa began after meeting one of the Lost Boys of Sudan, Joseph Akol Makeer, in Fargo in 2007. At the time, Makeer was seeking help to spread awareness of struggling orphans by making a documentary film, “African Soul, American Heart.” So starting in 2008, Dawson helped him gather a team while making several trips to Sudan and the Kakuma Refugee Camp in Kenya, initially helping Sudanese orphans who fled from their war-stricken country and had no place to return to.

Dawson’s continued visits to Africa led to the development of the ASAH School. She, board members and village leaders decided the program would just be for orphan girls, who are considered to be the most vulnerable of children.

“We wanted to set an example by helping these girls get an education, and then they are role models for other children in the community and for parents,” Dawson said to HPR.

“People ask me often times if people are opposed to us educating girls, but they are not opposed to it – it’s just they have no history of it … And now the community, the chiefs and the church, they encourage parents to send their girls to school.”

The rebuilding process has already started for ASAH. It started a Crowd Rise campaign to raise $55,000 for covering the costs of safely transferring the girls to Uganda and replacing all the destroyed or stolen schooling and living materials, including beds, clothes, shoes and food.

“The girls literally fled with nothing except the clothes on their back, so we are kind of starting from absolute scratch again,” said Anne Denham, Dawson’s assistant and ASAH team member.

ASAH hopes to raise the money by May 10, the day of the Fargo Marathon. A group of about 11 runners, led by ASAH vice president Kevin Brooks, have taken on fundraising duties and are encouraging more runners to join the team.

It’s also possible for anyone to donate before May 10 by visiting crowdrise.com/AsahRunning.

“We’re still trucking, and there are very tangible ways that you can get involved,” Denham said. “And if that means running and wearing an ASAH t-shirt … or if it means advocating and telling people or if it means giving financial aid in order to give us away to cover these very real costs that we have.”

Dawson, who visits Africa about three months out of the year, has seen the impact of giving first hand. She’s also aware of how much help is needed.

“Literacy rate for women is something like 1 percent. One in 10 women die in childbirth. One in five children don’t live to age 5,” Dawson said.

Before the school was destroyed, Dawson held a yearly “Get Your Panties In A Bunch” fundraiser in Fargo for the orphans. All the money raised went toward new panties and washable sanitary pads to help the girls stay in school.

“Just small amounts of caring and consideration,” she said, “even just putting the energy out, people pray and things like that – these things make a difference in the world.”