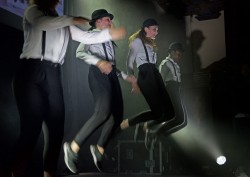 Religious affiliation in Norway has been on a steady decline in recent decades. For the first time ever atheists slightly outnumber believers, demonstrating modern society’s move toward secularization.

According to Norway’s Ipsos MMI 2016 social-cultural survey, 39 percent of Norwegians who were asked about their faith considered themselves atheist, 37 percent confirmed to believe in a higher power, while 23 percent were uncertain. Oslo, the capital of Norway, reported the lowest percent of believers in the whole country where the the older demographic had higher number of believers than the youth.

This disinterest in religion might not affect most Norwegians but St. Mark’s Evangelical-Lutheran Church in Oslo has found a modern and creative approach to preach the message of the Christian gospel in a way they hope young people can more easily relate to.

Oddleiv Sandtorv, 31, an artist and member of St. Marks, has devoted 8 years of his life in mission work. Two years ago, Sandtorv and his wife, Debora Sandtorv, a hip hop choreographer, were inspired by their desire to share the good news of “who is Jesus?,” and how he has changed their life and how he can change others’ lives. Now, in 2016 they have successfully toured all over Europe with St. Mark’s mission organization, Jesus Revolution.

“We asked ourselves: how can we make Jesus and the gospel’s message available to the youth, in a way that they can relate to and understand,” Oddleiv said.

Since a little girl, Debora has dreamt of creating her own dance show, and Oddleiv has always had a passion for singing and music. Combining their love for the arts and Jesus they decided to start musical performances and concerts with Jesus Revolution.

“This whole idea came, and we immediately started working. We took some time and prayed about it until we sensed that God was leading us to do this,” Oddleiv said.

For the last few months they have been all over Europe performing their first Jesus Revolution tour, booking shows at Pentecostal and Evangelical churches. Their last stop was in their home church, St. Marks, where they gave a performance Thursday, June 9th.

They started this dream of theirs with no money, resources, or team members, but little by little they started forming a crew of dancers, music producers, multimedia directors and sound technicians.

What makes the performance special, according to Oddleiv, is the narrative that unfolds. They share the gospel through lyrics and simultaneously telling different people’s stories with multimedia on a screen of how their life was before, what kind of a mess they were in, and then how Jesus came into their life and changed.

The mix of music, song, dance and multimedia enhances the performance, and demonstrates the variety of styles used such as EDM, hip hop, house, dubstep, drum step as the dancers dance ballet, tap dancing, floorwork and more.

“We think that we have something that is unique and different from other people, and we hope that many people can be blessed by this.” Oddleiv said.

Besides Oddleiv’s talent on stage he considers himself a preacher more than an entertainer but always dreamt to use music and art that comes with a message.

“I think I’m a preacher first and foremost and I preach through arts… I haven’t heard or seen anyone else that is doing exactly what we are doing, where you have a mix of media, dancing, music and preaching put together,” Oddleiv said.

He and his group have made an album set to come out this summer and are looking to expand their tour to the United States in the future.

“I think people focus more on the well use of religion but don’t search for the relationship with Jesus,” Debora said. “And that’s what we are trying to do - to portray the gospel in a good and relevant way that people are able to relate to and ultimately have a good time.”