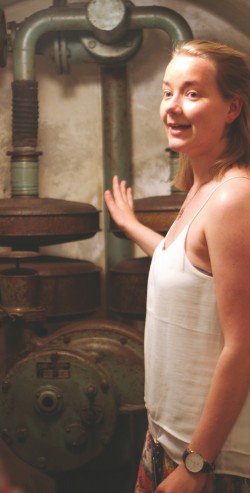 In the years since the end of WWII, little has ever been recognized in history books about one of the most important places in Nazi-occupied Europe: Norway. The Norwegians themselves don’t often acknowledge it, since it is collectively seen as a glaring blemish on Norwegian history, and justifiably so.

What is now The Norwegian Center for Studies of Holocaust and Religious Minorities, used to be the home of a man with a name now synonymous with being a traitor. In fact, after the execution of Vidkun Quisling the Oxford English Dictionary added his name and defined it as “a person cooperating with an occupying enemy force; a collaborator; a traitor” .

Much of the world is unaware that there still stands a once fully functioning Nazi bunker beneath his Oslo, Norway home.

Tucked away in the Huk Aveny neighborhood stands the former residence of Quisling, a former Nazi. His former home now houses The Norwegian Center for Studies of Holocaust and Religious Minorities to provide information about the Holocaust, and take a peek into Quisling’s life as a Norwegian Nazi.

Henriettae Ieda Borchgrevienk, an archival researcher for the museum, has ties to the house through family, and ties to the then-Norwegian military. Her grandfather was involved in the National Assembly party, which was Quisling’s version of the German Nazi Party. “Once he realized what was going on as far as the Nazi agenda he fled to Scotland due to the fact that Norwegian military officers were being arrested and he became a resistance force man instead,” Borchgrevienk said.

This bunker is not the only one in existence in Norway. In Kristiansand there are numerous bunkers spread along the coastline and even in the forest if one is just wandering around. Those that are on the coast can often be seen from boats. Oslo and Kristiansand are not the only places in Norway with former Nazi Bunkers.

The Germans were technologically ahead of their time, and they built Quisling’s bunker with curved walls to better withstand air raids. There was a Norwegian-built air purifier that could sustain the underground fortification for up to a year, and a food storage room. The living room has benches that could be used as a sitting room, hospital beds, or as additional shelves. At the back of the bunker sits Quisling’s office and bedroom with the original artwork still in it, though he used it only once during his time in the house.

He had a hand in sending thousands of Norwegian Jews to their deaths. In 1945 Quisling, then 58, was charged with high treason and, though Norway had abolished capital punishment in 1905, the government reinstated it momentarily for Quisling and his followers, and they were executed by firing squad.

“To see how they treated the Jews is terrible, I thought,” said Donald Gudmensen, a North Dakota native and veteran who served during the 1961 Berlin Crisis. Gudmensen and his family are on a weeklong vacation, meeting Norwegian relatives and touring the homeland.

For more information on The Norwegian Center for Studies of Holocaust and Religious Minorities visit www.hlsenteret.no.