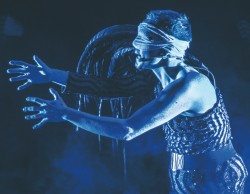 A need has developed in the LGBT community recently, both politically and personally. They are looking for solidarity, for a symbol of togetherness and progression in the face of adversity. The Oslo Fagottkor may be the answer, whether they like it or not.

Oslo Fagottkor can be simply explained as a gay men’s choir located in Oslo, Norway, but there is much more to the story. A 12-year history, a World Championship and even a Eurovision performance is only a fraction of this ensemble’s impact on their craft.

Ask around town and the responses one receives are glowing remarks about the choir. They seem to be a source of pride for many Norwegians.

“It is the most fun you’ll have at such an event,” one local fan said.

“Oh, they are so wonderful,” another fan added.

“Aren’t they fantastic,” said an admirer.

Thomas Strandberg, an original member of Oslo Fagottkor, smiles sheepishly at such compliments. He seemed surprised to hear such gracious reviews. Perhaps it’s easy to forget what an outlet Fagottkor has become for the 36 members.

It all started with a small group of friends, late night parties and a piano. They were eager singers whose only outlet growing up was the church choirs or the occasional school play.

“We had the church singing in our blood,” Strandberg explained, “And we needed to process that as grown-ups.”

As the men grew from religious choir kids into adult gay men, they began to distance themselves from the church. In 2004, when the Faggotkor formed, the relations with the Norwegian Church and the LGBT community were strained. Eventually, however, the church politics would catch up to current times and the religious recognition of gay marriage came in 2016.

“Politics are slow, but church politics are ridiculously slow,” Strandberg explained. “I’m just happy the church finally got around to it.”

Strandberg’s nonchalance at the longstanding religious struggle of the LGBT community doesn’t come lightly. The fact is, they’ve been doing church, wedding and funeral performances all along, even Strandberg’s own father’s funeral. The Faggotkor is simply looking forward to adding to their long resume.

“I hope we’ll sing at many gay weddings,” Strandberg said, “Hopefully some of ours.”

They are also looking to defend their Gay World Championship title in 2017. The World Outgames is a sporting and cultural competition hosted by various cities and put together by the gay community. In 2009, the games were held in Copenhagen, where Oslo Faggotkor earned their title of World Champions. The games were cancelled in 2013, but are being planned for Miami next year. Oslo Faggotkor will be there to seek global domination once again.

It’s no easy task, traveling the world and winning competitions. The group consists of a wide range of career-oriented men. There are two doctors, a former parliament member, PR consultants, hair stylists, bureaucrats, and a few teachers. These men all go through the same audition process to join Faggotkor. “You don’t have to prove you’re gay, but you have to prove you can sing,” Strandberg explained. “You have to prove you can carry a tune, carry a tune you haven’t rehearsed, and sing in harmony with the other guys.”

The process to join may be nerve-racking, but it typically isn’t for a short stay in the choir.

“Most people stay for a long time,” Thomas said, “I think most of the guys are in it for the long haul.”

Which may explain the deep camaraderie between the choir members.

Oslo Faggotkor has a sense of humor, one that is obviously seen in their onstage performances, especially when the stuffed beaver makes an appearance during the “Circle of Life” number. They don’t take themselves seriously, but they do take the singing seriously. There are also responsibilities placed on Oslo Faggotkor as representatives of the gay community.

Recently, with the hate crime in Orlando, Strandberg explained the choir’s position.

“Now more than ever is the time for us and everybody else to go out in the street and show who we are. If two men kissing can cause such a reaction then we need to kiss more than we ever did,” Strandberg said.

The attack in the United States was taken very personally by Oslo Faggotkor. The choir rededicates the song sung at Strandberg’s father’s funeral to the Orlando victims.

“We are all extremely affected by it,” Strandberg said, “The most important emotion for us about Orlando is that we feel what we do is so much more important. We go on stage now with a completely new sense of motivation. They need to know in Florida that they have a bigger family. Those who died are part of our family.”

This sort of acceptance attitude isn’t a new development for the men. The pride is in the choir’s own name, Oslo Fagottkor. Roughly translated from Norwegian, fagott means “bassoon” in English. Fagottkor was chosen to show their sense of humor and to show pride in being “faggots.”

This unique blend of talent, empathy, humor and political progress is performed eloquently by Oslo Faggotkor. With 12 years, a World Championship and a loyal following under their belts already, Faggotkor is one to watch for the next couple of decades.