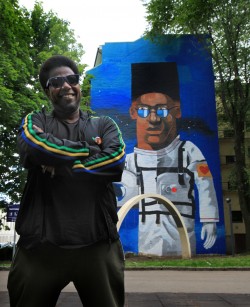 Our interview started in front of a mural that filled the entire side of a building. Brilliant with an electric blue background, the piece featured a Somalian man dressed in a spacesuit. Its creator, Cassius Erixon Fadlabi, posed for a photo in front of it with his arms crossed over his chest and a huge grin spread across his face. He titled it ‘The Sky’s the Limit.’

The mural towers over a playground in an area called Tøyen that Fadlabi explained was occupied primarily by Somali and Pakistani immigrants. Tøyen is known for its multicultural ambiance, stunning botanical gardens and The Munch Museum, which contains the largest collection of Edvard Munch’s work.

We walked to a café not far from the playground after only a few moments under the mural. The coffee shop was like most I have been to in Oslo; clean, shiny and trendy. Fifteen minutes into our discussion, Fadlabi exposed some context in the neighborhood we were in. “This area’s under gentrification. And you see it from this café. So it wasn’t this fancy before. And now what holds it a bit more diverse is that they have subsidized housing. If those disappear, you’ll see no foreigners here.” Leaving the neighborhood, however, is the Munch Museum. The museum that has existed in Tøyen for 53 years will be relocated to the bay area by the opera house in the Bjørvika area. The museum has been steadily seeing an increase in the number of visitors and has outgrown their current space.

Earlier, he had elaborated on racism in Norway, touching on how Somalis are discriminated against in particular. “Oslo is like this: there is a hierarchy of superiority, you know, that goes all the way, even among foreigners themselves. That was basically why I wanted to make a guy from Somalia who looks really cool, like really fly, with a nice haircut and he’s even a spaceman.” When asked if his work was meant to inspire the kids Fadlabi said, “I just got the wall like that and then I made the sketch to be site-specific for that neighborhood, wanted the Somalian kids that live in that neighborhood.”

Fadlabi was born and raised in Sudan. At 19 he attended The Sudan University, studied painting and political science and received his bachelors in political science. That was also around the time that he joined the Democratic Front because he said he felt it was the right thing to do.

Fadlabi explained that ultimately, he had to flee Sudan. “At some point it just because too much and I to leave the country. Because I’d been arrested so many times. And you know, arrested means like kidnapped in a way for like a week or even tortured… but that’s very common. It’s not like that’s just a story, that’s my story. It’s happening now to some people in Sudan.”

However badly Fadlabi wanted to leave Sudan, he found it very hard to get a visa anywhere in Europe and the West. An opportunity for Fadlabi to flee arose shortly after 9/11. “Europeans started doing these workshops to understand Muslim countries.”

He explained, “That was the ticket you know. I applied to a workshop in Germany, and it was called The Language of Colors; where they brought German young guys to meet some Muslim young guys. I wasn’t even Muslim then, but I lied anyway. That was my ticket out of that country.” A few years later rules and regulations had changed in Germany, and Fadlabi knew that if he applied for asylum in Germany he would be sent back to Sudan. He was 26 then, and he made plans to head to Norway to seek asylum.

In Oslo, Fadlabi earned his Masters at The National Academy of the Arts. In his second year at the academy, Fadlabi founded a weekly Monday night gallery exhibition called ‘One Night Only.’ This was a platform that blossomed for artists over the seven years that it existed. No artist, no matter how recognized would have said no to ‘One Night Only’; and at times artists put in their application to have their work shown an entire year in advance.

After growing little by little over the seven years the show ran, the artist-run project was dissolved as it had seemed to plateau. Because of One Night Only’smeticulous documentation, Fadlabi is now in possession of possibly the largest database of young Norwegian artists. He plans to put out a book either this year or next year outlining One Night Only’s exhibitions and detailing the artists that created them.

Fadlabi considers himself to be a visual artist. Although he works primarily as a painter, Fadlabi stated, “I work mostly with projects. I find some subject that I want to research and then I find the right way to talk about it through art.” “When you research the subject, it will basically tell you which medium to use.”

In one of these projects in 2014, Fadlabi and another artist, Lars Cuzner, completed a replica of a human zoo that existed in Norway one hundred years earlier. European Attraction Limited was named for the entertainment company that produced the original exhibition, and cost around 1.7 Norwegian Crowns (over $200,000 USD) to recreate. When asked to describe the exhibition in an interview with The BBC World Service, Lars Cuzner said, “We’re gonna try to recreate something that is very poorly documented; something that has been lost from the collective consciousness here, and try to recreate something that is a monument of misrepresentation, that has had an effect on this society.” The project’s completion coincided with the 100th anniversary of Norway’s constitution, and was funded by Public Art Norway.

For his most recent work, The Sky’s the Limit, Fadlabi was sought out by the local municipality to conceptualize and paint a piece on that particular wall. He was only required to provide a sketch. The process of approval took about four months, but the execution of the brush-painted mural took only about a week.

He fits his work into a barbershop style, or a commercial sign style. “If you go to a barber shop in Lagos and Dakar, you’ll find a chart with heads drawn, and they’re all drawn wrong. Everything is wrong about the head. But you’ll pick the haircut and the barber will give you the haircut and you’ll both agree that yeah, that was it,” Fadlabi said. The style uses distortions to be accurate and descriptive. Fadlabi also added that, “It’s also more free, it’s more jazz.”

Much like the motivation for Fadlabi’s latest mural, he sought artistic influences that he could also identify with. “You know everything is so Eurocentric; art history in Nigeria or Sudan, it’s European art history. So I was trying to find find a parallel one. The oldest recorded one that I could see was the Ethiopian church paintings. But those, they’re not really about capturing the similarity of the image, they’re more about capturing the essence of the image.”

He found parallels in art around the world; earmarked with similarity in pallet and distortions from people who had been displaced because of slavery in places like The United States, The Caribbean, and South America. “They all paint in a very, very similar way; as if they really learn it from somewhere.” After five years of research Fadlabi found work to which he could relate. “That was the whole point, trying to figure out a parallel painting history and not the Eurocentric one.

In the last five years Fadlabi has had work shown in Olso at Kunsthall and The Museum of Contemporary Art among many others. In 2013, Fadlabi and Lars Cuzner held a conference at The Tate Modern in London to discuss ‘European Attraction Limited.’ He has just wrapped up shows in Cologne, Germany at Temporary Gallery and in Cairo, Egypt at The Nile Sunset Annex. Fadlabi has an upcoming performance piece in collaboration with the Munch Museum this October in Oslo, and a solo show this November at The QB Gallery in Oslo. He also has shows coming up this year in Bahrain, Saudi Arabia, Jordan, and in Egypt.