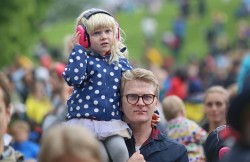 Rockslo, a concert association in Norway’s capital city of Oslo, introduces youth to music by immersing them in the process of planning and executing concerts.

Since 2013, Rockslo has been a place for young people to work behind the scenes in the music industry. From booking to marketing to technical work to production, youth under the age of 20 learn the ins and outs of what goes into planning shows, by fully planning concerts with the guidance of adult volunteers.

Erik Fosland said the process begins with the youth coming together to select and book popular artists. Right now, the organization books Norwegian acts, but it is Fosland’s dream to be able to afford international acts.

Fosland’s role with Rockslo translates to CEO, though he said that title is too formal and prefers to be referred to as a leader of the organization.

The youth also book the venues for the concerts, ensure the bands have all equipment they need, promote the shows and decorate the venues.

“Primarily, Rockslo wants them [youth] to do everything because they want them to learn everything from the beginning to the end,” Sahil Singh said.

Singh, 18, has been with the organization for two years. He usually takes photos and videos at Rockslo-produced events, though he has helped with booking when needed.

“We’re allowed to do anything if we really want to. If I say I want to be responsible for this band when they come to the concert, I’m allowed to do that,” he said. Because of the work experience he gained through Rockslo, Singh recently got a paid job with another festival.

Rockslo typically hosts four to six shows a year. Two years ago, the organization hosted its own music festival, a weekend event that Fosland would like to be hosted every other year.

Fosland said that the shows include a well-known act, an up-and-coming act and an unknown smaller act to give those artists the chance to play and learn from other musicians while talking to members they may have grown up listening to.

He believes it’s important that the youth involved in the organization, as well as the bands brought in, are able to learn.

While “rock” is in the name, the organization hosts events with whatever music young people are listening to at the time. Many of the events last year featured hip-hop artists, while this year has been focused more on rock and pop.

The volunteer-based organization receives funding support from the government to help pay for the events hosted. Since venues won’t usually make money from events that don’t serve alcohol, Fosland said venues will often donate space for shows or charge a small fee.

In addition to planning concerts, Rockslo hosts social events and collaborates with other festivals and events, including Miniøya, a music festival focused on children that Rockslo members did the booking for this summer.

To learn more about Rockslo and music and culture in Norway, visit www.oslorocksblog and http://hpr1.com/index.php/fe...

For biographies of HPR’s correspondents in Norway, visit https://oslorocks.blog/staff/