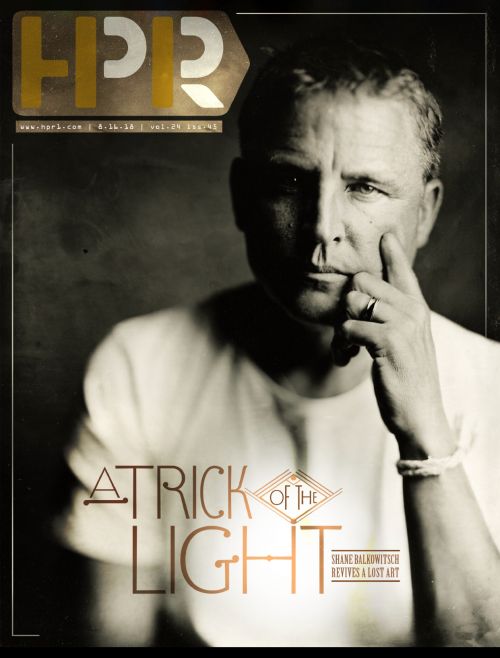 “In 2 ½ years I’ve acquired 221 plates. The end game is 1,000 wet plates of Native Americans and it’s going to take me 15 more years,” Balkowitsch said. When he started the portrait project, his initial goal was to create at least 50 plates. But his real concern was, how could he convince complete strangers to sit for him? Thanks to social media and word of mouth--much to Balkowitsch’s surprise some individuals traveled across the country to sit for him and to be a part of his series, “Northern Plains Native Americans: A Modern Wet Plate Perspective.”

In fact just last week a group of service women who were part of the Native American Color guard sat for Balkowitsch. They were travelling from Arizona to the Little Shell pow wow in New Town but their first stop was Balkowitsch’s natural light studio in Bismarck to get their portrait taken.

Ernie Lapointe the great grandson of Sitting Bull was the first Native American to sit for his series in 2014. Though the idea and real “Umph” for the project came two years later when Balkowitsch said his friend, historian, and portrait subject Dakota Goodhouse really “launched” the concept. 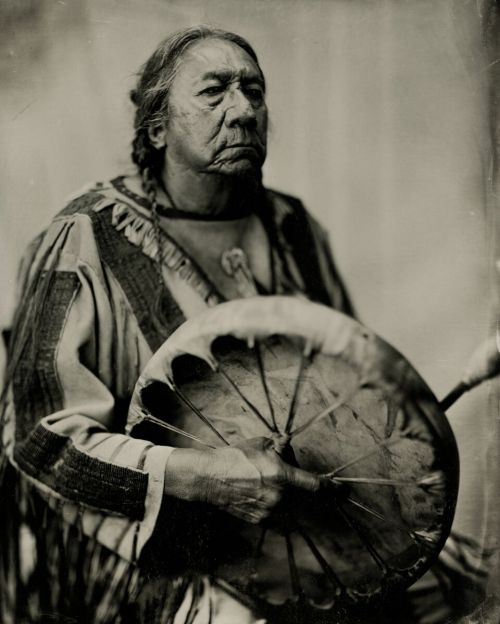 “What’s significant about plate number one is that was the plate where the Historical Society said they’d start taking my work. So Ernie’s plate opened the door for me,” Balkowitsch said.

A wet plate photographer uses collodion to create a film base on a piece of glass or metal. It is then submerged in a silver nitrate solution making it light sensitive. The photo is exposed usually in a wood bellows camera box and usually a brass lens. Balkowitsch said, “The process is called wet plate because during the entire process the chemicals on the plates must remain wet and cannot be allowed to dry.”

The images that are created are called ambrotypes and are the photo positives captured in silver on glass. The photo process used by Balkowitsch dates back to 1848, but soon went to the wayside by the 1880s once photo technology became more convenient. 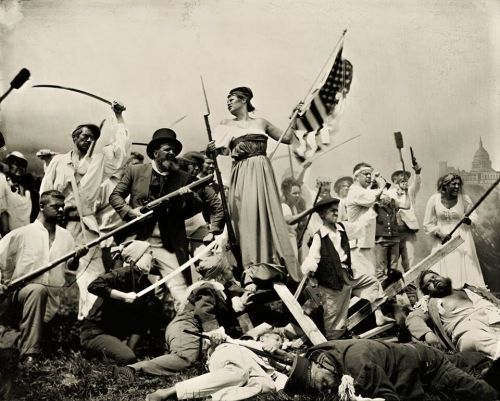 His upcoming exhibition at the Rourke consists of 26 8x10 glass ambrotypes. The pieces come from Balkowitsch’s personal collection. He said, “They are subsequent plates that came out of the series, that no one has really seen. They’re plates that sit on my wall in my studio that I share so when Native Americans come in, I have something to show them because all of the other plates go to the Heritage Center.”

In fact, the State Historical Society of North Dakota (SHSND) is currently archiving his work and have 226 of his plates as part of their collection which includes both his Native American portraits and fine art plates.

“Shane, using an early photographic process is capturing this generation of Northern Plains Native Americans. Like photographers before him such as Edward Curtis and Frank Fiske, Shane’s portraits also speak to his contemporary point of view.” Executive Director of SHSND Claudia Berg said, “In the past the resulting photographs depicted the photographer’s vision. In Shane Balkowitsch’s work each person has chosen how they want to be portrayed- this project is a shared vision of the sitter and the photographer.

Balkowitsch’s passion and spirit of collaboration led to some compelling imagery. In fact the images in the series are downright striking. Many of the subjects proudly wear traditional regalia, while other images expressed political commentary during the DAPL protests. 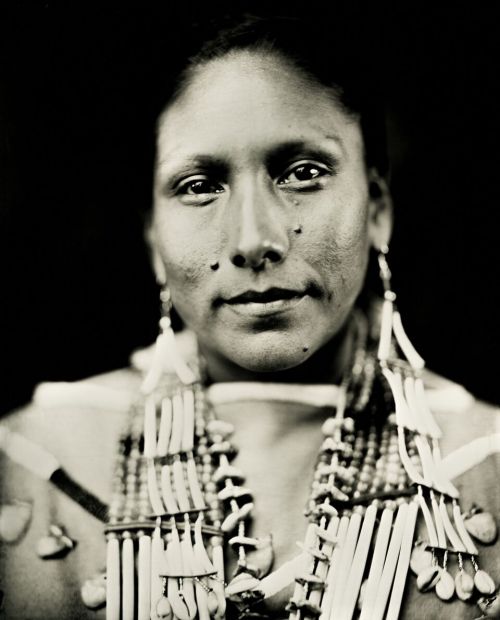 Balkowitsch says that someday he would like to publish a book of his images but there’s one stipulation. He said, “I refuse to make any money on this series, so if there are any kind of profits from that book or whatever it would go to the publishing of that book and it would go to the American Indian College Fund.” It is a non-profit that he has been supporting for over a year now. So far he has donated over $3500 to the organization. He will also be selling prints at the Rourke on August 25, the proceeds will of course go toward the college fund.

“I understand you can do clean water and you can do other things but if you can help with higher education you can help all these other situations. It’s a trickle down. A lot of things solve themselves with higher education.” He went on to say, “You can get a better job, you can get more money, you can take care of yourself better, and provide for your children. You can help more than than one person if you help one student.” 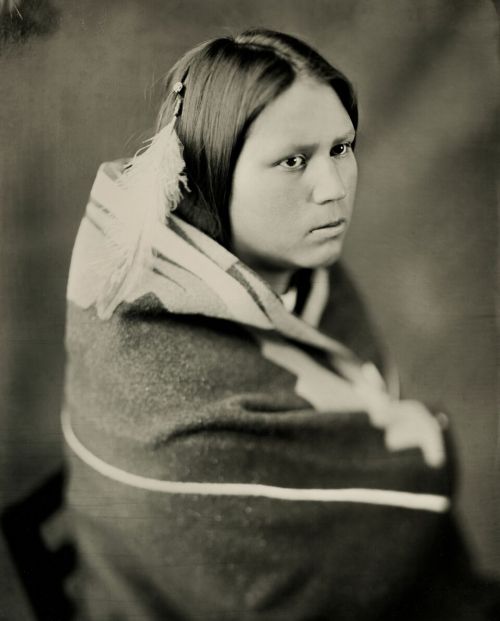 The spirit of collaboration
It’s no secret that Shane Balkowitsch knows how to foster community. On July 21 of this year he and over 50 collaborators partook in a large scale wet plate shoot recreating the 1830 painting “Liberty leading the people” by Eugene Delacroix an iconic painting created during the French Revolution. With the spirit of revolution guiding him, Balkowitsch envisioned an American Lady Liberty leading the people. In his piece titled, “Liberty trudges through injustice.”

“Once a year I like to bring the community together to get together and share their talents.” He said as a crowd of artists, actors, reenactors, stylists, theatre costumers and even the fire marshall assembled that day. One person travelled all the way from Saint Louis to be a part of the action. An air of excitement filled the set as military grade smoke bombs went off and the subjects of the plate brandished period correct weaponry lent to Balkowitsch by the Lewis and Clark Interpretive Center.

“Fifty-three adults get together on a weekend for what? To make an image together. No pay, everyone just contributes. That’s a fostering thing that started with “Murderer’s Gulch,” and then “The Capsizing of Humanity,” so it’s getting bigger--there’s this momentum!” Balkowitsch said. 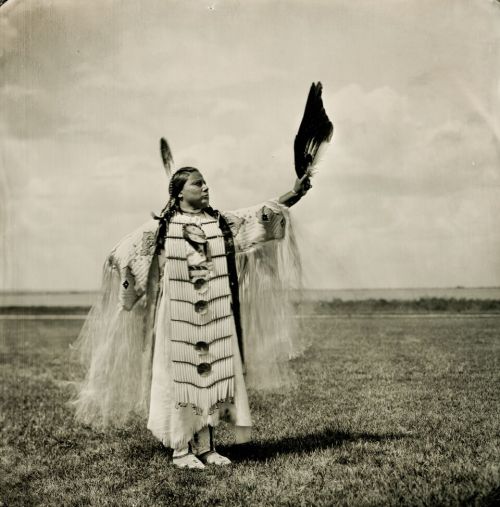 This is his third large scale collaboration. Balkowitsch’s plate “Murderer’s gulch” paid tribute to Bismarck’s own local history and was inspired by a Jacob Riis photograph taken in 1888. The following shoot “The capsizing of humanity” was based off of the 1819 painting “Raft of the Medusa” by Theodore Gericault.

The planning has already started for next year’s piece, it will be based off of “The Olympians", by Nicolas-Andre Monsiau. He stresses that the key to any of these collaborations is to establish a sense of trust and community.

Now Lady Liberty’s flag hangs proudly in Balkowitsch’s studio along with countless plates he’s created as well as artifacts from past shoots. These collaborative pieces too have a spot at the historical society along with his iconic Native American portraits.

“By accepting my art piece they’re accepting all these people’s art piece. I’m not going up there myself. I’m going up there with you and everyone else who’s collaborated, so that’s important to me.” Balkowitsch went on to say, “300 years from now I don’t need some big exhibition of my work or anything. I have this idea of a curator or archivist on their first day seeing ‘Liberty trudges through injustice’ looking at the plate, they turn it over and on the back of the plate is all of our names and as they read these names, romantically, I think for a moment that we all live again.” 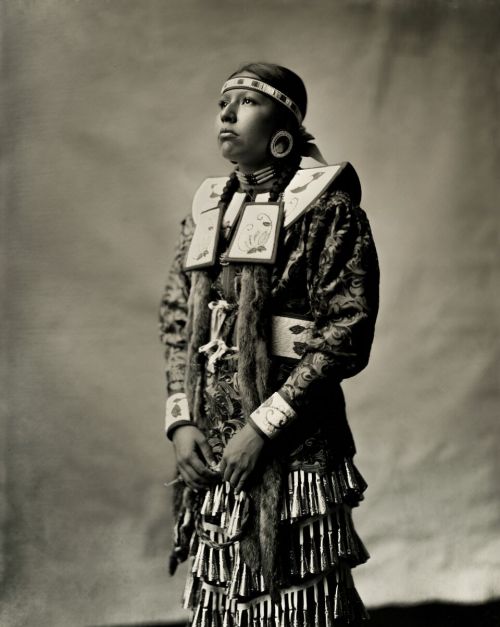