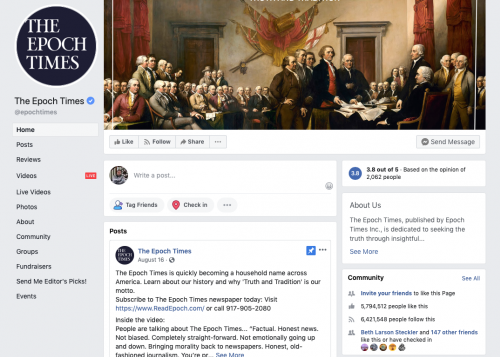 Four political earthquakes have shaken international trust at the highest levels, but an additional threat in league with a foreign influential cult has snuck in, and looms over them all.

The first accusations of international collusion were sparked with Russia and the Mueller probe – an attempt to find out how deep Russia influenced the 2016 elections in America. Nearly three years later, U.S. President Donald Trump’s candid pressure of Ukraine President Volodymyr Zelensky to investigate a political rival came to light.

More recently, Trump also allegedly attempted to pressure Australia’s Prime Minister Scott Morrison to investigate the origins of the first Russia probe. Under suffocating scrutiny, Trump has further claimed his rivals are planning a coups d’état, and hinted at civil war if he’s impeached, but then turned to China for help to investigate a political rival.

Now, the rapid rise of a publication called The Epoch Times, founded by members of the Chinese spiritual movement – Falun Gong – is laundering disinformation, “alternative facts,” and conspiracy theories in Europe and the United States, and they’ve won the support of millions. Their online posts sprinkle articles spun in Trump’s favor with touchy-feely pictures of swans, dogs, and “beautiful little” girls.

Before 2016, The Epoch Times stayed away from U.S. politics, according to CNBC, but since Trump’s election the organization’s ad strategy and story content have doubled revenues, according to tax filings. As The Epoch Times rose to prominence on the world’s stage, it has also garnered one of the largest social media followings of any news outlet. 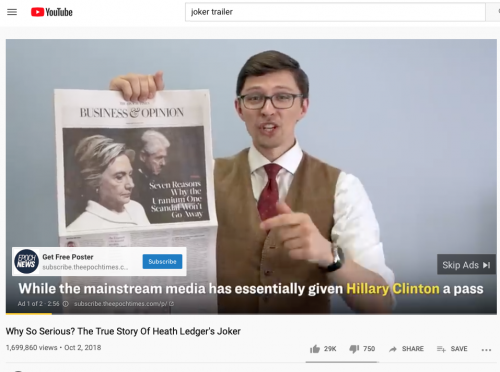 According to Internal Revenue Service records, the Epoch Times Association Inc. has exploded financially in the last six years with a reported $75,502 in net income in 2013. Declaring themselves to be an organization “established to provide information to the Chinese communities in New Jersey and New York” including international, national, and local news that reflect society, the organization received $8,143,806 in advertising and other income in 2017.

The Epoch Media Group was founded in 2004 with “an unwavering commitment to freedom of the press and truthful reporting,” the organization’s website reported, adding an obscure report that it is considered the “most credible newspaper in the world” by President Donald Trump.

“Founded as an antidote to communist propaganda, today we’re quickly becoming a household name across America,” an Epoch Times video reported one of its Facebook pages, which has 6,421,425 followers.

Although the White House did not confirm the account, Trump and his son Donald Trump Jr. have repeatedly tweeted stories published by The Epoch Times. In May this year, Lara Trump, the President’s daughter-in-law, sat down for a 40-minute interview with the paper’s senior editor, according to CNBC. Local media outlets in North Dakota have also shared stories published by The Epoch Times, pronounced epic times.

The Republican Party has also fallen for the media outlet’s misinformation, as it was a “major player” in this year’s Conservative Political Action Conference.

The Epoch Times began in 2000, according to other media sources, and it brags of having 45 million readers in 35 countries and in 21 languages. In May 2018, the organization began printing five days a week in New York City and Washington, D.C.

Some of the stories The Epoch Times has run recently include “Ivanka Trump Asked About Lessons She Learned from Her Dad, She Listed 5 Principles,” anti-vaccination, Qanon, and “Pizzagate” conspiracy theory stories, how illegal immigrants are killing university students, how “The Chinese Miracle Is Over,” and dozens of articles with positive spins on Trump’s recent political woes.

With a focus on “Spygate,” Epoch News reporters publish distractions, saying the real heart of the Russian investigation is the illegal American spying on Trump’s campaign as the “biggest political scandal in modern history.” At the same time, the publication has little to no mention of scandals that have plagued Trump’s administration since before Trump took office.

On The Epoch Times Chinese language websites, many articles are focused on Trump’s Administration’s condemnation of China for civil rights abuses including organ harvesting against Falun Gong adherents.

In July this year The Epoch Times was banned from buying Facebook ads, even though the organization purchased approximately $1.5 million on 11,000 pro-Trump Facebook ads, according to Facebook’s advertising archive, which is more than any other organization outside of the Trump campaign. Strangely enough, The Epoch Times continues to buy subscription advertisements under false names including “Honest Paper” and “Pure American Journalism,” according to the New York Times.

In one story BuzzFeed News calls The Epoch Times: “A Newspaper Banned In China Is Now One Of Trump’s Biggest Defenders,” and the “purest outlet of the Trump movement” promoting paranoid claims that puts right-wing media outlet Breitbart to shame.

In Germany, The Epoch Times is called “The Obscure Newspaper Fueling the Far-Right in Europe,” according to The New Republic.

“Behind the scenes, ownership and operation of The Epoch Times are closely related to Falun Gong,” the International Chinese Court reported. “Falun Gong is a spiritual cultivation organization with the goal of overthrowing the Chinese government.”

According to City University of New York Ming Xia, a researcher of Falun Gong, the spiritual movement is a mix of Buddhism, Taoism, meditation, and gymnastics mixed with Li Hongzhi’s controversial teachings. Li teaches against homosexuality, feminism, and popular music, and claims to be a god that can float and walk through walls. In short, Falun Gong to its practitioners is like fast food to immortality.

The Epoch Times is also a powerful lobbyist behind anti-Huawei sentiment in America. On December 20, 2018 the organization hosted the “Huawei Exposed” event in the National Press Club in Washington, D.C. describing the private telecom company as a “tool of the Chinese Community Party.”

Other headlines the publication uses are meant to incite left against right, Republican against Democrat, while Trump tweets about an impending civil war if he is impeached. The news section is filled with stories condemning China, while its editorial section praises Trump’s efforts to rid America of all socialist-like programs.

Closer to home, Jason Bohrer, president and CEO of the Lignite Energy Council has been featured in articles for the Fargo Forum, and other publications, but Bohrer, along with Attorney General Wayne Stenehjem, former Governor Jack Dalrymple, and others, were also included in an Associated Press story entitled “North Dakota Mulls Lawsuit Over New Greenhouse Gas Limits,” which was republished by The Epoch Times on August 6, 2015. The article criticizes Environmental Protection Agency’s tightening of regulations on power plant emissions. 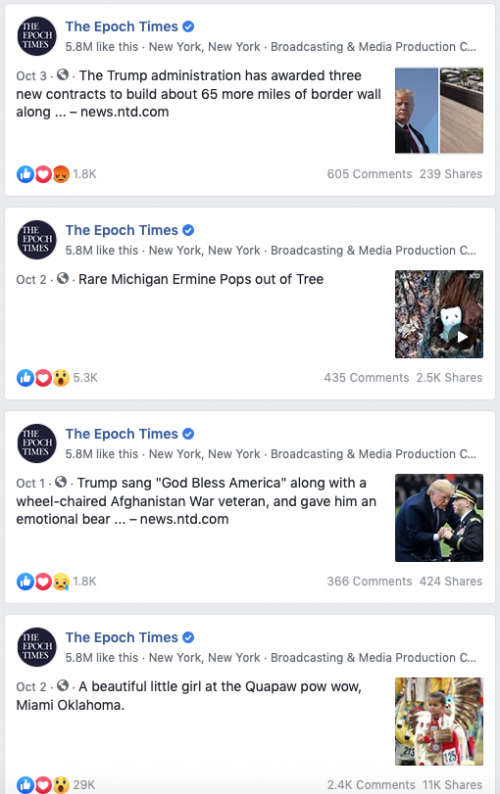 Epoch Times reporters have also written about Trump’s tax cuts for North Dakota, have contributed to stories as recently as August 29 with the body of a missing Fargo woman, Brenda Kartes, which was originally published by Valley News Live.

A current producer for Valley News Live’s POVnow, is a fan of The Epoch Times, liking Coverage of the Trump Presidency by the Epoch Times page, which has more than 584,000 followers. The page’s banner advertises interested parties to buy a “Spygate” poster of a Trump special edition.

KFYRTV, the local FOX News affiliate, used an Epoch Times photograph on April 26 this year along with an Associated Press story pertaining to how Trump supports measles vaccinations.

That The Epoch Times publishes Associated Press stories is only one avenue they’re using to legitimize the publication and mainstream their political agenda. They’ve also tried to buy credibility in North Dakota by publishing stories about a North Dakota agent who tried to shield former First Lady Jacqueline Kennedy and President John F. Kennedy, and about a 17-year-old who was gored by a bison at Theodore Roosevelt National Park.

The Epoch Times is a publication searching to further the divides between America and China, being referred to as a legitimate source in dozens of articles pertaining to the opioid crisis and how China is waging “chemical warfare” against the United States by exporting fentanyl on the black market. One such story was written by The Epoch Times and republished by Amac, Association for Mature American Citizens.

China is hostile and foreign, according to the September 5 story, which also claims the China’s Central Government is behind the illicit sales.

The Falun Gong is a cult that rose in China in the 1990s, with a membership that soon surpassed Communist Party members at that time. Before the cult was banned in China, adherents embarked on a widespread evangelical-like campaign warning Chinese citizens that they must cut all affiliations with the nation’s ruling party if they wanted to survive an upcoming revolution, a kind of “communist hell.”

Falun Gong’s founder, Li Hongzhi, fled to the United States after China outlawed the cult, which believes its practitioners can achieve supernatural skills through a combination of meditation and exercise. Such beliefs are ancient, and were unsuccessfully revived in 1900 during the Opium Wars in China.