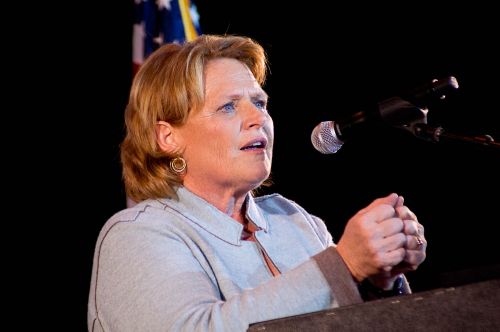 FARGO – A day after a Republican attack on her voting record, U.S. Senator Heidi Heitkamp struck back against her opponent, saying current Congressman Kevin Cramer is irresponsible and is voting to hurt North Dakotans.

She slammed Cramer’s support for a Texas-led lawsuit that North Dakota Attorney General Wayne Stenehjem has brought the state into as dangerous. The lawsuit against the United States by a total of 20 states seeks to completely repeal the Affordable Care Act saying since the law’s mandate is no longer valid, the entire law is unconstitutional.

Using an old Stalinist line, Cramer has also called Heitkamp an “enemy of our country” during an interview with POLITICO for her efforts to thwart President Donald Trump’s trade war, and while the ND GOP claims Heitkamp is a Republican in disguise, as she has voted in line with President Donald Trump’s Administration “half of the time,” Heitkamp said that her job is to represent the people of North Dakota.

During a press conference with national media outlets, many of which have also been consistently labeled as enemies of the state by Trump himself, Heitkamp focused on the Texas lawsuit and Cramer’s voting record. 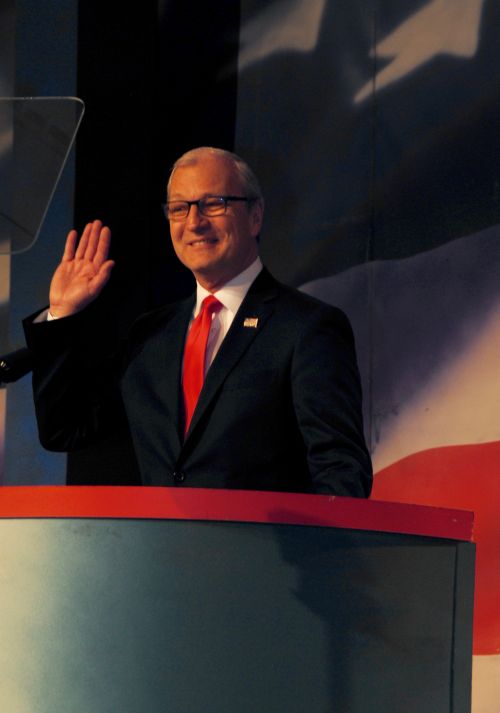 “Where we were six years ago, when I said there is good and bad in the health care law, we are going keep the good and fix the bad,” Heitkamp said. “During that time period Congressman Cramer voted against the ACA 64 times, never really reforming it, and then after he voted against the ACA without a replacement eventually the bill that he voted for in 2017, the President of the United States called that bill mean, meaning that it would make health insurance less affordable, take away pre-existing conditions, and basically make it harder for middle class families to afford their health care.

“I voted against a bill that I thought was equally mean, and what happened with Medicaid. But the important part of that story is what happened after that. After that I rolled up my sleeves and got to work to introduce a reform bill that could afford different protections and affordability to many North Dakotans.”

Mary Wakefield, a Devils Lake native and top health care expert formerly serving as the deputy secretary of Health and Human Services until 2017, said the ACA ended discrimination against those with pre-existing conditions, and to go back to the days where insurance companies can choose caps for medical treatment, or decide who they will cover, is a dangerous move, especially for rural hospitals.

“If thousands of North Dakotans lose coverage or are denied coverage that is a financial impact on hospitals in rural communities, Wakefield said. “People will once again be unable to pay for needed health care. Our rural hospitals typically do not have deep financial pockets.”

Jennifer Restemeyer of Fargo has a 16-year-old daughter, Allison, who has a rare genetic disorder, and requires $12,000 in specialized therapy related to her disorder every week.

When the ACA passed in 2010, she had already reached $1.75 million of her $2 million lifetime maximum coverage. The ACA took away that cap, and if the Texas lawsuit is successful in repealing the ACA, Restemeyer has little hope that her daughter will survive, if they lose their health insurance.

“Right now we have coverage from my husband’s employer, but if we were to lose the protections of an insurance company, if they were able to say no we can’t cover you, if my husband was to change jobs or lose his job for any reason, she would lose her coverage,” Rustemeyer said.

The medication her daughter is on slows the progression of the disorder, she said. In previous years Rustemeyer reached out to Heitkamp and Cramer, even went to one of Cramer’s Town Halls.

“I was disheartened, my questions were brushed off,” Rustemeyer said.

Ellen Linderman, from Carrington, has the same worries. She had an eye surgery when her husband worked for state government, but now that he is a farmer, she knows that a repeal of ACA will disqualify her from coverage.

“I was being punished for something I absolutely had to do for my well being,” Linderman said. “This idea of going back to not covering pre-existing conditions just floors me.”

Heitkamp has a history of working across the political aisle attempting to address the concerns of health care affordability that does not throw people off their health insurance policies.

“It’s clear to me that there has been for him much more of an interest in political talking points than solving this problem,” Heitkamp said. “It’s clear that the bill Cramer voted for in the House would seriously undermine those with preexisting conditions.”

Grand Forks attorney David Thompson is running against incumbent Stenehjem for North Dakota Attorney General. He has submitted an open records request to the Attorney General’s office, but was denied citing ongoing litigation.

All questions from HPR Magazine to the North Dakota Attorney General’s office were deferred to Texas.

Stenehjem has claimed that no state resources are involved in the Texas lawsuit, but Thompson disagreed.

“North Dakotans are asking: Which is it, Wayne? Either the Attorney General’s Office worked on the lawsuit or not, but Stenehjem continues to deny that any his office has anything to do with the harmful impacts this lawsuit will have,” Thompson said in a press release.

“If anyone on Stenehjem’s staff looked at the lawsuit, public resources were spent on this case. It is frankly an unbelievable statement, especially when the health coverage of hundreds of thousands of North Dakotans is at stake. Meaningful and effective health care insurance coverage should be available for all North Dakotans at a reasonable price for them without discrimination against them for having a pre-existing condition. Wayne should either own the fact that he supports the goals of this lawsuit or withdraw North Dakota as a plaintiff.”