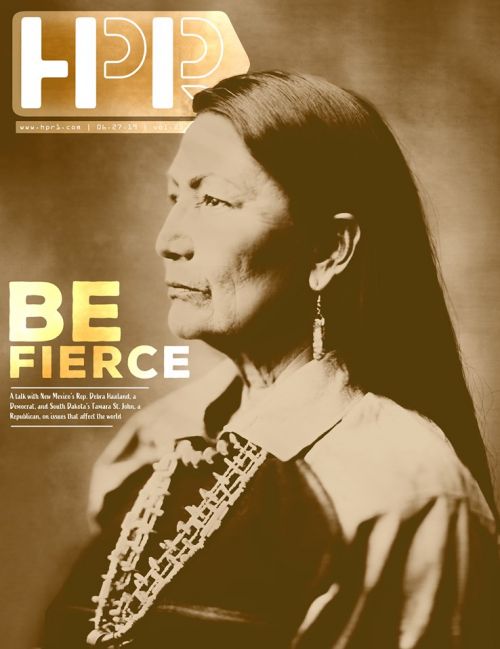 BISMARCK– In 2016, Debra Haaland cooked green chili and tortillas at the Standing Rock Sioux camps pitched against the Dakota Access Pipeline. Bringing food was her traditional way of contributing to the fight against the $3.8 billion pipeline.

She stayed in the camps for four days that September, but the environmental cause she came to support has resounded not only within her, but around the world.

“I first saw it on Facebook, but more and more people were coming out here from New Mexico and posting their experiences on Facebook and I just realized that I should come,” Haaland said. She is now one of the first female Native Representatives for New Mexico.

She had just finished speaking at the North Dakota Heritage Center in support of wet plate photographer Shane Balkowitsch’s release of his first photographic book “Northern Plains Native Americans: A Modern Wet Plate Perspective (Volume I).” Other media outlets had left. The line of North Dakota supporters bringing her gifts had dwindled to a trickle. 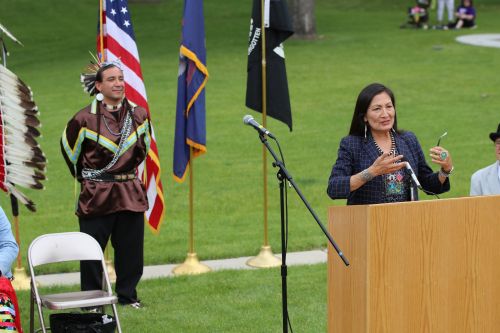 Haaland is Pueblo of Laguna, a tribe that settled far from the Great Plains, but her interests regarding the environment should resonate the 1,200 miles to North Dakota, especially with new projects – the Phillips 66 so-called “Freedom Pipeline” and a DAPL expansion – looming on the horizon, she said.

Standing Rock didn’t lose in February 2017 after President Donald Trump signed an executive order to “get that pipeline built,” she said.

“I felt like we really had hit on an environmental movement that was deep and meaningful,” Haaland said. “It just seemed so amazing that so many tribes came together, because tribes came from everywhere to stand with the water protectors. It was significant that so many of us came together to protect water, our natural resources.

“It was absolutely a boost to the environmental cause, I think it woke a lot of people up and it activated a lot of environmental activists all over the place. We’ve been able to fight back some on those issues in New Mexico and have had folks that have been on the front lines. Any time when people rise up and protect what they have it’s going to activate people.” 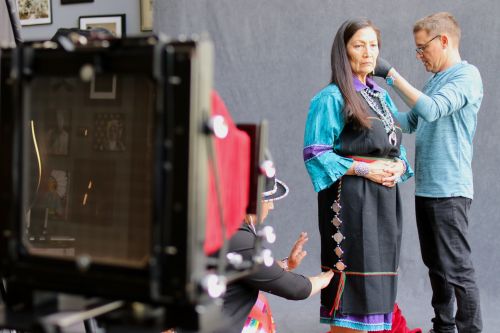 Standing Rock’s message to the world, even after 836 activists were arrested with most of the cases thrown out of court or suspects proven innocent, spurred preemptive legislative strikes in six states that originated with the bill mill ALEC, or the American Legislative Executive Council. The proposals, two of which passed in North Dakota, were aimed at countering future protests by strengthening penalties against protestors and supporters.

“There shouldn’t be penalties for protests, it’s our Constitutional right,” Haaland said. “I am whole-heartedly against any of that. Any of those right wing organizations that mean to stifle the American spirit are counter to everything we believe in as Americans.

“White supremacists were marching in the streets of Virginia and the President supported them,” Haaland said. “When people rise up to defend our environment the President should support them also.” 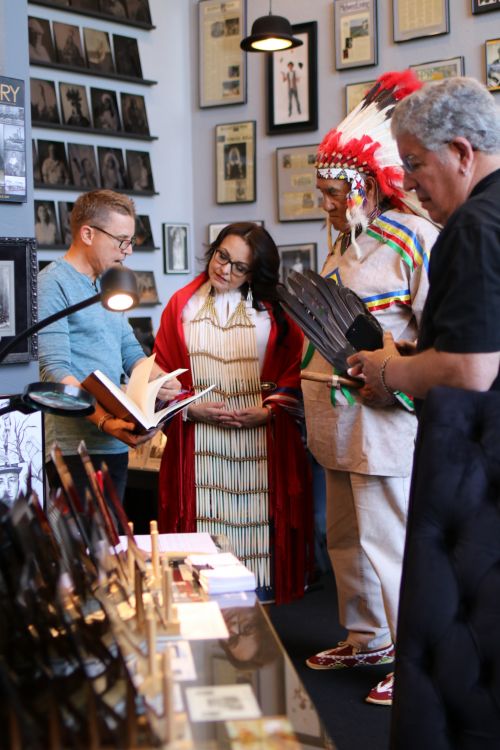 South Dakota Representative Tamara St. John, of District 1, is a registered member of the Sisseton Wahpeton Sioux Tribe and is also a Republican, but says she is unique in that she cares about the environment, and doesn’t want a DAPL repeat.

“I am a conservative, but what’s more conservative than conservation?” St. John said. “Our concerns are all the same, we all care about our lands, our lakes, our clean air, clean water. The farming communities have equal concerns as tribal communities. We all realize we need these things to live, and for the next generation.

“We all need economic development but not at the expense of not having clean water or clean air. Federal regulations must be enforced. What affects us as a tribe also affects our neighbors.”

Although St. John supports the right to free speech, she believes the most efficient method to fight big oil greed is in the judicial system, she said.

“I understand the importance of protest, but we all need to work the system and take these battles to court,” St. John said.

Timing is paramount, Haaland said. There is little time left for the world to counter climate change.

“This Administration – all they care about is the fossil fuel industry,” Haaland said. “Right now our public lands are emitting 25 percent of the carbon that goes into the atmosphere in this country. That’s despicable. It’s going to get worse, in my opinion. We have to win this next election if we want any chance of saving this planet.

“When we’re thinking about our environment you can destroy faster than you can rebuild,” Haaland said. “You can cut down a 500-year-old tree. That tree is never going to grow back like that again. Climate change is real, and I’m going to fight to the bitter end to protect our environment because it’s the only one we have and our environment gives us everything.

“I am doing everything I can in Congress to protect our environment. There are things that are more important than money, and I have never been motivated by money.” 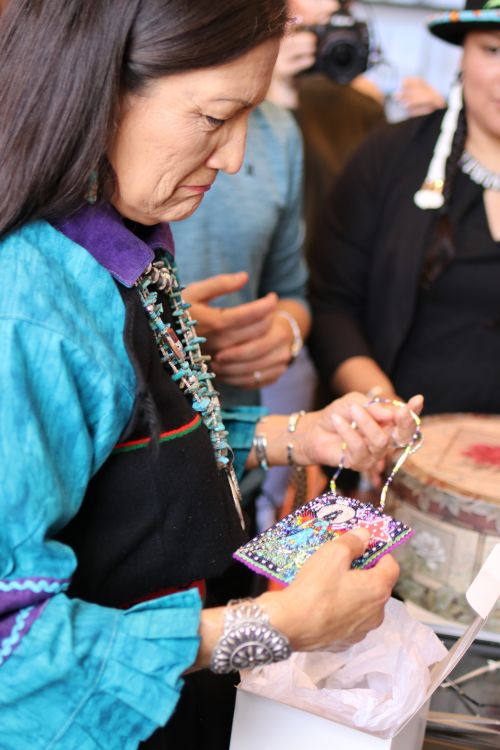 A year after approximately 60 Natives ran for political office across the country – many of whom were elected – Ruth Buffalo, the newly-elected Native representative for South Fargo, and other women in leadership across the state have been harassed and threatened, sometimes even by their own political party.

Haaland’s message to women in North Dakota was to remain strong and hopes that nationally, more women will run for office.

“My campaign slogan was ‘Be Fierce,’” Haaland said. “Be fierce for everything. Be fierce for the environment. Be fierce for women. Be fierce for children. Women throughout history have been… it seems like forever that our voices have been silenced. They work really hard to suppress us and we are incredibly strong and resilient. We need to keep standing up for the things we believe in.

“They just need to keep stepping up.”

No one asked Haaland to run for office, she made the choice herself, she said.

“We would like to see more women and more women of color in office,” Haaland said. “Women have different perspectives. We’re the nurturers, were’ essentially the caretakers of our families, and in Pueblo culture women – we’re a matrilineal society – so we would follow the women’s line. When the Spanish came in late 1500s they excluded women from their government, which the Pueblo Indians adopted, so it’s been hard for women to break through there.”

“You know, there’s a statistic out there that if you ask a man to run for office he’ll say yes the first time, but it takes a woman seven times to say yes,” Haaland said.

“As a Pueblo, we’re raised in communities, separately in our own family. We’re not just islands. We’re a part of a community and we are responsible for that community, and so we tend to think many, many other people before we think about ourselves and just think about our family.”

With 23 Presidential candidates and rumors of a growing Democratic rift between support for Senator Bernie Sanders or Senator Joe Biden, Haaland believes that voters will still be able to relate to those whose messages are shared the most. She made no prediction on who she will support, but is waiting to see whose message will resonate the loudest.

“I’m a progressive Democrat, I am who I am, and I am just not another person to call out other Democrats,” Haaland said. “I believe it’s our values that make us Democrats and it’s not up to me to question values. I will vote the way I vote and in Congress I’m going to vote for background checks and I am going to vote for waiting periods on guns, and for equality because I don’t think we should discriminate against anybody in this country.

“I don’t want children, immigrant children, thrown in cages. I am going to support common sense immigration laws that give people a legal path to citizenship.”

Most of the time Democrats will vote the same as her on the issues she cares about the most, she said. She searches for common ground not only in the Democratic Party but across the aisle as well, she said.

“I’m not trying to find ways to divide us,” Haaland said. “I want our party to be strong and we need to do it together. Either their messages will resonate with the Democrats in this country or it won’t. Let the process play itself out. I am going to wait and see; I’m not going to foresee anything. When it comes time to vote in the general election we need to stand together.” 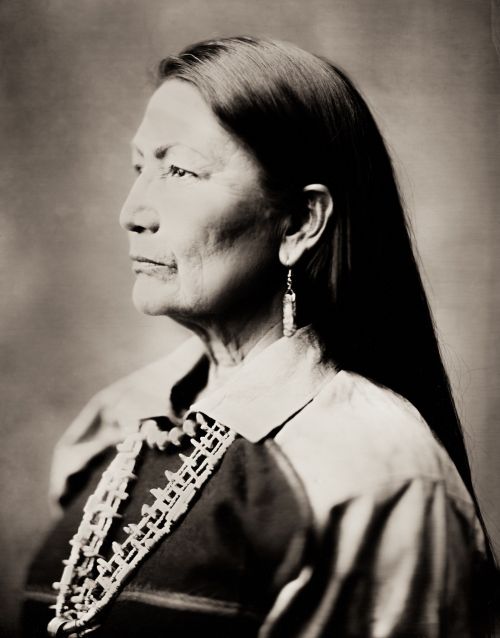